The survey’s demographic questions regarding ethnicity are US-centric. We acknowledge that’s not ideal, but it gave us a baseline to start with. For this and other reasons, the ethnicity section was optional, with “prefer not to say” as an option. This is to respect that the locus of identity is within the individual.

“How would you describe your ethnicity? US-centric, feel free to choose ‘prefer not to say’ or choose as many as are applicable.” 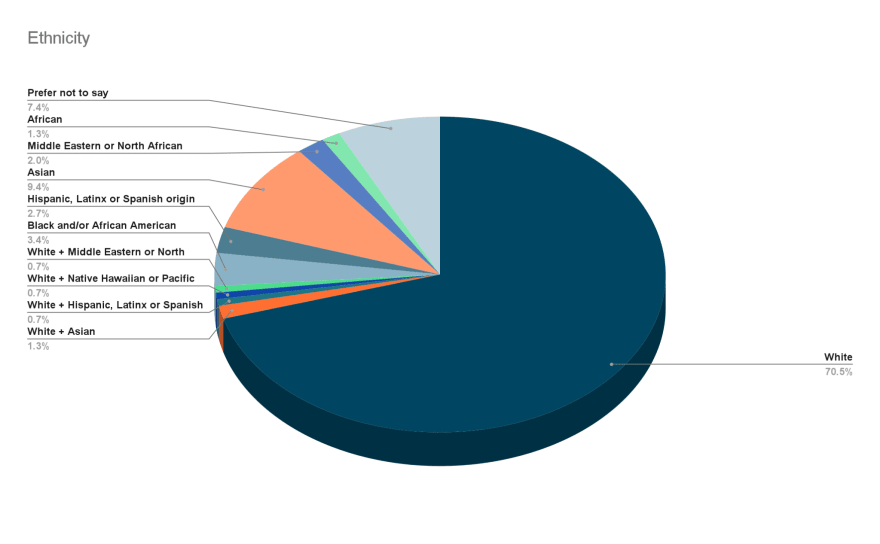 In response to the multi-choice question “How would you describe your ethnicity?” 7.4% declined to state; 70.3% answered White; 9.4% Asian; 3.4% Black and/or African American; 2.7% Hispanic, Latinx or Spanish origin, 2.0% Middle Eastern or North African (MENA), and 1.3% African. Multiracial responses account for 3.4% combined; all of the multiracial responses included White as one of the ethnicities.

Race and ethnicity are not synonymous. For example, it’s possible to be ethnically Latinx, but Latinx is not a race4. While understanding that the measures currently in use are imperfect (and that the choices themselves are US-centric as noted previously) we wanted to give people options that were meaningful to them on their own terms.

Regarding the “Asian” category, Asians and Asian Americans have been shown to have drastic variation in income when national origin is factored in5. Asians simultaneously must battle the harmful model minority myth6. Because of these issues, we initially planned to disaggregate the data but due to the small sample size, that was not possible.

Other studies have shown that Asians and Asian-Americans are underrepresented at the management level in the tech industry, with a 2017 Harvard Business Review report finding that despite making up 12.5% of the professional workforce (and 5.6% of the overall US population) Asians were the group least likely to be promoted to management7. We would have liked to see if this all carries through to our specialization, but the sample size was too small for any meaningful conclusions at this time.

For more about AAPI workplace issues including salary and promotion data, visit
— 5 ”Why Disaggregate? Disparities in AAPI Income”, AAPI Data
— 6 ”How the Model Minority Myth of Asian Americans Hurts Us All”, TIME Magazine
— 7 "Asian Americans Are the Least Likely Group in the US to Be Promoted to Management”, Harvard Business Review

To split the data, we first note that (unlike Gender) there are some multiple-replies (5 total) which have both “White” and “something else” selected. We’ve put replies that had only “White” selected into one group (104 replies) and all the rest into the second group (44). This is clearly not ideal, for a variety of reasons. We hope to have an increased number of responses in the future to allow more nuanced reporting.

The data we collected shows the gender pay gap remains around 7% with ethnicity included.

As for the ethnicity pay gap, it’s there but smaller than what we see for gender :

That’s around a 4% increase for the just-white group over the other group (with a 90% credible interval between 12% and -4%), which is a much less certain result. This is due to the fact that more of the “mass” of the graph hangs around 0%, so our data is less sure of there being any real difference. Anecdotally we know that the effect is real though, so we can conclude within reason that we don’t have enough data points to show the difference, especially since we’re lumping a lot of different ethnicities together, which isn’t ideal.

When asking whether people were managers, we realized management can take different forms. So we checked for both “Strategic Manager” and “People Manager.”

In response to the question “How would you describe your ethnicity?” we only have 16 replies from people who checked “Asian” (including multi-racial,) and only 2 of those have “People Manager” as Yes. However, we can still try to estimate the effect, even with a small sample size:

A note about this plot: Please bear in mind that we are discussing probability, so there are no units. (Probability is unit-less, and ranges from 0 to 1.) What’s relevant is that the scale is linear, so a point twice as high is twice as likely. The y-axis represents the likelihood of a given difference between the groups, on a linear scale. We’ve provided the visual representation to help understand the uncertainty in a more nuanced way.

Given we have a very small sample from Asian respondents as a subgroup in the data, the hypothetical model isn’t very sure, but it does back up the statement above – people of Asian ethnicities are around 15% less likely to be at manager level, based on our data.

We hoped to provide more insights around more ethnicities. Unfortunately, due to the small sample sizes involved that was not possible in this round. We did the best we could at present, by discussing the two largest groups we have data for. We are acutely aware of the existence of issues facing underrepresented and marginalized ethnicities in the tech industry, and we’re striving to improve this for the next round.

If you’re interested in helping us collect responses from a wider representation of humanity in our next survey, please reach out to team@devrelcollective.fun. We would gratefully welcome the assistance!