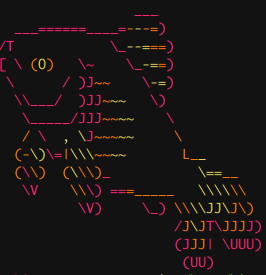 The command line is a powerful tool, and sadly forsaken by most of us.

The goal of this post is to reconcile some of you with the CLI (Command Line Interface), wether you are a developer or not.

When coding, we find ourselves confronted to this choice: IDE or text editor + CLI?

I prefer learn to master each tool, probably more deeply than in an IDE, even if it requires more time, than let the IDE do all the stuff for me and be stuck in case of problem.

It may seem philosophic, but in an IDE, we may sometimes feel constrained and restricted to the proposed features whereas in the CLI, there are plenty of tools, scripts, frameworks for many use cases, many environments, many languages... And the power of Unix allows the interoperability of all these commands.

fish shell (or "fish") is a shell oriented to the user interaction, in opposition to Bash which is more scripting-oriented. Thus, it's a good candidate for a daily and interactive usage.

It includes native syntax highlighting for many commands and tools, and autocompletion is, as well native.

Zsh is another credible alternative for this kind of use-cases.

Here is an example of autocompletion with git:

By typing git, then <tab>, fish propose the list of the git commands (checkout, commit, log, ...). By pressing several times <tab>, we can browse the commands until we reach the desired one, and then we just have to click on <enter> to validate (e.g. git checkout), and here fish shows all its magic: it's able to autocomplete the list of the git branches of your repo! Of course, it works with many other tools than git.

Both of them allow to install themes for the prompt and plugins.

At first sight, customize his prompt may seem useless, but if the CLI is your main UI, then it becomes mandatory.

It allows to know, among others, for git:

There are dozens of prompts available, so everyone will be able to choose according to its own preferences. On my side, I selected two of them: bobthefish and neolambda​, that you can install with oh-my-fish : omf install bobthefish.

The first one, highly visual, is based on powerline, a status-line for Vim that includes many patterns and symbols to make it more user-friendly:

The second one is sleeker and with less features, but yet interesting (omf install neolambda):

Apart from the prompt, many plugins allow to enhance the user journey, in particular:

If you, like me, are a developer or a devops engineer, visualizing logs is thus a recurring task of your job and it becomes mandatory to have the good tools to be productive.

Modern IDE are not suited for logs viewing because they're already overloaded by your source files, and moreover, their huge weight may have a significant impact on your editor's performance. That's what happened for me in Atom as soon as the file's weight exceeded 10Mb.

The solution: use your terminal to tail the logs, while benefiting from available tools to autoformat them, to enable the syntax highlighting and to perform searches.

I use two different tools depending on the log type:

The benefit of jq is that on top of the JSON syntax highlighting, it automatically formats your logs to facilitate the reading. Thus, if you have one-liner compacted JSON logs for your ELK or any other data analysis stack, it will allow you to unpack your logs and to make them human readable.

jq is a much more powerful tool that would deserve its own article, as it is in fact a JSON parser with its own query description language, in the same way as xpath for XML, but with the simplicity of JSON.

Thus, by tailing each of your log files with tail -f in a dedicated term, and by piping stdout to jq or ccze depending on the type, you'll have a quick access to the information you need, formatted in an elegant way.

For each of the commands/tools quoted above, I put in brackets the command to install it. When there isn't, you'll find it in your package manager or easily on Internet.

Most of these commands require a third-party package manager like pip (python), npm (Node.js), gem (Ruby) or cargo (Rust).

Please feel free to share your own CLI by commenting this article!

How to create tmux session with a script

How to Visualize Tabs in Vim