I'm 24 now, which I know is still young to most, but there are still have been large amounts of time that I feel I wasn't productive. More important and perhaps frightening is that I feel like these chunks of time weren't meaningful, and easy to forget, which I try my best to actively avoid from now on.

Of course, I also realize how much time I still have. And I don't mind the act of shaking the dust to continue regardless with just as much fervour and enthusiasm, and crucially, naivety as a beginner. A Chinese proverb I often come back to is this:

“The best time to plant a tree was 20 years ago. The second best time is now.”

I was born in the age when computers were transitioning from business utilities to at-home-use. A side-effect of this, thanks to marketing, was their transition from "esoteric machines that only weird, hyperintellignent people can decipher" to "a magic box that was going to change the face of society and make you cool in the process".

I've had a vivid interest in technology for as long as I can remember, imploring and begging my parents for any sort of video games while still in nursery school.

Never a fan of traditional games, though, I was drawn towards "sandbox" tools that were able to create and even invoke meaning from the user. Although this is a rather mainstream concept now, the hardware limitations of fifteen years ago made it a rather fringe concept.

A good example of this is how obsessed I was with the GDCe demo of Will Wright's next project, Spore, which is still a fascinating watch today. To see such ambitious ideas be shown when I was only ten really changed how I viewed the world in general.

But mere fascination towards technology does not a software engineer make. To put pencil to paper, perhaps embarrassingly, was Tumblr. A large part of my initial exposure to programming. I was too young to create my first website with infamous services such as Geocities or AngelFire.

I even wrote about my experiences creating a custom theme from scratch for the first time here, although the code repository within the article has sadly vanished. As I had a tendency often to bury my tracks diligently when I was younger--mostly out of a fear of having something that I would have to keep on par with.

My introduction to GNU/Linux was totally accidental. I had bought a second-hand desktop tower off of Kijiji (think Craigslist, but less weird and more Canadian) when I was in high school, seven or eight years ago. It was a painfully slow Pentium processor, but learning to use such a device as your daily driver builds character, I say. However, somewhere along the way, Windows started to refuse to boot.

Such a problem can lead one who is stubborn enough, such as myself, to accidentally become rather knowledgeable in specific causes of both hardware and software issues. Such frustration taught me how to use USB drives as a means of installing operating systems, as well as using the command prompt to try to utilize specific recovery tools.

However, at the end of the day, nothing seemed to work. No matter what version of Windows I tried to install, I would always get a BSOD upon booting. I was getting desperate for this heavy piece of junk to work.

Now, I had heard of Linux before, specifically in the "Linux for Dummies" book, that I checked out from the library a few years prior to this. Although the technicalities went over my head, the ideals of free and open-sourced software stuck with me.

To be able to browse the internet, work on my school homework, and watch funny videos in programs created and maintained for free was rather mind-boggling. I even tried installing a copy of Linux onto my computer from the book, it had several different flavors, Ubuntu Lucid Lynx, RedHat, Fedora. I didn't really have a clue as to which one I should be choosing to use, though.

Fast forward back to high school, and now I have the smarts to research which distribution I want to replace my failing Windows HDD with. Ubuntu had gained a lot of popularity, but the recent switch to the Unity DE was far too much for this struggling PC.

I needed something more lightweight, and most likely niche. After a lot of searching on DistroWatch and obscure website, I came across CrunchBang! Linux.

But not only was CrunchBang lightweight, it was also very pleasing to look at, which is a difficult combination to master. This distro really pulled me into being aware of UX/UI design, as well as get into the technical weeds of TK tint2, Openbox DE, and GTK icons and themes. Below are a few screenshots of such creative endeavours: 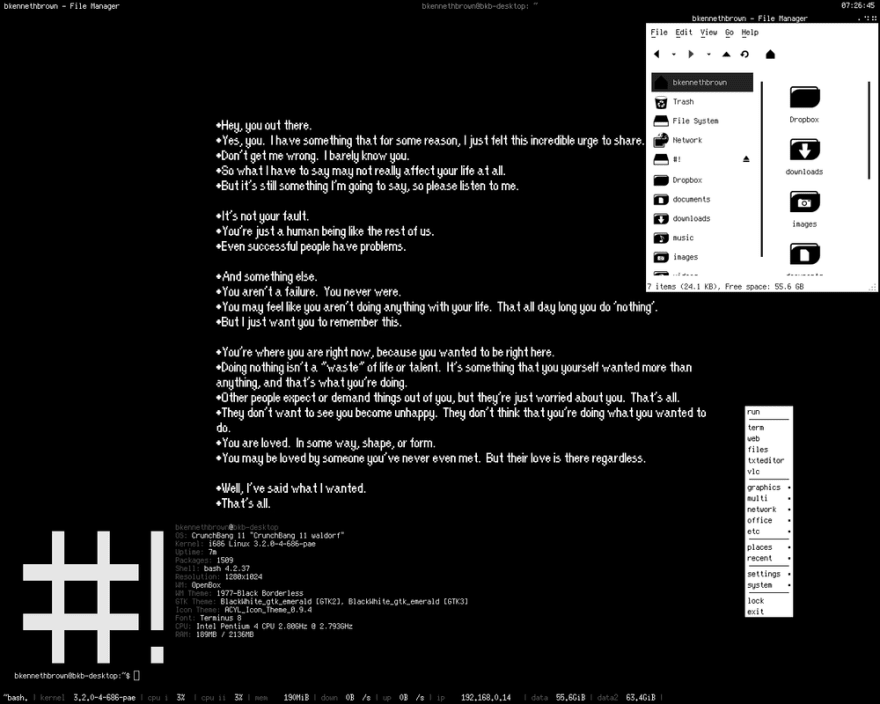 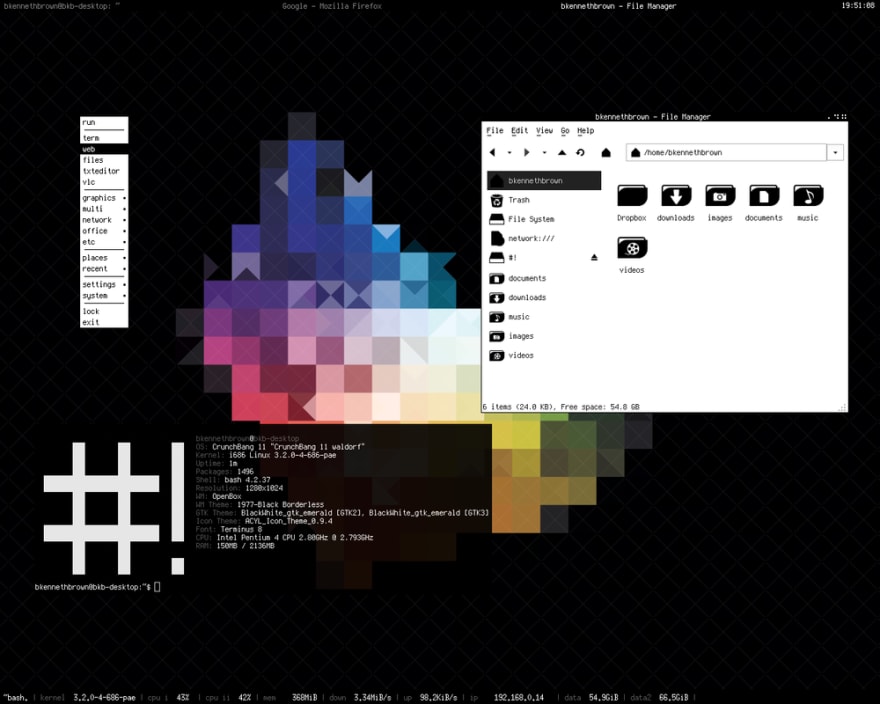 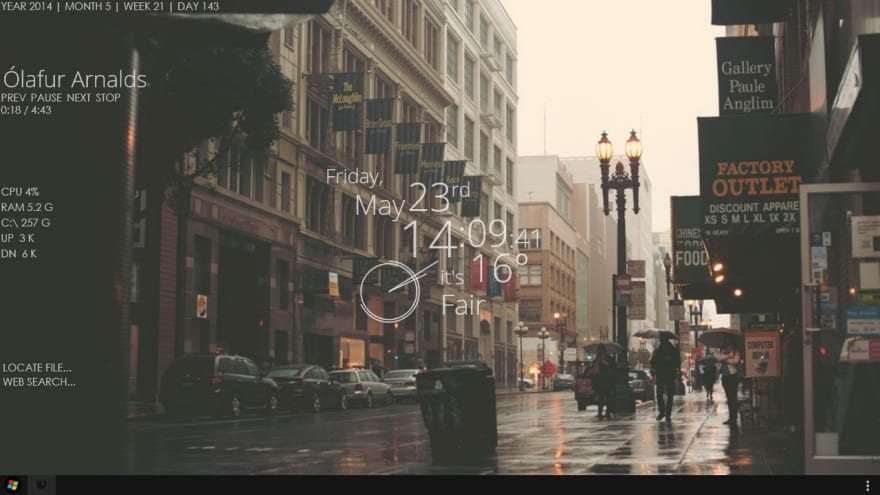 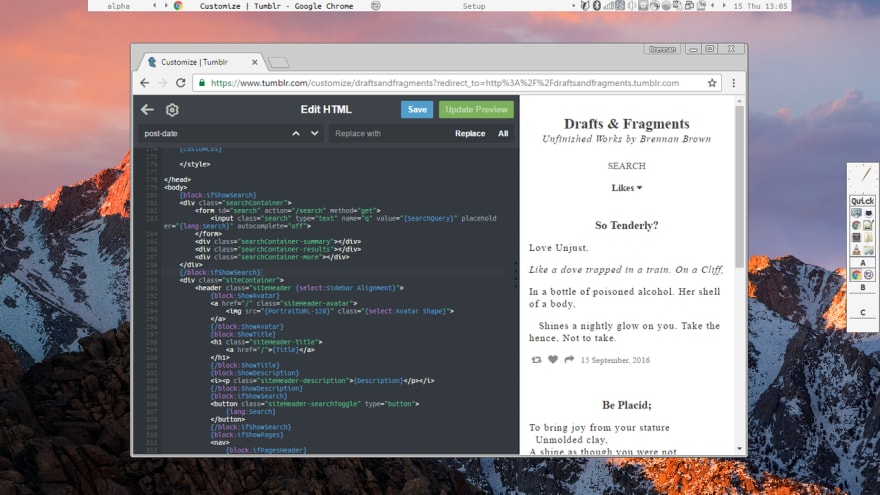 Of course, there's a lot more that happened after this, but that's enough self-indulgence for now. ;) Maybe if there's enough interest, I'll write a part two!

Once suspended, brennan will not be able to comment or publish posts until their suspension is removed.

Once unsuspended, brennan will be able to comment and publish posts again.

Once unpublished, all posts by brennan will become hidden and only accessible to themselves.

If brennan is not suspended, they can still re-publish their posts from their dashboard.

Once unpublished, this post will become invisible to the public and only accessible to Brennan K. Brown.

Thanks for keeping DEV Community safe. Here is what you can do to flag brennan:

Unflagging brennan will restore default visibility to their posts.