Let's make our react-native app work in the browser, the right way.

This tutorial was made for react-native <= 0.61. If you are using a newer version, I recommend that you fork this repository instead: brunolemos/react-native-web-monorepo, I am keeping it updated 🙌

Why am I writing this?

Hi 👋 I'm Bruno Lemos. I recently launched a project called DevHub - TweetDeck for GitHub and one of the things that caught people's attention was the fact that it is an app made by a single developer and available on 6 platforms: Web (react-native-web), iOS (react native), Android (react native), macOS, Windows and Linux (electron, for now), with almost 100% code sharing between them. It even shares some code with the server! This is something that would require a team of 3+ until a couple years ago.

Since then, I've received dozens of tweets and private messages asking how to achieve the same and in this tutorial I'll walk you through it.

If you are not familiar with react-native-web, it's a lib by Necolas (ex Twitter engineer) to make your React Native code render in the browser. Roughly speaking, you will write <View /> and it will render <div />, making sure all styles render the exact same thing. It does more than that, but let's keep it simple.

The new Twitter was created using this technology and it's awesome.

If you already know react-native, you don't need to learn any new syntax. It's the same API.

Note: It's much easier to create a cross platform app from scratch than trying to port an existing mobile-only (or even harder: web-only) project, since they may be using lot's of platform specific dependencies.

EDIT: If you use expo, it seems they will soon have built in support for web!

Turning our folder structure into a monorepo

Monorepo means having multiple packages in a single repository so you can easily share code between them.  It's a bit less trivial than it sounds because both react-native and create-react-app require some work to support monorepo projects. But hey, at least it's possible!

We'll use a feature called Yarn Workspaces for that.
Requirements: Node.js, Yarn and React Native.

Making react-native work in a monorepo

You can now run the iOS app! 💙 Choose one iPhone emulator and press the "Run" triangle button inside Xcode.

If you get the Cannot get property 'packageName' on null object error, try disabling auto linking

You can now run the Android app! 💙 Press the "Run" green triangle button inside Android Studio and choose the emulator or device. 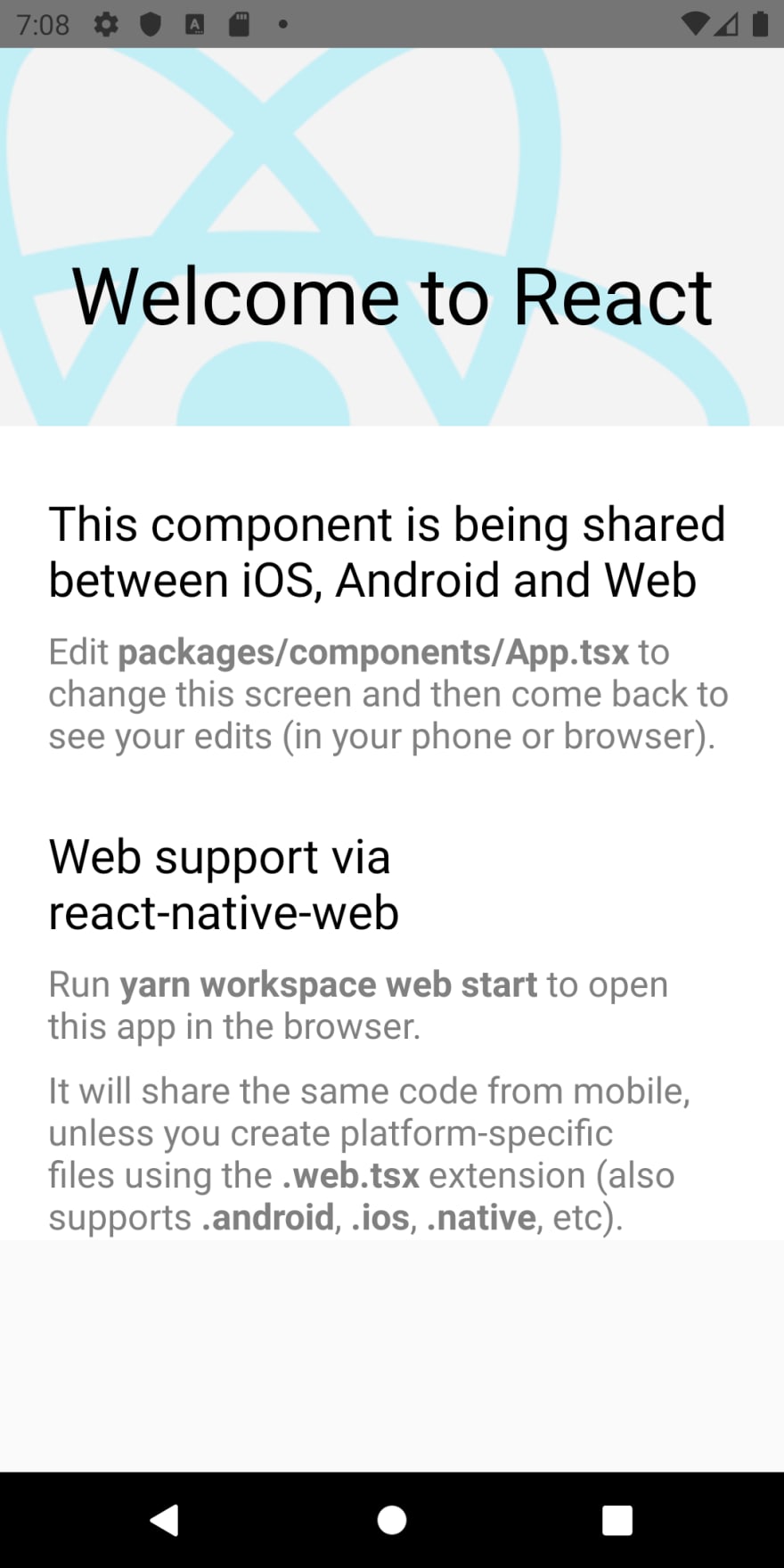 Sharing code between our monorepo packages

We've created lots of folders in our monorepo, but only used mobile so far. Let's prepare our codebase for code sharing and then move some files to the components package, so it can be reused by mobile, web and any other platform we decide to support in the future (e.g.: desktop, server, etc.).

Yay! You can now refresh the running iOS/Android apps and see our screen that's coming from our shared components package. 🎉

Note: You can reuse up to 100% of the code, but that doesn't mean you should. It's recommended to have some differences between platforms to make them feel more natural to the user. To do that, you can create platform-specific files ending with .web.js, .ios.js, .android.js or .native.js. See example.

Note: when we import from react-native inside a create-react-app project, its webpack config automatically alias it to react-native-web for us.

Making CRA work inside our monorepo with code sharing

CRA doesn't build files outside the src folder by default. We need to make it do it, so it can understand the code from our monorepo packages, which contains JSX and other non-pure-JS code.

That's it! You can now run yarn start inside packages/web (or yarn workspace web start at the root directory) to start the web project, sharing code with our react-native mobile project! 🎉 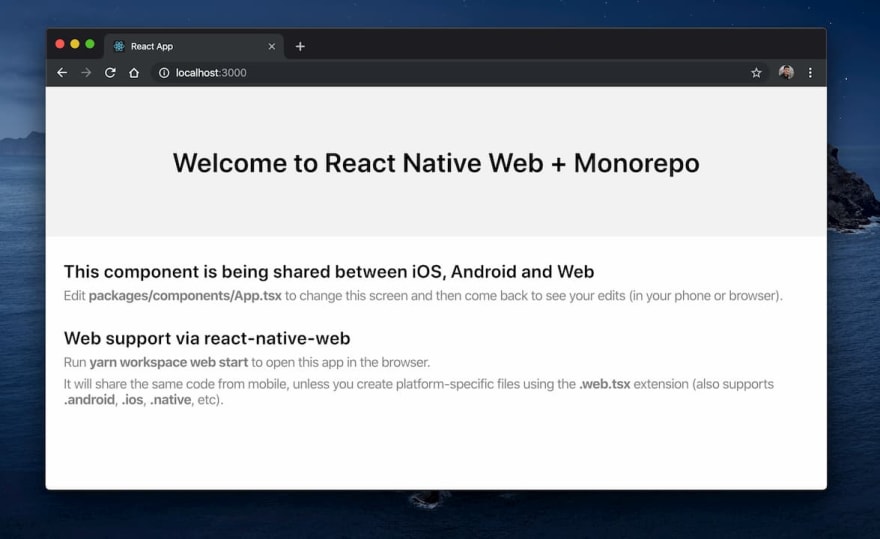