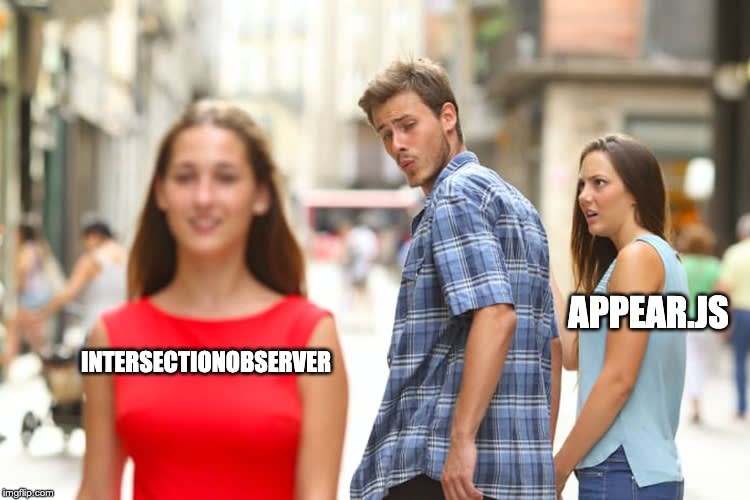 Dear appear.js, I have met someone new. It was more or less a good time with you. But I want to break up and you have to leave your stack.

The new one? Her name's IntersectionObserver. She is nice to me. She is smart, pretty syntax and very fast in doing things. I think I will have a good time with her.

Enough with joking.
At blue-tomato.com, we used some jQuery based image lazy loading library and appear.js for lazyloading things and doing effect based on elements in the viewpoint.

Both libraries listen on the scroll event and looking if the actual scroll position is in the range of the given elements position.

This technic was the default for long time, but since IntersectionObserver comes up, it was clear to switch sometimes to this. The main problem with the old method was the listing on the scroll-event was very expensive to browser performance.

With InteractionObserver this would work in this way:

Whats that rootMargin and thresold?

Appear.js has only some "bounds" option to let it fire some pixels before the element is really in the viewport. IntersectionObserver has a really powerful and flexible method to control this via the root/rootMargin and thresold options. Have an eye on this article from Smashing Magazine where Denys Mishonnuc explains this very detailed: https://www.smashingmagazine.com/2018/01/deferring-lazy-loading-intersection-observer-api/#intersectionobserver-initialization

Once suspended, btdev will not be able to comment or publish posts until their suspension is removed.

Once unsuspended, btdev will be able to comment and publish posts again.

Once unpublished, all posts by btdev will become hidden and only accessible to themselves.

If btdev is not suspended, they can still re-publish their posts from their dashboard.

Once unpublished, this post will become invisible to the public and only accessible to Markus Tiefenbacher.

Thanks for keeping DEV Community safe. Here is what you can do to flag btdev:

Unflagging btdev will restore default visibility to their posts.