It's been quite a while since I blogged about computing (I usually blog about baking) but here goes.

Lately I've been climbing a steep learning curve, trying to get my head around Google Apps Script (GAS). Now a few spreadsheets later, I'm on a trajectory that should see me crash-land on Planet Add-On in about a month.

REPL (read-evaluate-print-loop) has been a big thing for a long time with all manner of programming languages. So why not GAS? (Okay, it's more REP than REPL as the looping doesn't happen, but it's close.)

In my Code.gs I have the following (among other things)

This adds a custom menu to the menubar and populates it with one entry, namely 'REPL' which, when selected, runs a function called 'REPL'.

Also in there, for demonstration purposes, is a function that totals the ASCII values of the characters in the parameter string.

entering something to be evaluated and getting a response. 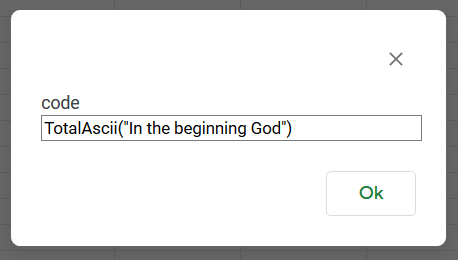 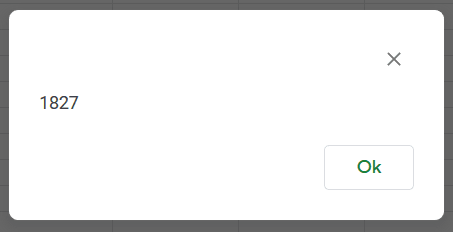 I'd like at some stage to put together an HTML form with a TEXTAREA. Maybe after I crawl out of the crater.

Bruce Axtens
Programmed Canon Canola calculators in 1977. Assorted platforms and languages ever since. Assisting with HOPL.info. I am NOT looking for work -- I've got more than enough to do.
Google Sheets setValues anomaly?
#javascript #googleappsscript #googlesheets
As soon as I put in a "data-client-token", the PayPal button refuses draw. Any idea why?
#paypal #javascript
Extracting example SQL statements from a log
#deno #javascript #sql

Once suspended, bugmagnet will not be able to comment or publish posts until their suspension is removed.

Once unsuspended, bugmagnet will be able to comment and publish posts again.

Once unpublished, all posts by bugmagnet will become hidden and only accessible to themselves.

If bugmagnet is not suspended, they can still re-publish their posts from their dashboard.

Once unpublished, this post will become invisible to the public and only accessible to Bruce Axtens.

Thanks for keeping DEV Community 👩‍💻👨‍💻 safe. Here is what you can do to flag bugmagnet:

Unflagging bugmagnet will restore default visibility to their posts.