This chapter of the Avalonia series will focus on adding some space to the UI. But before we can proceed, we have to make to some small changes.

The release of .Net 5 was a big step forward for the framework, so we are going to update the project to work with it.

To update the Avalonia project to .Net 5 is necessary to edit the file MyApp.csproj

Then you can manually update the version for the Avalonia Nuget packages accordingly to the latest available, which is 0.9.12 at the moment of writing this post.

Alternatively, you can automatically get the latest version by using the dotnet CLI. By running the following commands:

No matter which way was used to update the packages, in the end you need to run dotnet restore to get the new packages.

After running dotnet run, the application will be updated and running as usual.

The current application works, but it has some minor issues. The default window size is quite big in comparison to the other elements, there is a lot of unused space and the controls are too close to each other. So we are going to fix it. 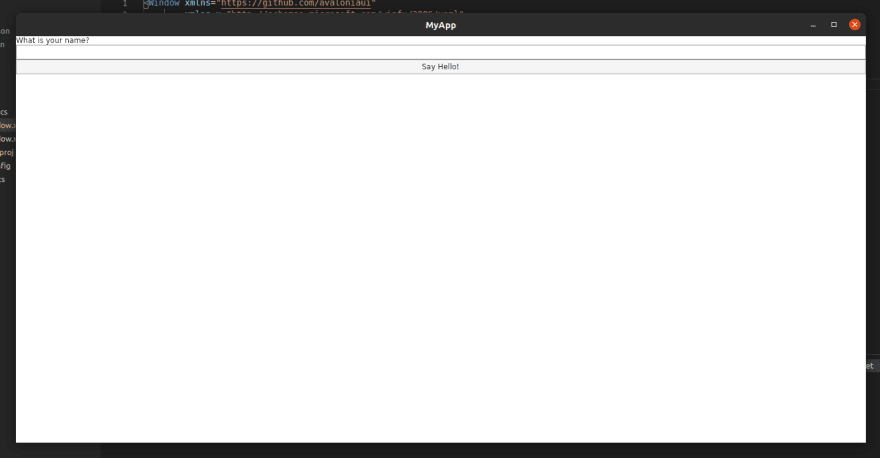 If you open MainWindow.xaml the first instinctive change would modify the following attributes, but sadly those are only used by the Visual Studio designer that is why they have a d: prefix

The correct way to change the window size is by adding the attributes Width and Height with a numeric value that represent its "pixel" size. 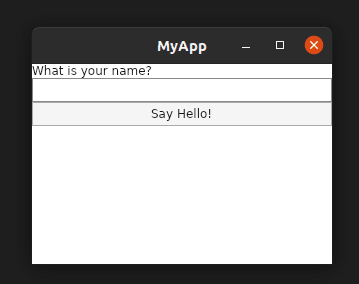 As you can see the new window size suits its purpose better. Next we are going to add some space between the controls.

If your have used CSS you might be familiar with the concepts of Margin and Padding, which are basically space you can add outside the boundaries of the control (margins) or inside its boundaries (padding)

The Avalonia team has created a great explanation of them in the following docs entry Avalonia Docs: Alignment, Margins and Padding

This properties Margin or Padding need to be added to a Window, Container or Control. The syntax from the following example is also applicable to Margin too.

Be aware that not all the controls can have a Padding/Margin property.

If you run the application, you will have the following result. 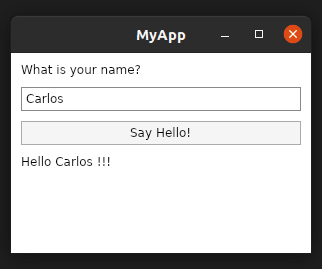 As you can see now there is some spacing that can be improve legibility and usability.

The code for this chapter will be located in the repo Avalonia UI in Ubuntu Tutorial with the tag 03-end.

I hope you find this post useful, in the following chapter we are going to explore how to style controls.

Installation of Perl on Linux/Unix 2022

Once suspended, carlos487 will not be able to comment or publish posts until their suspension is removed.

Once unsuspended, carlos487 will be able to comment and publish posts again.

Once unpublished, all posts by carlos487 will become hidden and only accessible to themselves.

If carlos487 is not suspended, they can still re-publish their posts from their dashboard.

Once unpublished, this post will become invisible to the public and only accessible to Carlos Fabara.

Thanks for keeping DEV Community safe. Here is what you can do to flag carlos487:

Unflagging carlos487 will restore default visibility to their posts.