In this article we are going to learn about Arrays. 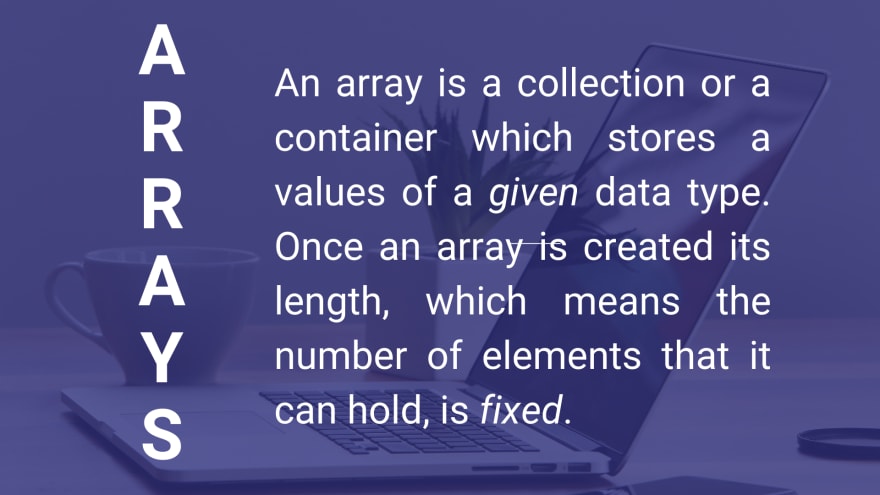 Given above are few examples of arrays. Let's see how we can implement them in java.
First you need to know that we have to import a library named java.util.Arrays to perform array oppertaions. Without that you can not use Arrays in your program. After importing that library we can declare array variables as follows;

Tryout these print statements with the given array and see the outputs. Reason why they give those outputs.

I will reason the last print statement. You might have thought that System.out.println(primeNumbers) would print the elements of the arrays. However, your output would looks something like this '[I@1b6d3586'. What is this output? Any guesses?

Here, by default java returns a string which is calculated based on the address of the object 'primeNumbers' in the memory, when you called the System.out.println(primeNumbers) statement. Is there a way in which we can print the elements of the array? Yes, for that you have to use the predefined methods in the Arrays class.

The toString() method will converts the array to a string and will give the output '[2, 3, 5, 0, 0]' as the result. Why do the last two elements are zeros? That is because we have not yet stores any values in 3rd and 4th indexes. How can you get the number of elements of a particular array?

Above code gives the length of the array. Here it prints '5'. In other words it prints the size that we have allocated when we first initialized the array. It includes the last two zeros as well.

There's another way to initialize arrays.

The above code will create an array named numbers with size '3' and stores elements 2, 3, and 5 in it.

Just like in strings, Class Arrays also has many predefined methods. I will leave them for you to explore and practice ;)

Arrays may not always be one dimensional. You also may want to declare two dimensional arrays (like matrices). Let's see how we can do that.

The matrix can be displayed as follows in a tabular form.

Just like one dimensional arrays, 2D arrays can also be declared as follows.

With that we can wrap up this article. Let's learn more about java in upcoming articles :)

Thanks for keeping DEV Community safe. Here is what you can do to flag chathurashmini: