Thats just one instance of your application in one Docker host.

What happens if the number of users increase and the instance is no longer to able to handle the load?

You perform the multiple instance run of your application as:

You have to have a close watch at the load and performance of your application and deploy the instances yourself.Also if a container health is bad in some case then you have to find and replace it manually.

What about the health of host itself? What if the host crashes and is inaccessible?

The container hosted in the host are inaccessible too.

What will you do in such case where there are hundreds and thousands of instances as well as containers and your need to monitor state and health of them?

It is a tool and scripts collection where we can solve the scalable problem in terms of health of the containers and also the states.Usually they contain multiple Docker hosts that hosts containers.If one fails then the application is still accessible to others.

These Orchestration service helps not only in scaling our applications along different hosts but also in scaling the hosts as per the requirement.We can even setup network in between hosts and communicate the resources and activities in between. With features like load balancing such Orchestration engine has made our workflow really easier with other features like sharing storage and configuring management and security within the cluster.

There are multiple Container Orchestration solutions available in the market. Some of them are:
1.Kubernetes
2.MESOS
3.Docker Swarm

Here we will be focusing on the Kubernetes.

So what could be the solution of our replica problem which was not suitable with Docker.

With simple one command we can make replicas of our application by thousands of unit.

We can even make it auto scale with scale command for 3000 units.

Kubernetes also allows us to make sure we upgrade or downgrade as per the requirement through AB testing methods.Also there are hundreds of vendors for storage and network applications due to its open architecture.Kubernetes uses Docker host to host applications in the form of Docker containers.

Now lets take a look at the Kubernetes architecture. 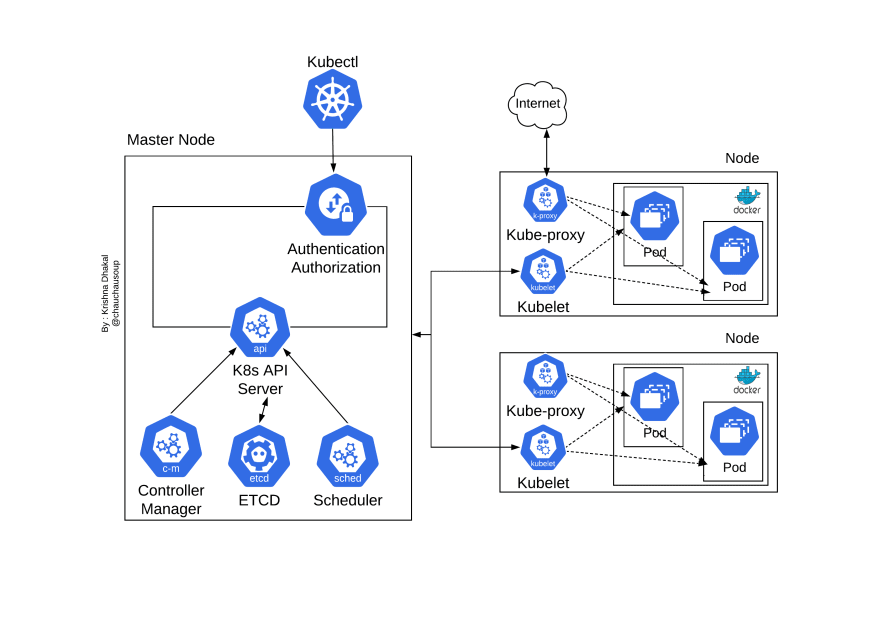 Node is a worker machine where the containers are launched by the Kubernetes engine.

Cluster is the set of Nodes grouped together.This was even if one node fails you have your application still accessible from the other nodes.We do have the cluster with these containers but how can we manage these nodes on the cluster ?

Master Node comes into play now.Master is the node with Control Plane which helps in controlling the containers in the working node of the cluster.

On installing Kubernetes in a system you are installing the following Components.

API server acts as a Frontend for the Kube Cluster.It helps in communicating the Kubernetes cluster with the users via command line,UI etc

Etcd is a Distributed reliable key-value store used by Kubernetes to store all the data that is used to manage the Kube Cluster.It prevents multiple masters from controlling the respective nodes.

Scheduler is responsible for Distributing work for containers across multiple nodes.It looks for newly created containers and assigns them to the nodes.

Controller Managers are like the brain of Orchestration as they report whenever the endpoint,container,node etc goes down.Controller makes decision to bring up new containers in such cases.

Container Runtime(engine like Docker) a underlying software that is used to run containers. In our case which happens to be Docker.

Kubelet is the agent that runs in the each node in the cluster.This agents work is to make sure that the containers are running as expected in the given nodes.

Kube Proxy runs on each node which can proxy UDP, TCP and SCTP.It does not understand HTTP.It helps in providing load balancing.

Finally Kubectl is the command line utility for Kubernetes Orchestration environment via which a user operates the Kubernetes.

How to Deploy WordPress to Amazon EKS using Helm

Once suspended, chauchausoup will not be able to comment or publish posts until their suspension is removed.

Once unsuspended, chauchausoup will be able to comment and publish posts again.

Once unpublished, all posts by chauchausoup will become hidden and only accessible to themselves.

If chauchausoup is not suspended, they can still re-publish their posts from their dashboard.

Once unpublished, this post will become invisible to the public and only accessible to Krishna Dhakal.

Thanks for keeping DEV Community 👩‍💻👨‍💻 safe. Here is what you can do to flag chauchausoup:

Unflagging chauchausoup will restore default visibility to their posts.