We all have been there: we spent so much time into a project, we make sure to run each and every possible scenario we might think off in order to make it as good as possible. But when you let someone else try it out they find small edge cases that can make your app behave in unexpected ways.

In order to prevent that from happening too often, we use different types of testing techniques: Unit Testing, Integration Testing and End-To-End Testing. Although the later (End-To-End Testing) can be made by either developers or Quality Assurance team members.

This is also known as the Testing Pyramid 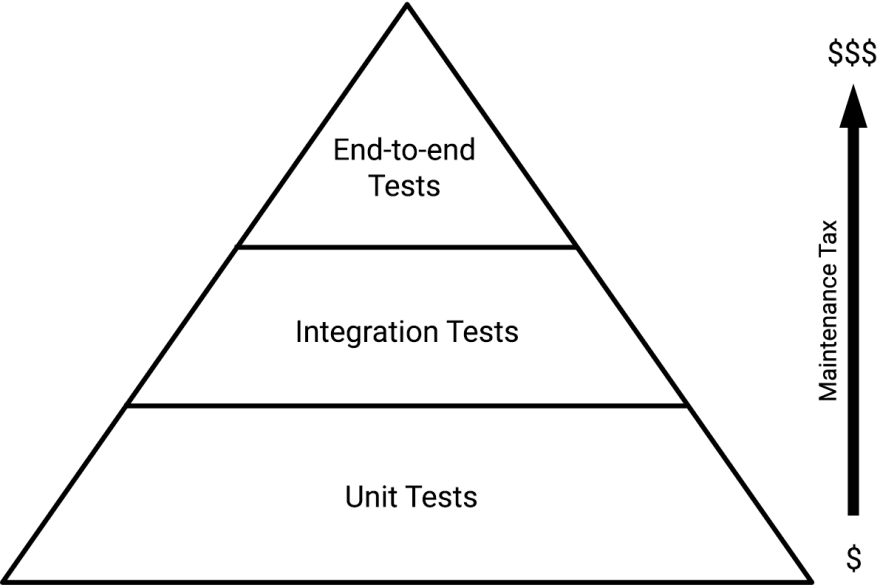 Try not to be distracted about the other two types of test mentioned before, but rather focus on the idea that we can expect our unit test to be far more in quantity than the others, but keep in mind that they don't replace each other. They are all important.

The very first thing we need to do is to add the TestNG framework to our project. This will provide us with a set of classes and annotations which will come in handy later.

Add TestNG to your project

This can be done 2 ways: manually or using Maven in your project. Feel free to skip the other depending on how you setup your project.

You can follow this guide in order to add it manually.

In case you haven't done it, make sure to select the Enable auto-import option that should appear on the bottom right of your screen. This will allow IntelliJ IDEA to automatically detect any changes made to your pom.xml and refresh it accordingly. Life saver :)

For the sake of this post, we will not be applying TDD (Test Driven-Development) techniques, our focus will be on getting to know how to write test classes and methods.

So, in order for us to start, we will need to create a class inside our src/test/java/ directory, and name it MathTests.

The use of the suffix "Tests" at the end of a testing class name is a common naming convention that will allow other developers and yourself to quickly know, without opening the file, that it has testing logic inside of it.

Can you spot any difference from a regular class and this one?

What makes a class a "testing class" is not it's signature, but actually it's methods and it's important for these classes to be inside a directory marked as a Test Source Root.

These methods should follow a particular naming convention, should have the public access modifier, should have void as their return type and the @Test annotation before their signature.

The @Test annotation indicates our IDE's test runner that this is not a regular method and will execute it accordingly.

So, our first test method would look like this:

There's another convention that is really common among other programming langauges, known as the Tripple A:

In practice, this would be:

The final keyword is used to prevent our value to be changed later, also known as a constant.

Here we can see how the whole arrange, act and assert come together.

If you take a look at the line numbers on the left of the add_TwoPlusTwo_ReturnsFour() method, there's a green play button, select it and then choose the first option from the context menu.

Wait a few moments and... the test runner panel should open up with the test results.

If you see that everything is green, it means that our test passed!

But, as a good tester, we should also try to make our test fail.

Let's change the act part so it adds 3 and 2 together, so our actual value becomes 5 and our test should fail.

Now, some of you may be wondering why we use the assertEquals() method from the Assert class, we could manually try to use an if-else block that can simulate the same results, but the Assert class provides a handy set of methods to do various types of validations.

The most common ones are:

If we were to implement our own logic using if-else, not only it would clutter our code, but also could lead to unwanted results. Since, if we forget to throw and exception in one of our if-else blocks, both of our code paths will be marked as PASSED.

Tip: most of the time we should only use 1 single Assert method per test, although there are exceptions to this rule. But this is normally recommended in order for our test to be really small and straight to the point. Each test should only verify 1 code path at a time. Also, if we had 3 assertions and the first one fails, the following ones will never be executed, so keep that in mind.

Now that we got that out of the way, let's continue with more tests!

How about you practice testing more scenarios for the add() method?

If we take another look at our Math class, we can see there are 2 more methods.

I'll let you do the tests for the multiply() (hint: make sure to test when we multiply a number by zero) method and I'll focus on the divide() one for the rest of this article.

Let's take a closer look to this method:

As you can see, if the value of the divisor argument is 0, we will throw an IllegalArgumentException, otherwise, the division operation will be performed.

Note: the throw keyword not only throws a given exception, but also stops the code execution, so it works similar to the break keyword inside a loop or a switch block.

So, this method has 2 possible outcomes or "code paths". We need to make sure to test them.

The amount of tests per method, should be equal or more than the amount of code paths it has.

Which means, that we should at least have 2 tests.

Let's go ahead and make them!

And our second test would be:

Mr./Mrs Reader: "B-bu-but what happened with the arrange, act and the assert? what is the expectedExceptions part doing?"

Do not worry, I shall explain shortly!

Tip: remember to use the .class at the end of the exception name, otherwise, this code would not compile.

You have noticed that so far we have been testing static methods of our Math class, which means we don't have to create objects of it. Which is fine.

But what if we had a class that didn't have static methods?

For this, our testing framework (TestNG) provides a pair of annotations to make sure that each of our test use a fresh instance of our class.

Let's imagine we could create instances of the Math class.

In that case, our tests would look like this:

Which isn't that bad, but remember that we can make many more tests for this same class and having this Math objects initialized over and over will create more code noise.

If we have to ignore certain parts of our test, specially in the arrangement, it means we can use one of our testing framework's tools:

These two annotations can be added to our test functions like we have been using the @Test one, but they work in a particular way.

So, why would we use them?

In all of our @Test methods we would have to constantly initiate a new Math object, so with the help of the @BeforeMethod annotation we can get rid of this repetitive code.

First thing we need to do is to promote our Math object to a member variable or property.

Then add our @BeforeMethod function, which is commonly named as "setUp".

Now, in order to make sure we clear out our math object, we can set it's value to null inside our @AfterMethod function, which is usually called tearDown():

This means that the order of execution of our test would be:

With this you should be more familiar now with how Unit Testing works.

Although we didn't do any tests that required us using the assertTrue() and assertFalse(), I encourage you to do your own tests to play around with them for a little bit :)

Feel free to leave a comment if you have any questions and I'll do my best to clear them out!

If you would like to take a look at the entire project, head over to this repository on GitHub.

How to star a coding YouTube Channel. Step by Step

Once suspended, chrisvasqm will not be able to comment or publish posts until their suspension is removed.

Once unsuspended, chrisvasqm will be able to comment and publish posts again.

Once unpublished, all posts by chrisvasqm will become hidden and only accessible to themselves.

If chrisvasqm is not suspended, they can still re-publish their posts from their dashboard.

Once unpublished, this post will become invisible to the public and only accessible to Christian Vasquez.

Thanks for keeping DEV Community 👩‍💻👨‍💻 safe. Here is what you can do to flag chrisvasqm:

Unflagging chrisvasqm will restore default visibility to their posts.