Google has been hosting the Chrome Dev Summit (CDS) conference around November every year since 2013. It's a place to engage with Chrome engineers and web folks—check out the recordings here.

And every conference needs its own website. In CDS' case, it's a static site containing some information and schedule data. Reservations were handled by another system (and liberal application of Google Forms). In 2018, we built on previous work and rewrote the site, with these requirements:

The CDS site runs on a simple Node.JS server, rendering plain HTML for pages and their subpages. Every bit of content, whether it be a FAQ or information about a speaker, is something a browser can load with a real URL. We're not using any specific framework—we just wanted plain HTML.

We decided early on that we wanted to support a no-JavaScript experience. This was important to us to include the long tail of browsers, including low-end devices like those running KaiOS (which, under the hood, runs Firefox 48)—see the high-quality 'screenshot' below! 😮📸 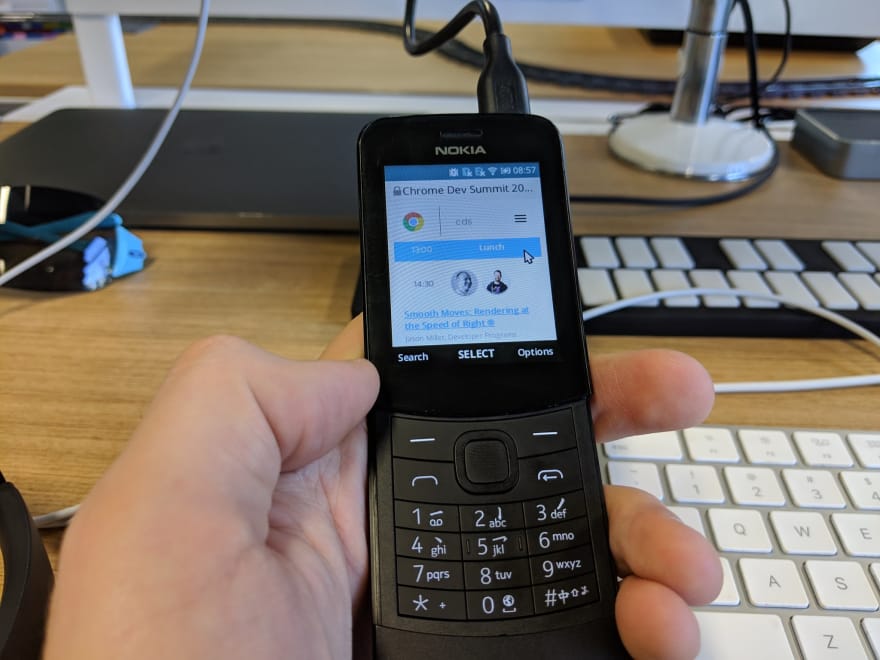 We still want JS, of course: while the site is primarily for serving information, there's a couple of places where it's nice to have.

Our JS is shipped using <script type="module" src="code.js">. Using the "module" type is important, as it will only target browsers that support ES6 modules: modern browsers from about early 2018 onwards.

This is a very intentional choice:

So, if you load up the CDS site now (I enjoy this empty page) and click a link, you'll see that changing between pages gives a transition effect in-line with the conference theme. Without JavaScript, the link is just that: it'll load entirely new HTML.

a. Kick off loading the new page via window.fetch, holding the Promise

b. Fade out the current page with a CSS transition, and desaturate the masthead image (filter: grayscale(1))

c. await the fetch Promise, then extract the content from the <main> tag of the whole other page—we're not requesting partials here, so there's a tiny overhead in re-requesting the <head> etc

This works literally by inserting the full HTML of the other page into a dummy element:

d. Call history.pushState with the new URL, and fade in the new content with CSS

And if any of the process above fails, we fall back to setting the browser's location to the new URL via (effectively) a giant try/catch block. This is just one example, but all of our JS works progressively using this same approach—only shipped with type="module", and always wrapped in safety blocks.

Our JavaScript lives in several files with a single entrypoint (as all pages in the site are effectively the same, wiki-style content). As mentioned, we use ES modules, and the entrypoint is at src/bundle.js—in development, this goes on to statically include further files (including some from our node_modules folder), just so that our code has a good layout.

⚠️ We include ES modules from node_modules, but you can't just naïvely import older-style require()/module.exports code without an extra rollup plugin, and you will need a build step even for development.

To build, we simply use Rollup to concatenate all of our source into a single file. So that even though our code requires ES modules, we don't use importing or exporting in production. It's just a high water mark for features, and our client browsers then only have to fetch one single file to make the site 'go'.

Load one of our sessions in an incognito window (important!). You'll notice there's nothing 'behind' the session popup: this is just a session itself.

This page is actually an AMP, which works really well: it's a "leaf node", which AMP is designed for (think article, item in a store, session, speaker etc).

If you now reload this page, or navigate to it from the schedule itself, you'll see that the session appears as a popup. This is another enhancement, and there's a few parts to this:

In this way, our sessions can be displayed in an enhanced fashion, as part of the SPA with JavaScript. And if this flow isn't supported, we always have the fallback option: raw (AMP) HTML, something literally every search engine and browser understands.

We use Less CSS for our CSS. Rather than doing any ongoing build process, in development, we include the source and its runtime parser directly:

And in prod, we ship the compiled CSS file.

It's all well and good to ship a no-JS solution for older browsers, or for search engines, but there's some parts which are traditionally complex.

If you load CDS on a small device (e.g., a KaiOS device... or just shrink your window), you might notice one component that is quite interactive and required for navigation- the sidebar.

We can actually do this entirely without scripting. Fundamentally, we can leverage CSS' adjacency selector.

How does this work? The button to open the sidebar (known as the "hamburger menu", ☰) is actually a <label> pointing to a transparent (but not hidden) <input type="checkbox">. When checked, we can add a CSS rule bringing an adjacent element into view:

Here's a longer demo of how this works:

We actually do a bit more work to ensure that the sidebar is not just offscreen, but also properly removed from the DOM, when it's closed. Notably, we animate the visibility property so that it is set to visibility: hidden when the animation is gone.

What's the takeaway here? Every browser understands forms, so we can make them work for us. 👍

While most of CDS' content is statically generated (e.g., the FAQ or other pages), the session and speaker popups are is somewhat manually generated with raw calls to the DOM- think lists of querySelector('#foo').textContent = '...';.

We do this for two reasons.

I hope you've enjoyed this short writeup. What have I missed?

Thanks for reading! 🎉 If you have more questions, hit me up on Twitter.

From Doctor to Developer