I usually blog about .NET related topics on this blog. I got asked by a friend, why I did never blog about my mobile app, and how I earned 2000$+ with it. Well, I guess it’s true, I never talked about it, and I never wrote about it (except this article from 2015).

I have to admit that my mobile app is not a .NET app, but an Android app written in Java and published in the Google Play Store.

It’s finally time to reveal all the secrets that made me rich so you can become wealthy too – I’m kidding. This article gives insights into my experience programming, marketing, selling, and rewriting my first mobile app.

Let’s talk about money first. Yes, I made more than 2000$ in sales with a simple mobile app in the Google Play Store. Let’s dive deeper into what money went into my pocket.

Back in November 2010, I released my first (and only) mobile app to production. After the initial release, I made several updates and a complete rewrite in Spring 2017.

My currency is CHF, and all the data is provided in CHF. At the time of this writing, the USD is 1:1 to CHF, so it makes it easy for people to understand, and I do not need to convert those numbers. I use USD in this article.

It also means that between 2012 and today I only made about 700$. There are a few things I learned that I want to share with you:

But if you’re an independent developer without a team and you develop your app in the free time don’t expect to make that much money from it. I have to say that 1000$ per years seems pretty neat to me, and I did never expect to make more than a few dollars out of it.

The app I made

I made CarParking Schweiz, which is a directory for parking lots in Switzerland. If you open the app, you can see which parking lots are open and how much parking space is available. 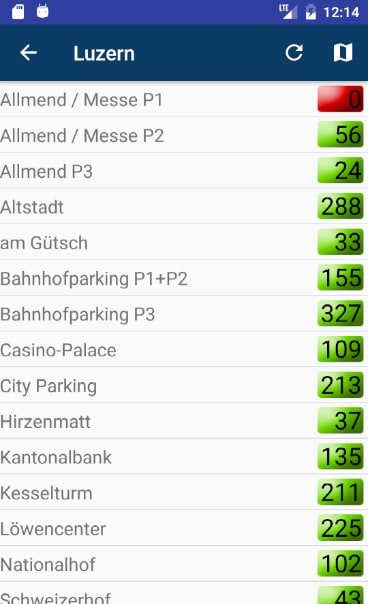 Besides the listing, I also included a map view that shows all the parking lots, and if you press on a parking lot, you can start navigation to it using Google Maps.

The app has a one-time price tag of 1.95$. I don’t like subscriptions myself and I think most consumers do neither. Therefore, I decided to go with a paid app with an upfront cost. 2$ is a small amount in my country and I might even be able to raise the price, which I never did.

How I got the idea

I wanted to create something for myself that helps me finding a parking lot when I visit different areas in Switzerland. In the cities, there is often traffic jam, and I was sick of searching for parking opportunities. I wanted to jump into my car and drive to the closest available parking lot to my destination.

How I developed the app

Back in the days Eclipse and the Android Developer Tools (ADT) were the way to go. I installed that software on my computer, and I was ready to go.

Everything I needed to know to build an app was the programming skills that I already had and the online documentation of the Android platform, and of course, an Android device to test the app. Back in the days, I used an HTC Desire, which was my first smartphone.

After a few years, I got back to the project and thought about modernizing the app. There were new Google Maps APIs I had to use. The old API was retiring, and there were other platform changes like the physical buttons that disappeared from the devices.

I got back to the code base and let me tell you; it was a pain to develop with Eclipse and ADT. The tools were bad in 2010, but they did not improve in 7 years. At least not to something I wanted to use. I was used to Visual Studio, which developed a lot and offered many more features.

It was time to try the new Android Studio. I installed Android Studio and decided that the app was that old that I would write it from zero. I opened up the IDE and started working. Except for a few resources, I completely rewrote the app to fit the current platform requirements.

When I completed the project and released version 2 of my app, I hoped that it would gain traction again and make a few sales. As it turned out and as I described above, it did not go according to plans.

Things I would consider for a new project

Going into a new project I would consider the following key learnings:

If I created a new mobile app today, I would try Xamarin. Microsoft acquired Xamarin in 2016. Xamarin development was very pricy before Microsoft bought it. After the acquisition, most of the resources such as the Xamarin University, became free for developers.

Also, one of the downsides of my Java code for the Android platform is that the app only runs on Android smartphones and tablets. It was always my goal to bring the app to the iPhone, but without a Mac, I could not compile the app, and I would have had to rewrite the code in another programming language.

Xamarin and Xamarin Forms offer a compelling platform to develop a single code base, cross-compile to either Android or iOS, both resulting in a native app for the respective platforms.

This article explains how and why I created my first (and only) mobile app back in 2010. It also reveals how much money I made from it and that it is possible to make money with a simple app.

If I come across another problem I want to solve; I would consider writing a new app again. It was a fun experience, and the few extra dollars helped me to pay my bills during my time at the university.

Although it is still possible to write Android apps in Java, as an experienced .NET developer with a heart for C# programming, I would try Xamarin and Xamarin Forms for my next mobile app.

Let me know in the comments if you also wrote an application, which technologies you used, and what your results were.

This article was originally published on claudiobernasconi.ch on May 22nd, 2019.

How does HashMap work in Java?

Once suspended, claudiobernasconi will not be able to comment or publish posts until their suspension is removed.

Once unsuspended, claudiobernasconi will be able to comment and publish posts again.

Once unpublished, all posts by claudiobernasconi will become hidden and only accessible to themselves.

If claudiobernasconi is not suspended, they can still re-publish their posts from their dashboard.

Once unpublished, this post will become invisible to the public and only accessible to Claudio Bernasconi.

Thanks for keeping DEV Community 👩‍💻👨‍💻 safe. Here is what you can do to flag claudiobernasconi:

Unflagging claudiobernasconi will restore default visibility to their posts.