Recently I completed work on a tool called nlphoseGUIBuilder that allows creation of complex NLP pipelines visually, without writing a single line of code ! It uses Blockly to enable creation of NLP pipelines using drag and drop.

The tool generates a nlphose command that can be executed in a docker container to run the pipeline. These pipelines can process streaming text like tweets or static data like files. They can be executed just like normal shell command using nlphose. Let me show you what I mean !

Below is pipeline that searches Twitter for tweets containing 'netflix' and performs named entity recognition on it. 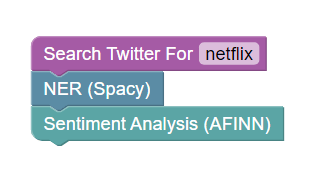 It generates a nlphose command which looks like this

When the above pipeline is run using nlphose, you can expect to see stream of JSON output similar to the one shown below:

Lets try out something more, the below pipeline searches for tweets containing the word 'rainfall' and then finds the location where it rained using 'extractive question answering'. It also filters out answers with lower scores.

Here is the nlphose command it generates:

It is also possible to create a pipeline that processes multiple files from a folder :

The above pipeline generates this command:

Play with the tool here: https://ashishware.com/static/nlphose.html

Here is the link to the projects git repository: https://github.com/code2k13/nlphoseGUI

Here is a YouTube link of the tool in action:

Don't forget to checkout the repository of the companion project nlphose: https://github.com/code2k13/nlphose

How To Hide And Show Div In jQuery

Once suspended, code2k13 will not be able to comment or publish posts until their suspension is removed.

Once unsuspended, code2k13 will be able to comment and publish posts again.

Once unpublished, all posts by code2k13 will become hidden and only accessible to themselves.

If code2k13 is not suspended, they can still re-publish their posts from their dashboard.

Once unpublished, this post will become invisible to the public and only accessible to code2k13.

Thanks for keeping DEV Community 👩‍💻👨‍💻 safe. Here is what you can do to flag code2k13:

Unflagging code2k13 will restore default visibility to their posts.