This week focus was on testing with Jasmine from Colt Steele The Advanced Web Developer Bootcamp.

Writing Tests in the Browser

Jasmine is a testing framework that works with all kinds of JavaScript environments.

beforeEach
runs before each "it" callback

afterEach
runs before each "it" callback - useful for teardown

It is possible to nest describe blocks.

Spies
Jasmine has test double functions called spies.
A spy can stub (mimic) any function and track calls to it and all arguments.
Spies only exist in the describe or it block in which it is defined.
Spies are removed after each spec.
There are special matchers for interacting with spies.

It is installed by invoking jasmine.clock().install()
Be sure to uninstall the clock after you are done to restore
the original functions. 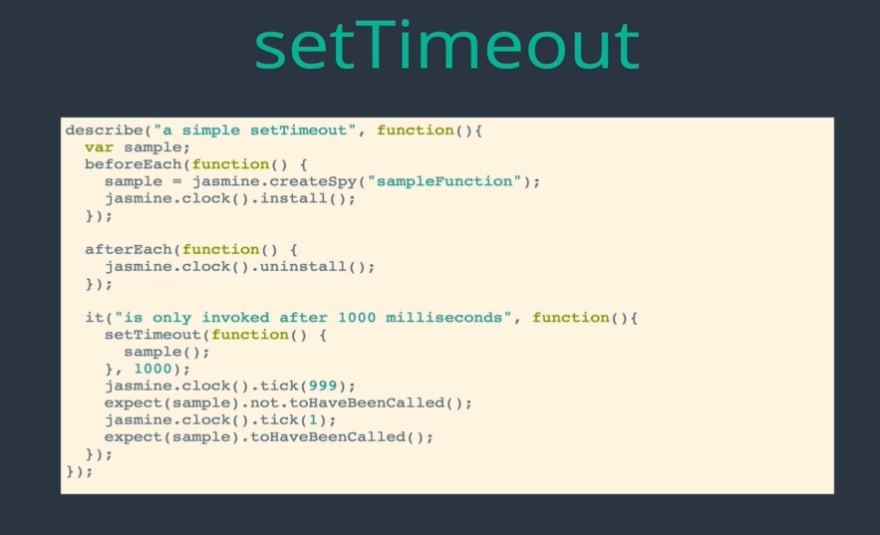 How to test async code

Jasmine also has support for running specs that require testing async code
beforeAll, afterAll, beforeEach,afterEach and it take an optional single argument(commonly called 'done') that should be called when the async work is complete.
A test will not complete until its 'done' is called.

Code_Regina
Hello everyone! My name is Regina and I love technology. I am using dev to document my learning experiences. My end goal is to contribute to open-source projects to advance the software community.
[.NET R & R] Project Overview and API Basics
#software #webdev
Graphs
#javascript #webdev
Hash Tables
#javascript #webdev

Once suspended, code_regina will not be able to comment or publish posts until their suspension is removed.

Once unsuspended, code_regina will be able to comment and publish posts again.

Once unpublished, all posts by code_regina will become hidden and only accessible to themselves.

If code_regina is not suspended, they can still re-publish their posts from their dashboard.

Once unpublished, this post will become invisible to the public and only accessible to Code_Regina.

Thanks for keeping DEV Community 👩‍💻👨‍💻 safe. Here is what you can do to flag code_regina:

Unflagging code_regina will restore default visibility to their posts.