If you have been following the Codefresh blog for a while, you might have noticed a common pattern in all the articles that talk about Kubernetes deployments. Almost all of them start with a Kubernetes cluster that is already there, and then the article explains how to deploy an application on top.

The reason for this simplification comes mainly from brevity and simplicity. We want to focus on the deployment part of the application and not its infrastructure just to make the article easier to follow. This is the obvious reason.

The hidden reason is that until recently infrastructure deployments were handled in a different manner than applications deployments. Especially in large enterprise companies, the skillset of people that deal with infrastructure and application can vary a lot as the tools of the trade are completely different.

For example, a lot of people that deal with infrastructure prefer to use Terraform templates, but employ Kustomize/Helm or other similar tools for application development. While this is a very valid solution, it doesn’t have to be this way.

Now with GitOps you can have a uniform way of dealing with infrastructure and applications.

If you are not familiar with GitOps, head over to https://opengitops.dev/ which is the official page of the GitOps working group. The principles of GitOps are the following:

If you have already worked with Terraform, you should already understand why it is difficult to apply GitOps to the Terraform CLI. While Terraform only has the first requirement (declarative format), it doesn’t satisfy the other three requirements around Git storage, automatic reconciliation, and two-way sync. As soon as Terraform finishes its job, it doesn’t interface with the system in any way. If you manually delete a Virtual Machine that was created by Terraform, vanilla Terraform doesn’t know about it. And regarding state, Terraform stores its own state which is completely different from the definition files in Git.

So at first glance, getting GitOps to work with infrastructure is a complicated task. You realize that you need to add something on top of vanilla Terraform in order to satisfy the GitOps requirements.

But there is a new kid on the block, and that is Crossplane!

Crossplane has similar capabilities to Terraform (creating infrastructure) but with the following major differences:

As a simple example here is an EC2 instance describe in Crossplane:

You can find more examples for Amazon, Google, and Azure. Crossplane supports several other providers, and of course you can add your own.

The important point here is that the file above is a standard Kubernetes manifest. You can:

And since it is a standard manifest, you can of course store it in Git and manage it with ArgoCD for a Full GitOps workflow. The importance of this capability cannot be overstated.

If you combine ArgoCD and Crossplane, you have a full solution for following the GitOps principles with infrastructure and not just applications. Imagine if your ArgoCD dashboard contained this: 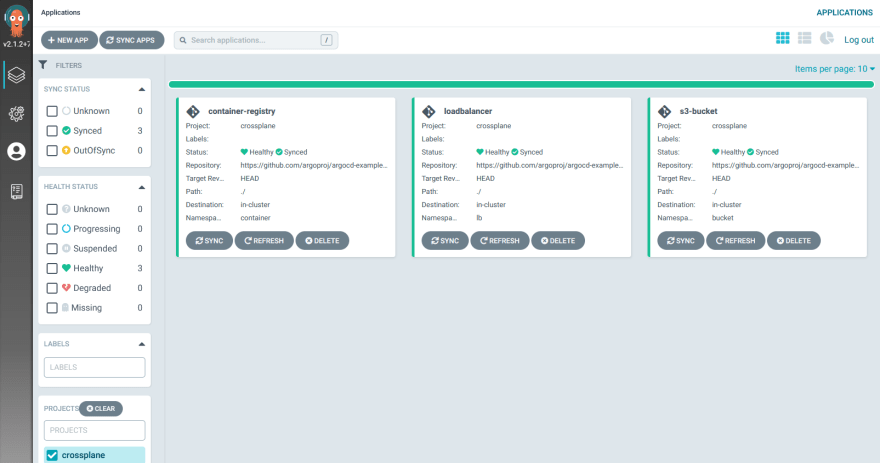 How ArgoCD and Crossplane work together

The last point is very critical. Terraform only knows what is in your infrastructure during deployment. If you make any manual changes afterwards (e.g. delete some infra), terraform knows absolutely nothing. You need to rerun terraform and pray that the correct action is taken. There are many terraform horror stories about incomplete/invalid states. Here is one of my favorite tfstate stories from Spotify.

ArgoCD will instantly detect any manual changes in your infrastructure, present you a diff, and even allow you to completely discard them if you want. 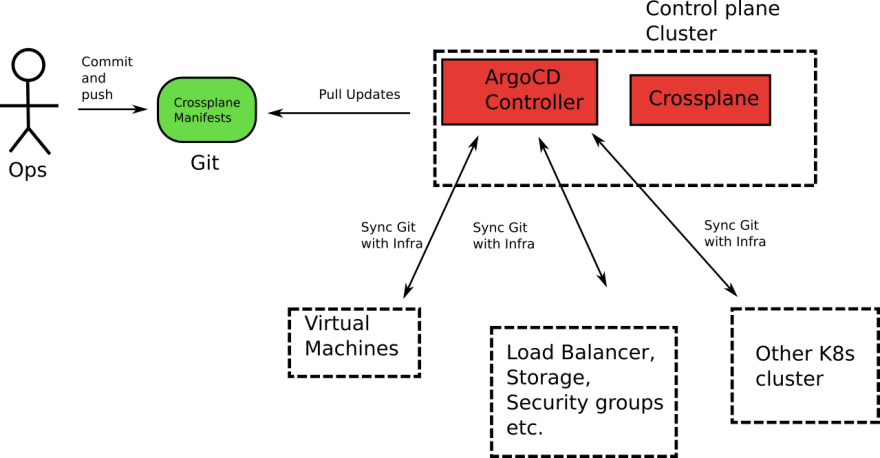 Essentially ArgoCD is agnostic as to what exactly is described by the Kubernetes manifests it manages. They can be plain Kubernetes applications, Virtual machines, Container registries, Load balancers, object storage, firewall rules, etc.

Create infrastructure and deploy to it using GitOps

Now that we saw that you can use ArgoCD and Crossplane together for managing infrastructure, we are now ready to treat applications and the platform they need in the same way.

This means that we can do the following:

Here is the whole workflow: 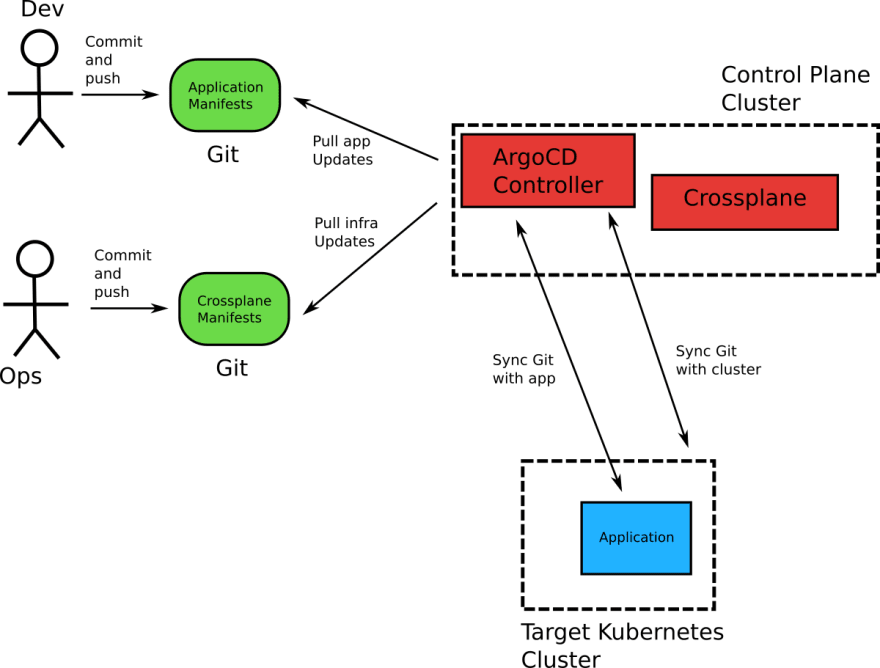 The Kubernetes cluster that Crossplane is running on is only used to bootstrap crossplane. It doesn’t get any production workloads on its own. For simple demos, this can be any cluster (even a local one running on your workstation).

The end result is that now you have a unified way to handle both infrastructure and applications right from Argo CD. 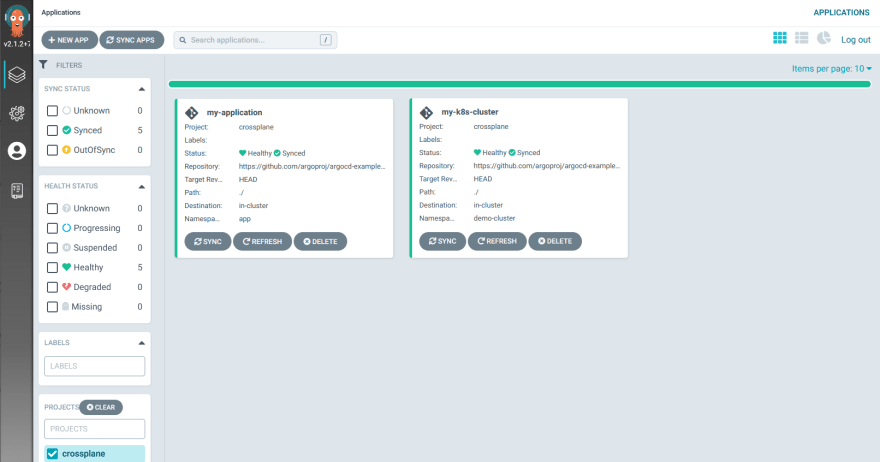 The process of changing either of them is exactly the same.

They also both gain all the benefits of GitOps. If for example somebody changes the number of replicas in the deployment or tampers with the cluster nodes, ArgoCD will detect the manual changes automatically and give you the ability to discard them completely.

Why GitOps is the way forward

The whole point of DevOps is to make everything self-service and promote collaboration between developers and operators. Adopting Crossplane in a GitOps setting means that now both parties have a common language that they can communicate with.

There is no need anymore for separate workflows that are confusing to either of them. Adopting a common workflow for both infrastructure and applications is the embodiment of the DevOps spirit.

If you want to learn more about GitOps and how Codefresh has embraced it, check out the Codefresh DevOps platform for Argo. For more information about Crossplane, see the official site and the hosted solution by Upbound.

Quickstart: Getting Started With HashiCorp Nomad

Once suspended, codefreshio will not be able to comment or publish posts until their suspension is removed.

Once unsuspended, codefreshio will be able to comment and publish posts again.

Once unpublished, all posts by codefreshio will become hidden and only accessible to themselves.

If codefreshio is not suspended, they can still re-publish their posts from their dashboard.

Once unpublished, this post will become invisible to the public and only accessible to Kostis Kapelonis.

Thanks for keeping DEV Community 👩‍💻👨‍💻 safe. Here is what you can do to flag codefreshio:

Unflagging codefreshio will restore default visibility to their posts.