It seems that every other week someone else writes in /r/AndroidDev complaining that Google unjustly removed his app. This happened to us with a few apps but usually it was because of changing policy or just stupid policy. Never anything as ludicrous as what we've experienced for the past few weeks.

A few weeks ago we got a threatening email from Google Play: 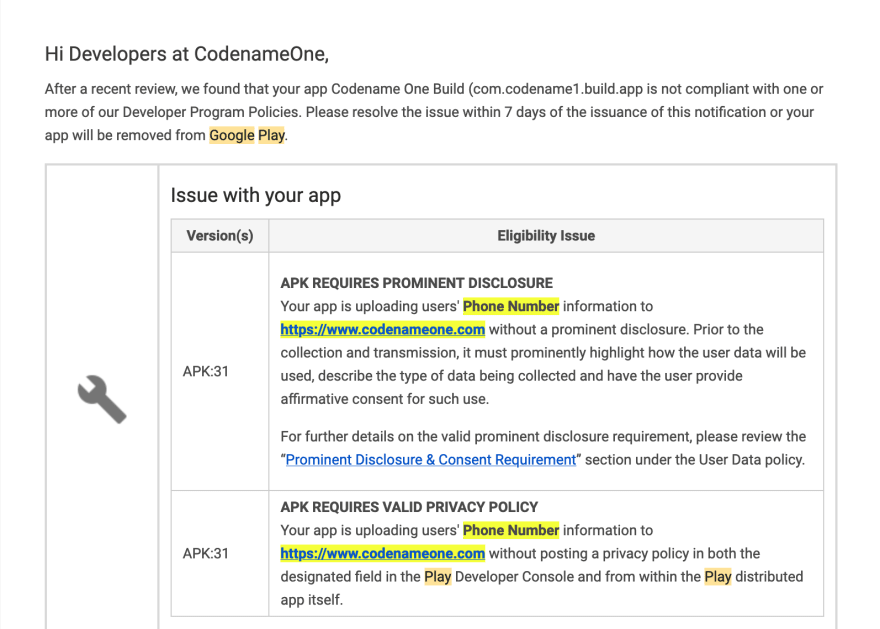 Those guys collecting user phone numbers sound like pretty bad people right... Only we don't collect any phone numbers. Never did and don't care about them at all. Wouldn't know what to do with them.

Notice the lack of any technical information in the email. How was this determined, how can this be fixed other than by saying we collect phone numbers (which again, we don't).

Also one week? What company can get anything done in one week?

So we instantly appealed the process then tried to go through all the libraries we used. Maybe something was in violation. We couldn't find anything.

In desperation I decompiled the APK: bingo!

In the AndroidManifest.xml of the APK we had a READ_PHONE_STATE permission. We didn't add it though...

It was Googles Fault

Turns out Firebase had a bug in the version we used. Updating to a newer version removed the phone permission. Jackpot.

So we built a new bundle, verified the decompiled APK didn't include that permission and chugged this down to Google being stupid about phrasing their emails and packaging their own libraries.

Our App Got Removed Anyway

Same reason, no further explanation or anything. The appeal I sent was returned with the response that our case was reviewed and we're still at fault. No further helpful information was provided.

Then it started happening to our customers: https://stackoverflow.com/questions/68921544/google-play-recent-review-notification-apk-has-a-prominent-disclosure-but-the

This means there's something seriously problematic in Codename One and we can't find it. We spent weeks pouring over every single thing that might impact Googles review process. We resubmitted the app with minor changes dozens of times, to no avail. Unfortunately, every submit meant two days of waiting period until we got rejected again.

The rejection system didn't even indicate if there was any "improvement". Are we on the right track? Is anyone there?

I won't go into all the things we tried but we tried a lot of variations on the solving the problem... Nothing worked.

So the obvious thing would be "write to support", surely the can help?

There's a support button that in my case literally leads you in a constant redirect loop back to Google play. Maybe it's because I have multiple Google Accounts and multiple play accounts. I still have no idea. But Steve was able to get an email chain going. It was 30 emails deep by the time we solved the issue.

So early on I had a suspicion that this was due to one of our old beta/test tracks. They are all disabled and haven't been used since we originally created the app a few years back. So naturally I updated the version in all the beta/testing tracks and then proceeded to pause all of these tracks.

It turns out that this wasn't enough. We had to literally submit an alpha, go through the process. Graduate it to beta and then to production. This was the only way to "clear" the old broken version that we had.

Originally a few years ago a phone permission was a part of the app (which was a valid case back then to handle Android bugs, not collect phones or anything). This was in a paused unused old alpha channel... Instead of suspending the alpha channel or just writing to us that we have a problem in that old unused channel our entire app got suspended with no support!

Amazingly this same thing happened to our customers.

I had my share of run-ins with Apples review process. It isn't pleasant. But there's a human being on the other side. They answer, they communicate, they use technical terms to explain the problem. Hell, they even called me over the phone twice to discuss my problem.

Google used to be better, flawed but better. It seems that in its zeal to copy Apple they copied all the bad stuff without the good stuff.

This latest experience has really soured me further on Google. I used to be such a fan of the company, but things like this make me want to completely degoogle my life. I'm still an Android user but with every incident like this I feel a strong urge to move back to iOS. It's a shame we have so little choice here...

My Favorite System Design Courses for FAANG Interviews in 2023

Once suspended, codenameone will not be able to comment or publish posts until their suspension is removed.

Once unsuspended, codenameone will be able to comment and publish posts again.

Once unpublished, all posts by codenameone will become hidden and only accessible to themselves.

If codenameone is not suspended, they can still re-publish their posts from their dashboard.

Thanks for keeping DEV Community 👩‍💻👨‍💻 safe. Here is what you can do to flag codenameone:

Unflagging codenameone will restore default visibility to their posts.