Open Source is an excellent idea. It proved itself to create large and complex products with a shared workforce. It also allows products to follow the input and guidance from several players. Products don't have to follow the demands of one company or their stakeholders. We build for the platform and the community, not for the next financial quarter.

Open source is a win for companies

For companies, open-sourcing their products means throwing them out to the scrutiny of the masses. People can contribute and build functionality the company hasn't considered as it didn't have that need. It is also an amazing opportunity for recruitment. Hiring people is hard and expensive. Cutting down on the time you need to ramp up a new employee is a real business benefit. Contributors are potential hires that already come with expert knowledge. It also is a way of ensuring quality. It is much harder to hide flawed code in plain sight than in a company internal repository.

Open source was my way in

I owe a lot of my career to Open Source and similar ideas like Creative Commons. That's why I keep contributing and publishing. Without shared, open, free knowledge I wouldn't have started working in web development. I couldn't afford Frontpage and couldn't find a cracked version. Instead, I downloaded the HTML and CSS spec from htmlhelp.com, opened a text editor and got on with it. This was a time where I didn't have any connection at home, so I needed the docs offline.

Starting with this, I always felt that being open from the get-go is the right thing to do. To pay forward what I enjoyed, so to say.

Now, things look different. Open Source has become a household phenomenon and it is not a small group of enthusiasts any longer. It proved its value and the size of communities and open source releases exploded.

The problem with open source is the same problem with many other things: people. Communication is hard and considering what you say and do before doing it seems too much to ask. I was pretty naive about this in the beginning, too. I thought that people who share things would be nice and open people. I assumed a lot of them would also be in on my liberal views on other topics. I was wrong. People are people and they come with their flaws and ideas, biases and prejudices. They also come with their own issues they deal with. Those influence how they communicate with others.

And communication is the life blood of open source. It is not about writing some code, throwing it out there and letting people deal with it. It is about building a community around your code. It is about triaging requests and features to other people. This ensures the product can grow and prosper when you are bored of it or your company stops sponsoring it. It is about making it easy to share, to contribute, to use and to tweak to your needs.

This doesn't gel with the image of the 10x developer and the drive for constant change and growth in the market. With lots of money and opportunity comes a lot of greed and arrogance. And thus, I keep hearing open source horror stories:

The problem reaches far. Open Source is getting a reputation for being arrogant, aggressive, hard to get into. In its most extreme way it gets as far as recommending OSS being a Code of Conduct violation. 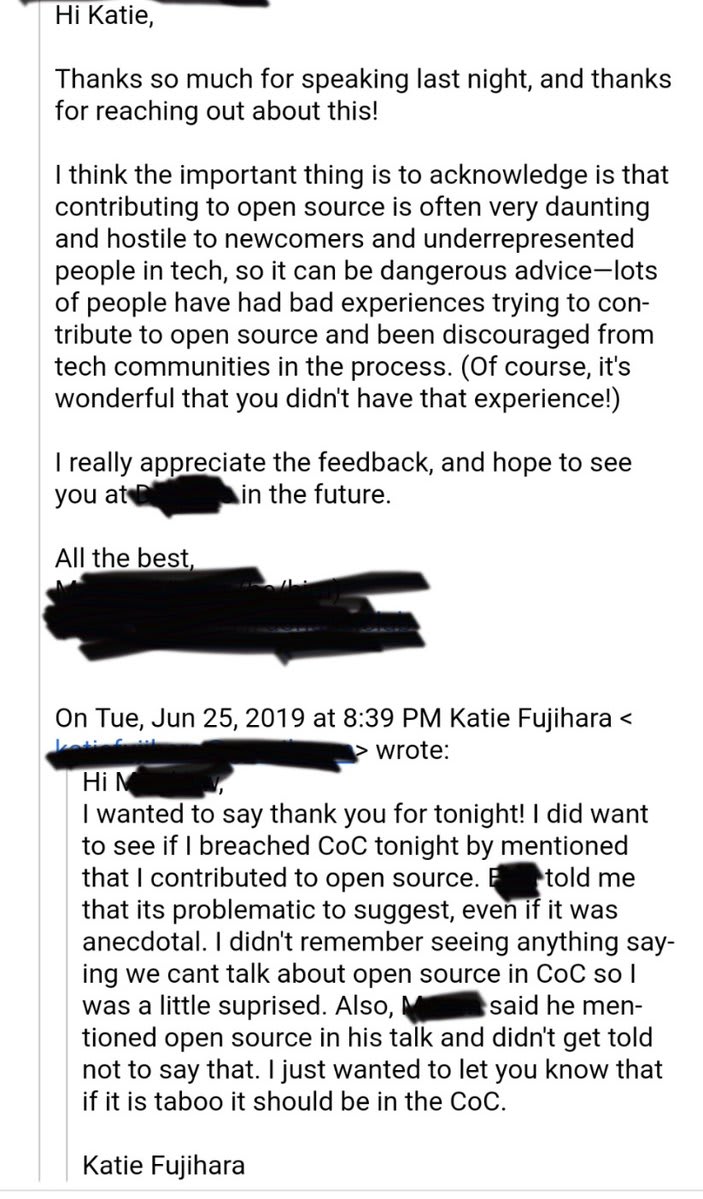 Recently, I spoke at a local meetup about my experience breaking into tech and things I did, that people can do too. The fact that I said contributing to OSS can be a great thing to do, I got flagged for breaking CoC because it was a "microagression." I am absolutely appalled.

Disregarding the questionable argument in this case, there is a problem. It is frustrating to see that an open, collaborative idea like Open Source is getting a bad reputation. One of being exclusive and discouraging, no less. The very thing it set out to disrupt and change.

I've worked in OSS for a long time, and I have on the whole had a great experience. I also am a white man who comes with a lot of credibility because of what I have done in the past. So my personal experience isn't a universal one - by a long shot. I also had bad experiences. I've seen bigotry, arrogance and straight up malice. I've seen a lot of "play by those rules or leave the sandbox". I've experienced far too much "are you better than this other person?". I have experienced blocking by association and acts of other people affecting my reputation.

To a degree, things were much better before social media and the cult of the "persona". Things were better before we compared each other by our number of products. And before our online presence became a way to land a job or get sponsorship.

It might be time to move away from releasing for the sake of visibility and go back to the more human and collaborative ideas of OSS. Hiring a person who shows great communication skills and empathy in their OSS dealings is a great investment for your company. These are the people who will power long-term growth and stability. Hiring the loudest, most active and aggressive people is a good short-term boost. The tech press and shareholders love a "go-getter" and "innovative and disruptive" story. Keeping those people happy in a company is a different task though companies often fail at.

The same applies to open source rockstars taking their product to the next level by starting a company around it. I'd love to see great stories around that. Instead I see explosive growth with a rushed human side of an employment relationship . It is tough moving from coder to employer and company owner. You need to deal with a lot of human issues and being all about the "hustle" is counterproductive to that.

Disregarding OSS as an amazing evolution of software development and great idea based on the actions of individuals is unfair and makes no sense. The very fact that the human interaction is part of the process is what makes open source interesting to me. Consider the opportunities:

Of course, this comes with a flipside:

That means we have to play by rules that run any human interaction. If we do that, Open Source might get a better reputation again.

I'd hate something that impactful and great being taken down by the actions of a few bad or deluded actors.

A smarter dotenv for Node.js