Today, we want to provide you with the final part of the article dedicated to Vue vs React. Here we compare these tools by such technical aspects, as performance, state management, and storage data reception. In case you missed the second part, here is the link for your convenience.

If you want to read the full article version now, here is the link.

Let’s get this show on the road.

In order to see and compare ReactJS and Vue.js performance, we come to a well-known js-framework-benchmark. It assisted us in comparing both web development tools. 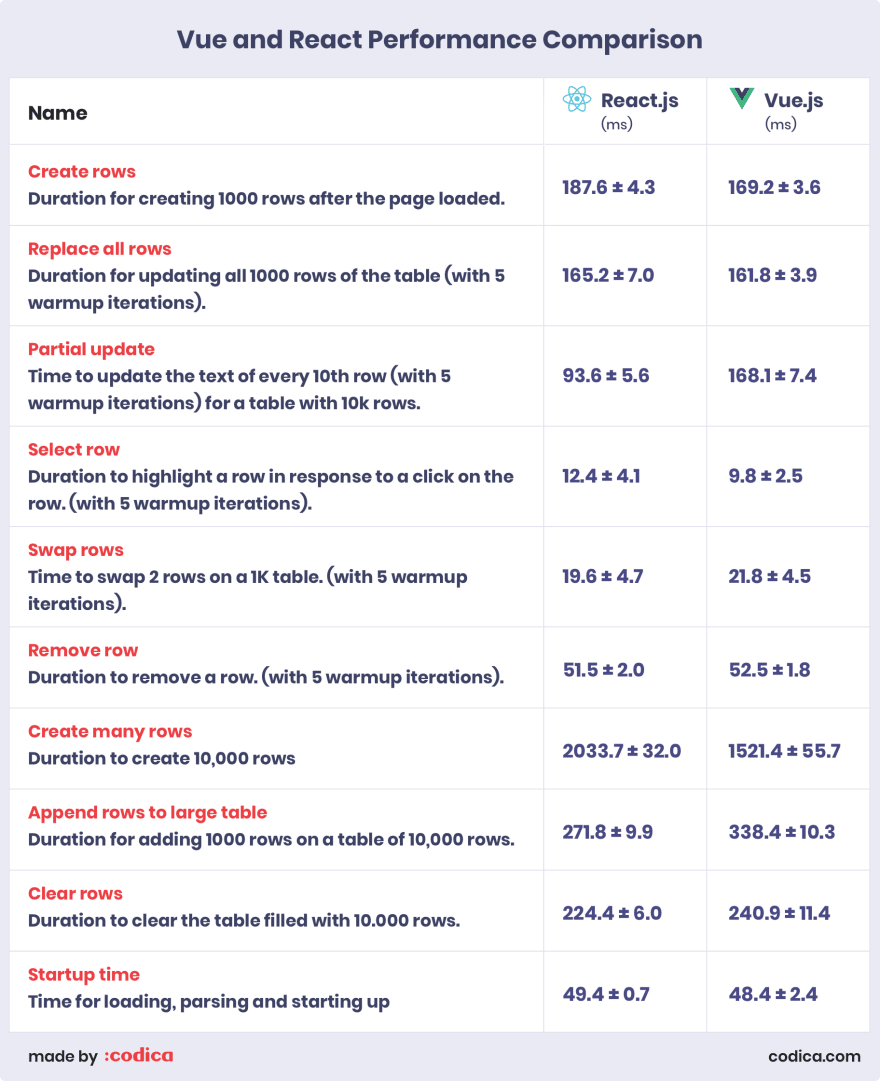 Generally, both Vue and React have similar approaches in managing the application state but still, have some variations in immutability. Here we provide you with the key points of difference.

It is rather tedious to create UIs. The matter is that states are present throughout — data changes eventually. Thus, it increases the level of complexity. When you face the situation of application’s growth and scalability, state management helps you a lot. Considering small applications, this is not so crucial, so that some tools like Vanilla JS would be enough.

You may wonder how state management works, right? To be exact, application components describe a UI at a certain time. When the state changes, the framework redraws the entire UI component - the data displayed is always up-to-date. Thus, we can call this approach “UI as a function”.

Put it another way: the state is totally in the object tree inside the unified storage. It gives an opportunity to debug the application and some functionality becomes easier to implement. The state is read-only and can be changed only through actions, called reducers. They are created to indicate how actions can change a state.

In general, both frameworks are utilized within some kind of data flow library. Redux is the most popular choice for React and Vuex is for Vue. Honestly, the transition from Redux to Vuex is essentially painless, since the two libraries (Redux & Vuex) have much more in common than ReactJS and Vue.js themselves.

As you have already understood, React is often paired with Redux. It describes itself in three fundamental principles:

The main difference from Vuex is that Redux relies heavily on state immutability. The reason is that Redux was created considering ReactJS. However, it is recommended to avoid mutating values ​​that you use as a prop or state to optimize React performance.

On the flipside, Vuex does not care about the immutability of the state.

Considering Vue, the dependencies associated with the component are automatically tracked during rendering. It means that the framework knows exactly what components should actually be re-displayed when the state modifies.

To sum up, state management is the main difference between these two web development tools. Unlike Redux, Vuex modifies the application state instead of making it immutable and replacing it completely, as with the Redux reducers.

Dealing with storage, we can use the same data multiple times in different application parts. That is pretty important as this way we do not need to build the same function each time we want to get access to the component’s data.

If you want to use the storage inside React components, you need to connect them via connect() function in Redux. Honestly, one of the hottest topics in React/Redux data stream is deciding what components to connect.

For such situations, React provides quite a useful pattern: divide the components into Containers (Smart) and Stateless (Dumb) components. Components connected to the storage are usually called Containers, and the Dumb components are usually a simple function that returns a markup.

Considering Vue, you do not need to think about some divisions and data stream issues. The matter is that the storage is available from any Vue component:

What does it mean? Actually, the number of details that you pass from one component to another is limited and is only required for data that is not stored in the repository. This is pretty reasonable, given that passing props to Vue has a very awkward syntax:

As you can see, the storage in Vue is available in any component, although the transfer of props in Vue is more inconvenient The quantity of requisites that you really have to pass is rather insignificant compared to ReactJS.

You need to use React in case you build up a complex web application, such as an e-commerce platform, marketplace, etc.

Future maintenance and customization are much easier through the community volume. The matter is that you can behold a large number of contributors and programmers ready to build any application.

On the other hand, Vue is a perfect choice for you if you want to create lightweight and easy-to-fix applications. Honestly, the learning curve is lower that allows mastering the framework in a short period of time.

Up to date, Vue community is smaller than React but it is growing rapidly that makes it easier to create the same solutions as using ReactJS. As the contribution volume grows, the number of tools and libraries available becomes larger, too.

To sum up all the pros and cons, let’s have a look at the Vue.js and React comparison table. 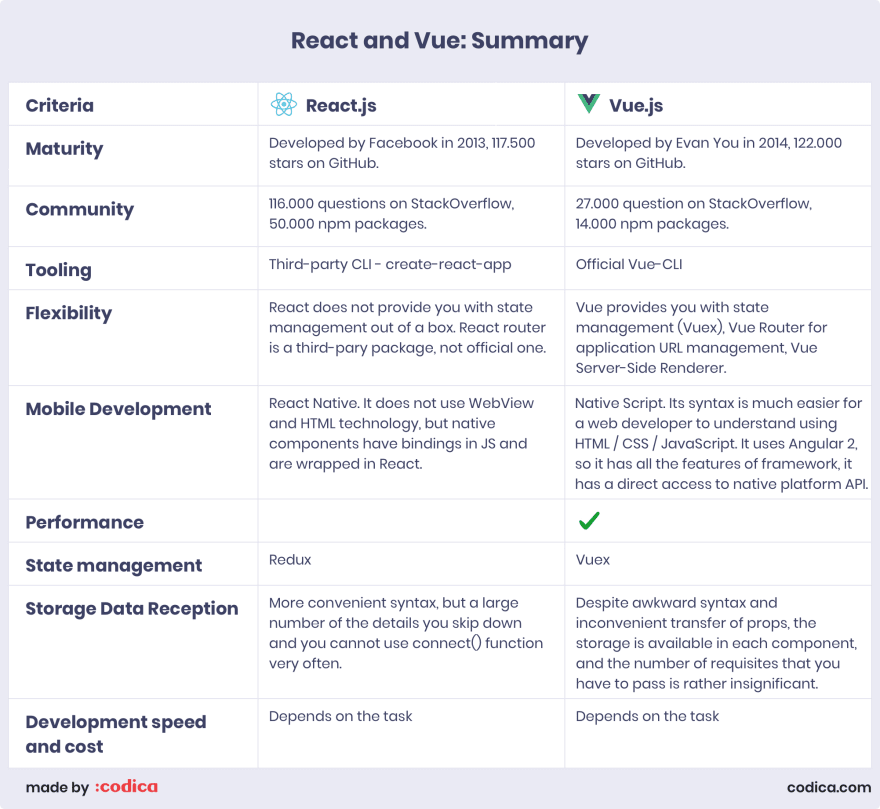 As we can see, both Vue and React have powerful tools and features that help us in web development. However, while choosing what to adopt you need to bear in mind those differences presented in the table to make the right choice.

When to choose React or Vue?

Both React and Vue can be used for any needs and requirements such as the creation of web applications, single-page applications, and user interface components.

To conclude, let’s sum up all the information, pros and cons of the mentioned web development tools to see which one will be a better choice for your business.

Here is the comparison table considering different factors to choose ReactJS or Vue.js: 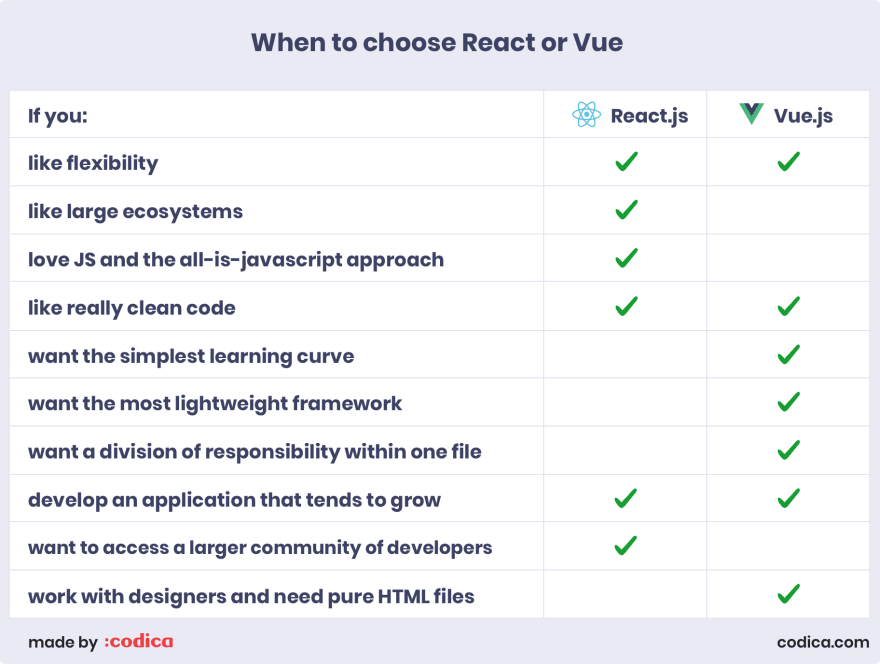 Whatever you choose - you cannot go wrong!

Once unpublished, this post will become invisible to the public and only accessible to Codica.