Germany is fast becoming Europe’s top destination for developers. As of 2019, there were over 901,400 professional developers spread throughout Germany’s tech hubs, with the majority situated in Munich, Berlin and Hamburg. With thousands of unfilled tech positions, fantastic career opportunities, and a great lifestyle to enjoy, it’s apparent why Germany has become so attractive for developers locally and internationally.

We recently released the Developer Happiness Index: Germany which sought to answer two questions: how happy are developers in Germany, and what exactly makes them happy? Here are a few of the key things we learnt.

Developers in Germany are the 8th happiest in the world

Compared to the rest of the world, developers in Germany report higher levels of satisfaction across all happiness factors with the exception of climate and work-life balance. With regards to their careers specifically, work-life balance is considered most important for their happiness, followed by work environment. Salary, however, is considered less important to developers in Germany compared to their global counterparts.

In Germany, 78% of respondents consider work-life balance “very important” to their happiness, yet just over ⅓ of them are very satisfied. Nonetheless, Germany has some of the highest worker productivity levels in the world, ranking third internationally in 2017.

Developers in Germany also benefit from a very established welfare system where they’re protected from existential risks by numerous state insurance policies across health, pension, and unemployment. Their paid vacation leave is quite average for the European Union (although favourable compared to other Western countries) and parental leave is fair; mothers are entitled to 14-weeks paid maternity leave (what you receive depends on your employment and health insurance), plus parents are entitled to up to three years of parental leave.

Overall, Germany boasts three major cities in Getkisi’s Work Life-Balance Index 2019 (out of 40), with Munich, Hamburg and Berlin finding a place in the top 10. 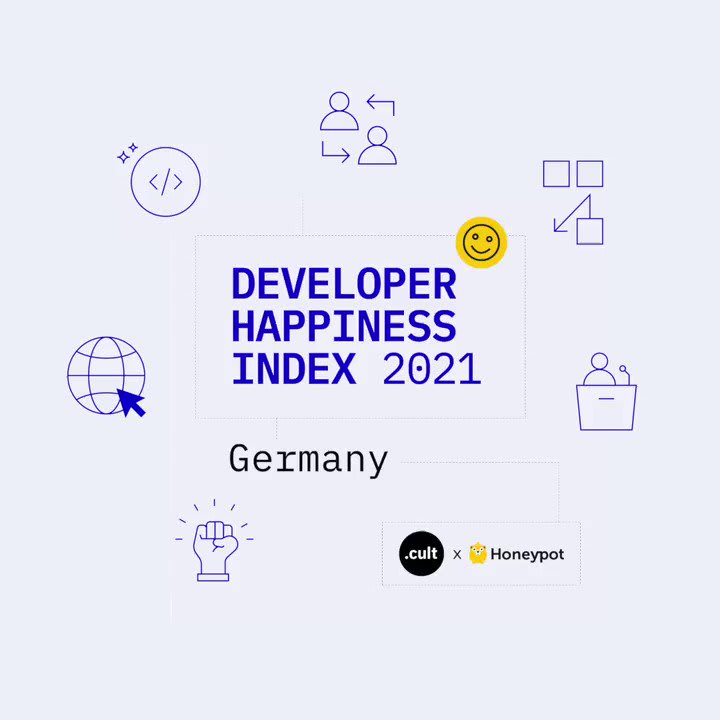 Find out what a dev career in Germany's like
👉 bit.ly/3mdMGHo 🇩🇪

Similar to the reported global average, more experienced developers in Germany are the least satisfied with their work environments and company cultures, and adversely, junior developers are more satisfied than the world average.

The disparities don’t end there. Junior developers in Germany also report higher levels of satisfaction with their learning opportunities than more senior developers, and compared to the rest of the world, access to them is more important.

Growth and learning opportunities are the most common reasons for senior developers to jump ship and switch roles. Many spoke of stagnating trajectories and lack of challenge.

According to our data, the average salary for a software engineer working in Germany is approximately €50,418, but the average developer salaries in Germany vary from city to city.

According to Glassdoor, the highest paid jobs (on average) are in Munich, Frankfurt, and Hamburg while the lowest are in Berlin and Cologne.

Tech stack ranks as the least important factor in determining developer happiness at work, although it is still considered very important by almost 24% of developers in Germany and somewhat important by a further 48%.

So, how happy are developers in Germany?

Overall, developers in Germany are pretty happy, but that doesn’t mean they shouldn’t be happier. In their own words, a healthy work-life balance, the ability to engage in continuous learning and career growth, and being a part of a healthy work environment and company culture are most conducive to their overall well-being and happiness. 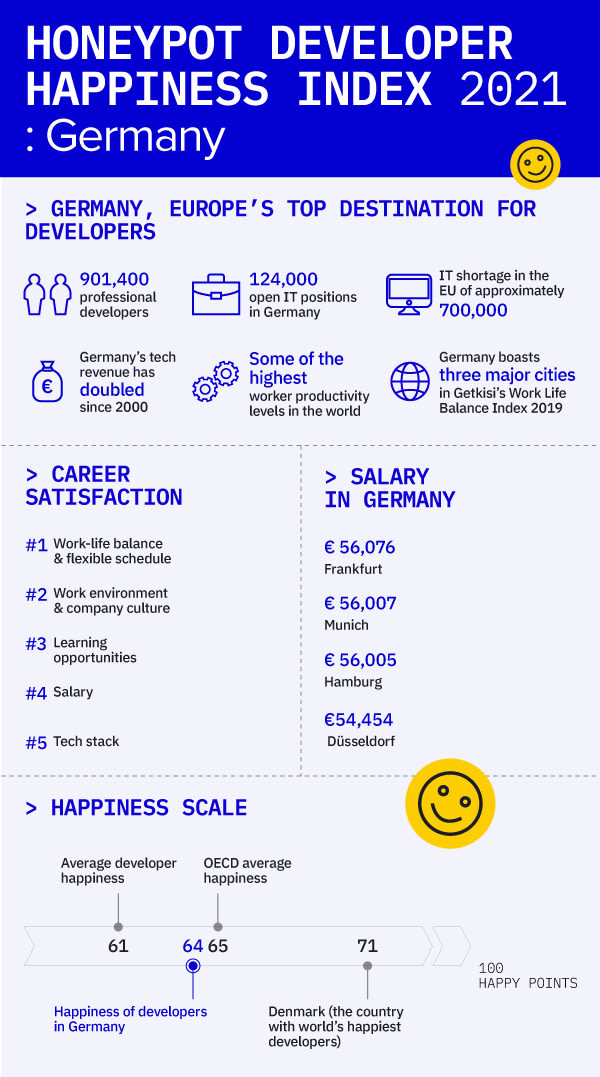 .cult by Honeypot
We're on a mission to get developers great jobs. We're also creators of the Vue.js and GraphQL documentaries, and we tell untold developer stories over at .cult :)
Developer Salaries Germany 2021 Report: tl;dr
#career
LSD and Programming
#programming
Developer Happiness in The Netherlands TL;DR
#mentalhealth #programming #career #productivity

Once suspended, cultbyhoneypot will not be able to comment or publish posts until their suspension is removed.

Once unsuspended, cultbyhoneypot will be able to comment and publish posts again.

Once unpublished, all posts by cultbyhoneypot will become hidden and only accessible to themselves.

If cultbyhoneypot is not suspended, they can still re-publish their posts from their dashboard.

Once unpublished, this post will become invisible to the public and only accessible to .cult by Honeypot.

Thanks for keeping DEV Community 👩‍💻👨‍💻 safe. Here is what you can do to flag cultbyhoneypot:

Unflagging cultbyhoneypot will restore default visibility to their posts.