TLDR: Understand what you're doing, try to understand other paradigms and understand that it's about the team - not you as a singular developer.;

Hi, I'm Joakim and I'm new here. I have however been in the dev game for a long time now, so I thought I'd share some thought with those who are new to the profession.

It's been around eight years since I made my first commit as a paid developer. "Paid" is almost a stretch, as I was an intern at an ad agency in London and the pay barely covered my rent. It was a fun time though, as the result was some cool pitch stuff for some major brands and a "Website of the day" award from The FWA.

For me, the first four years as a developer was riddled with impostor syndrome. I know a lot of you feel the same and while the comforting "everyone goes through it" probably has been bashed in to your skulls at this point I think I can help you even more. So, humor me while I type down my ramblings.

At times you'll see design patterns you're unfamiliar with, or technology that solves an issue in a new way. The last example for me would probably be how deno handles remote imports or how observables differ in RxJava and javascript.

The important part when seeing things like these is not to like it, but understanding why it's being done. Quite frankly it's good to have an opinion, but important to know why you do.

A thought experiment could be the utility css-classes in Tailwind:

When this started gaining traction among developers a lot of people where against it.

That many classes just pushes styling to the markup, so that can't be good right? We learnt in school that we should separate styling and content!

Turns out it's a good idea. Why? Because we've moved a lot of how we handle markup into component based frameworks like React, vue and svelte. It makes sense as we're no longer authoring documents, we're authoring individual parts! Apart from the example above, I haven't had to write manual css in a long time, and it seems the results are a bit more consistent thanks to tailwind and tachyon.

Ya gotta try new stuff to learn new stuff. Preferably really alien things. New paradigms come from all over the place. Spending some years with object oriented java made me a better javascript developer, and while I don't think I'll need my skills in WebGL that often I've still learned a lot.

So experiment! Make it weird! You don't always have to understand it or want to work with it in the future. Make a game in Godot or try making a shader in shadertoy. Or just make a tinder clone in vs code like benawad? 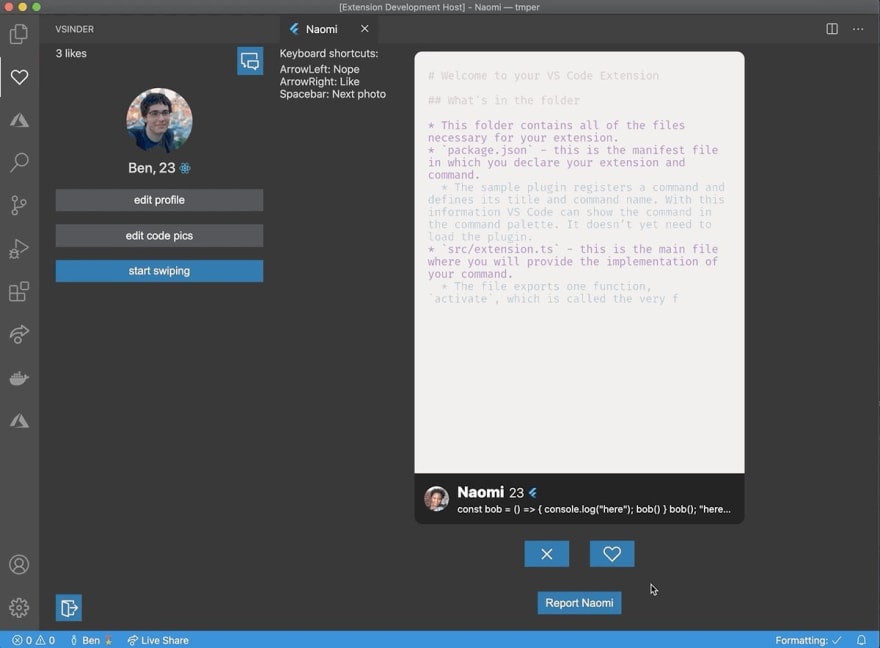 This might feel like a weird point to make after talking about how important it is to experiment, but hear me out. Programming is a skill, and like all other skills it needs to trained. The truth is that you're unlikely to master anything without just doing it a lot for a long time.

So, I advice you to do what I did. Use old tech. Refactor, a lot. Write tests, a lot. Try to automate a task that seems boring. Jump on the chance to fix a bug in that old legacy system. Try to draw parallells to modern development - why did we do it like this? Debugging is a skill worth mastering.

"Don't be too clever," is one of my mantras.

It's been joked about a lot but it's true. You think you know everything until you know enough to know you know nothing.

Being a developer is only partly about the hard skill of programming. It's also about teamwork, communicating ideas and solving problems. The nature of teamwork is that there's bound to be different perspectives. Over a career you're bound to be wrong some times. In hindsight - a lot of times. Which is good, that's how you learn.

Can we talk about this feature? Please

Once suspended, cupofjoakim will not be able to comment or publish posts until their suspension is removed.

Once unsuspended, cupofjoakim will be able to comment and publish posts again.

Once unpublished, all posts by cupofjoakim will become hidden and only accessible to themselves.

If cupofjoakim is not suspended, they can still re-publish their posts from their dashboard.

Once unpublished, this post will become invisible to the public and only accessible to Joakim Wimmerstedt.

Thanks for keeping DEV Community safe. Here is what you can do to flag cupofjoakim:

Unflagging cupofjoakim will restore default visibility to their posts.