As a change of pace for our sprint retrospective, I decided to try a little experiment using the "Deep Sea Adventure " game. In this little table-top game, each player is a diver trying to grab as much treasure as they can, being sure to make it back to the submarine before the oxygen supply runs out. 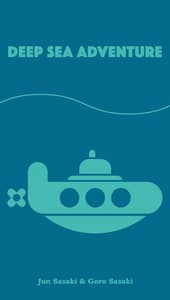 We played four rounds. We varied a bit from the actual rules by returning all retrieved treasures back to the initial start configuration, so that each round was like the start of a new game.

First, we played one round of the game as it would normally be played, with every player for himself. This provided everyone a chance to get a feel for how the game works, and how the greedier you get, the faster you use up the available oxygen supply.

After that, we played three rounds in a cooperative mode, with the stated goal being to score as many total points as possible when adding our scores together. (Otherwise the rules and mechanics stayed the same.)

While luck can play a critical role in this game at times, we managed to increase our total score each round; so in a very limited set of test data we proved that planning is better than no planning, and continual feedback and adjustment of plans are even better. 😉

If interested in learning more about the game, this Youtube video begins with a rules explanation, then they play a full game (which only takes about 17 minutes).

Group project tip: How to set up a Jira board and link it to your GitHub project

Once suspended, cwreacejr will not be able to comment or publish posts until their suspension is removed.

Once unsuspended, cwreacejr will be able to comment and publish posts again.

Once unpublished, all posts by cwreacejr will become hidden and only accessible to themselves.

If cwreacejr is not suspended, they can still re-publish their posts from their dashboard.

Once unpublished, this post will become invisible to the public and only accessible to Charles Reace.

Thanks for keeping DEV Community 👩‍💻👨‍💻 safe. Here is what you can do to flag cwreacejr:

Unflagging cwreacejr will restore default visibility to their posts.