The purpose of mining is probably a little confusing at first. I will keep the Bitcoin blockchain as an example throughout this article. Mining is NOT about creating new bitcoins. Mining is the mechanism that allows the blockchain to be a decencentralized security. It secures the bitcoin system and enable a system without a central authority. Do not confuse the rewards given to miners ( new bitcoin ) with the process itself.

Miners validate new transactions and record them on the global ledger ( blockchain ). On average, a block ( the structure containing transations ) is mined every 10 minutes. Miners compete to solve a difficult mathematical problem based on a cryptographic hash algorithm. The solution found is called the Proof-Of-Work. This proof proves that a miner did spend a lot of time and resources to solve the problem. When a block is 'solved', the transactions contained are considered confirmed, and the bitcoin concerned in the transactions can be spend. So, if you receive some bitcoin on your wallet, it will take approximately 10 minutes for your transaction to be confirmed.

Miners receive a reward when they solve the complex mathematical problem. There are two types of rewards: new bitcoins or transaction fees. The amount of bitcoins created decreases every 4 years ( every 210,000 blocks to be precise ). Today, a newly created block creates 12.5 bitcoins. This number will keep going down until no more bitcoin will be issued. This will happen around 2140, when around 21 millions bitcoins will have been created. After this date, no more bitcoin will be issued.

So, yeah, 21 millions will be probably the maximum amount of bitcoin issued in the end!

How does it work, anyway?

The question is, how can everyone in the network agree on an universal 'truth' about bitcoin ownership, without having to trust anyone in said network? The blockchain is not created or managed by any central authority. Every node has access to the public ledger of transactions that acts as an authoritative record. Somehow, every node in the network, acting on those insecure informations, come up to the same conclusions and are able to replicate the same ledger. Let's try to explore how this works.

It will probably help if we take a real life example. Meet block #502426. We'll follow the lifecycle of this block from its construction to its final validation. Let's say the winning miner was called Joe.

In the world of Bitcoin, it takes approximately 10 minutes to validate a new block. Our miner Joe was competing to validate the block 502425, the previous one. Unfortunately, someone else solved the problem before him. But, the end of one block's competition means the beginning of a new one. As soon as the block 502425 was mined, Joe updated his local copy of the blockchain and starts to create a candidate block, the block 502426. While Joe's computer ( or node ) was searching for the Proof of Work for the previous block, it was also listening for new transactions. Those new transactions are added to the memory pool or transaction pool. This is where transactions wait until they can be included in a new block and validated.

So, we can see that block #502426 has 3189 transactions inside it. This was the number of transactions present in Joe's transaction pool when he created his candidate block. 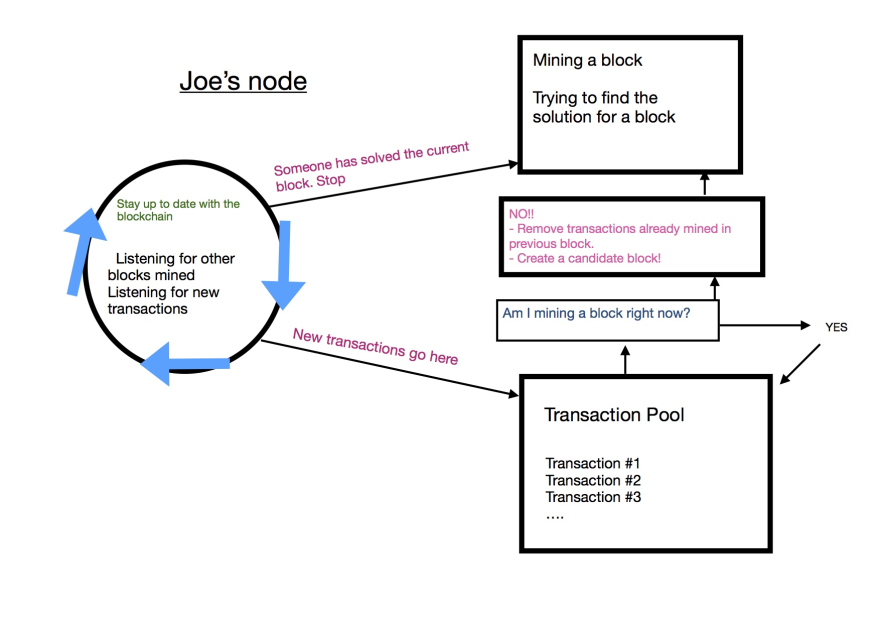 You can see the details of this transaction in the list below.

You can see No Inputs (Newly Generated Coins). Like I said, coinbase transactions do not come from anyone's wallet, so they can't have any inputs. You only have the winning miner's wallet address here.

In a previous article, I described what was contained in a block. Joe's node has the responsability to create a proper block header for the block he is mining. In the article, I mostly focused on the merkle tree, a summary of transactions and mentioned that there are three different sets of data in a block header: the previous block hash, the merkle tree root and data for the mining competition. We'll dig deeper in the last one.

The target field defines the required Proof of Work to make this a valid block. To put it simply, the target is generated by the network and defines what makes a block's hash valid or not. If your hash is higher than the target, it is not valid. This is what is used to calculate the difficulty. In our block, the difficulty is 1,931,136,454,487.72. Take a look at the block's hash:

The last field is the nonce. It is initialized to zero.

Everything is now ready for Joe's node to mine the block. The goal is to find a value for the nonce that will results in hash lower than the target. So, the mining node will try billions or trillions of nonce values before it gets a valid hash.

In a picture, mining is: 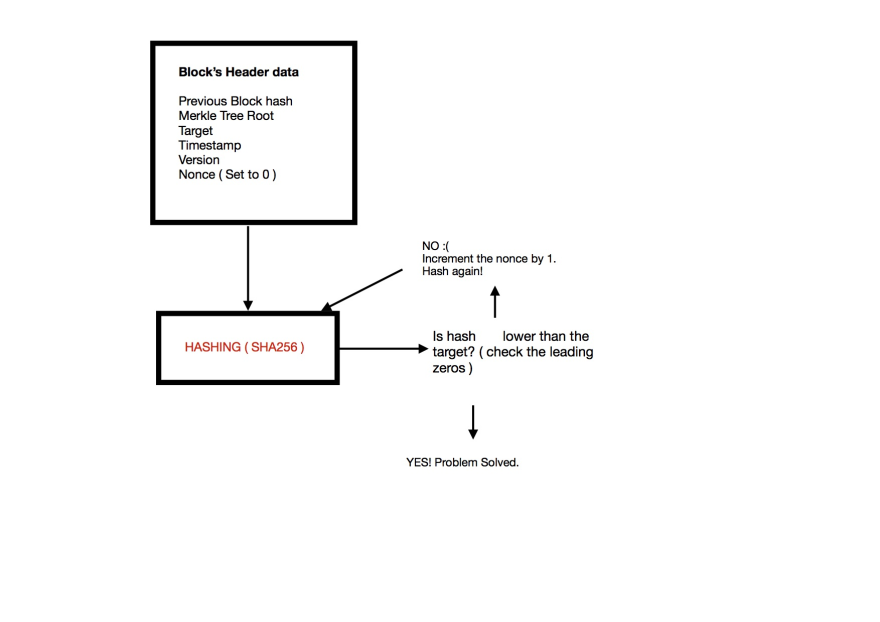 As you can see, mining is like a lottery. There is no way to predict which nonce will solve the problem.

In a previous article, I implemented a simple blockchain that demonstrates the concept of a nonce and how it changes the hash created.

In the case of Bitcoin, the hash function used is called SHA256. A hash algorithm always produces the same arbitrary length data given the same inputs. It is impossible to compute the same hash with two different inputs ( collision ). It is also impossible to predict the output of any given data in advance.

SHA256 always produces an output 256 bits long. Mining is finding the nonce, the only input that changes every time we run the hash function. It is very easy to prove that the nonce found indeed produces a valid hash. All the informations are available, everyone can run the hash function and confirm if the hash is valid or not. Because it is also impossible to predict what the nonce will be, it also act as a proof that the miner worked to get a valid hash ( Hence => Proof-of-Work ).

In Bitcoin, a block is mined every 10 minutes or so. The difficulty is calculated so that it never deviates too much from this limit. If the difficulty stays the same in the long term, while computer power increases, it will take less and less time to mine a block. To make sure this doesn't happen, the Proof of Work target is a dynamic parameter. In the Bitcoin world, the target is adjusted every 2016 blocks. Then, we check the amount of time it took to mine those 2016 blocks. It should have taken 20160 minutes ( 2016 * 10 minutes ). The difficulty increases or decreases depending on the time it took to mine those blocks.

Joe's node is getting to work and starts hashing the block's header. After approximately 10 minutes, it discovers a valid hash. We can see the nonce used was 2469953656 ( Nonce in left column ).

Joe's node immediately transmits the block to all its peers. They need to validate the new block before propagating it to its peers. This is the part where a dishonest miner can be found out. If the data is invalid, the miner would have wasted his time and computing power. Valid data includes:

Every node validates independently new blocks following the exact same rules. This assures that miners cannot cheat. This is a key component of the decentralized consensus.

If the block is valid, the other miners will update their own copy of the blockchain with the new block 502246. Joe's block hash is now used by all the miners to mine the block 502247.

Does adding a PAYABLE keyword in Solidity actually save GAS?