When using Infrastructure as Code there can be situations in which we need to use the same value multiple times and in different locations, but what if our configuration has changed and we need to modify that value. It can be a little tedious to do, depending upon the number of times that value appears.

Well, in that situations we can use variables to have a central source from which we can import the values from 😎.

How to use them

To use variables we have to create a file in which we will place them. As standard, the file must be named variables.tf.
In that file we need to specify the name of the variable, type (optional) and the default value (in case another value is not specified, TF will take the default one).

The syntax is as follows:

Once we have declared and defined our variable, we can use it with the next syntax:

We just need to type var. followed by the name of the variable, in this case instance_type.

Variables in Terraform can be assigned values in multiple ways, some of these include:

If we have a file named variables.tf with the variables defined and a default value within it, Terraform will take it in the execution as we did it in the previous example.

If there is not a default value set to that file, when we run Terraform plan it will prompt to us to set a value to the variable.

As best practices, it is recommended to have two files to use variables:

So for instance, we can have something like this: 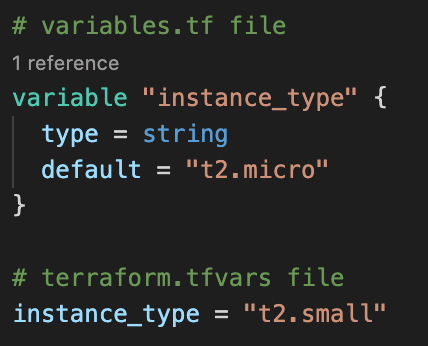 It is important to mention that the terraform.tfvars file must not be included in a repository, so it has to be added in a .gitignore file.

Also, this file must be named as this, otherwise we need to specify the name of the file in the CLI:

If not explicit value is specified in the terraform.tfvars file, it will take the default one.
We can specify an specific value to variable using something like this in the CLI:

In case you don't have a terraform.tfvars defined but you have a variables.tf, we can set the value of the variable using environment variables, we just need to export them with the next structure:

And when we execute a terraform plan for example, TF will take the value of the exported variable.

The type argument in a variable block allows us to restrict the type of value that will be accepted as the value for a variable.

If no type constraint is set then a value of any type is accepted.

There can be situations in which we have variables defined as map or list and we just need one of those values inside of them.
For example, suppose the next scenario: 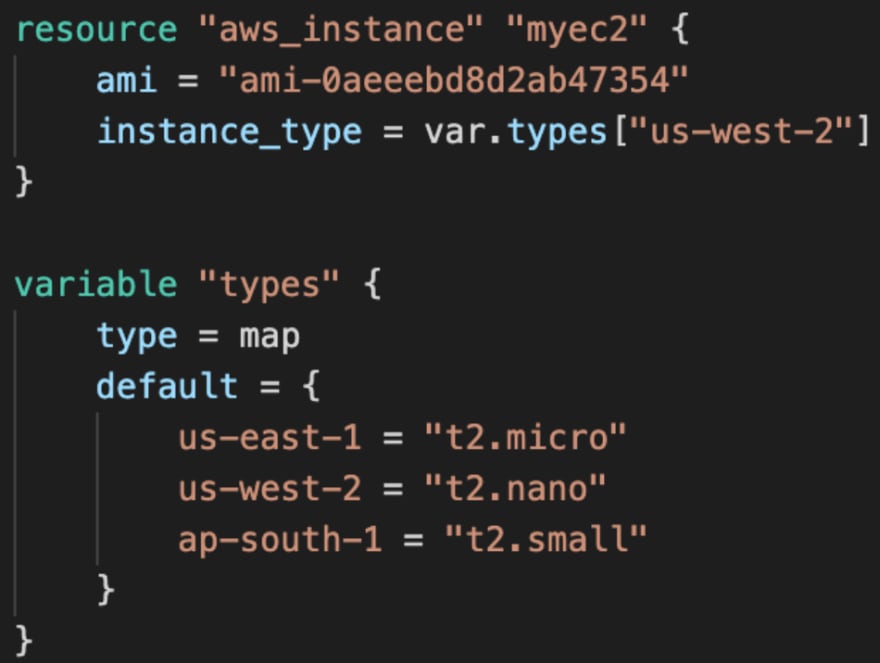 In this case, the instance type is going to take the corresponding value for the "us-west-2" key (t2.nano).
If we will use a variable type as List, we have to select the position of the element we want like: instance_type = var.list[0]

Now you are able to use variables in your Terraform configuration files, remember that are different ways to use them, you'll choose which to use depending of the situation 😉.

Serverless Contracts to the Rescue of your Fullstack Application

Once suspended, danihuerta will not be able to comment or publish posts until their suspension is removed.

Once unsuspended, danihuerta will be able to comment and publish posts again.

Once unpublished, all posts by danihuerta will become hidden and only accessible to themselves.

If danihuerta is not suspended, they can still re-publish their posts from their dashboard.

Once unpublished, this post will become invisible to the public and only accessible to Daniel Huerta.

Thanks for keeping DEV Community 👩‍💻👨‍💻 safe. Here is what you can do to flag danihuerta:

Unflagging danihuerta will restore default visibility to their posts.