The base of the rebase

This what you might have in mind when you think about what is a rebase in git:

You could say that when you rebase you “unplug” the branch you want to rebase, and “replug” it on the tip of another branch. It is not very far from the truth but it worths digging a little deeper. If you look at the doc this is what is written about the rebase:

Not very helpful isn’t it? An approximate translation could be:

git-rebase: Reapply all the commit from your branch to the tip of another branch.

The most important word here is “reapply” because a rebase is not simply a ctrl-x/ctrl-v of a branch to another. A rebase will sequentially take all the commit from the branch you’re in, and reapply them to the destination. This behavior has 2 main implications:

So this could be a more accurate representation of what actually happens during a rebase:

As you can see, the feature branch has completely new commits. As said before, same set of changes, but completely different objects from the git point of view. And you can also see that previous commits are not destroyed. They are simply not directly accessible. If you remember, a branch is only a pointer to a commit. Therefore if neither branches nor tags are pointing to a commit it becomes almost impossible to reach, but the commit still exists.

The golden rule of rebase

“No one shall rebase a shared branch” — Everyone about rebase

You have probably came across that rule, maybe phrased differently. For those who haven’t, this rule is quite simple. Never, NEVER, **NEVER, **rebase a shared branch. By shared branch I mean a branch that exists on the distant repository and that other people on your team could pull.

Too often this rule is thrown as a divine truth and I think understanding it could be a good thing if you want to improve your understanding of git.

To do that, let’s imagine a situation where a dev breaks the rule and see what happens.

Let’s say Bob and Anna are both working on the same project. Here is an overview of both Bob’s, Anna’s repos and the remote on GitHub:

Everybody is sync with the remote (GitHub)

Now Bob, innocently breaks the golden rule of rebase, in the mean time Anna decides to work on the feature and creates a new commit:

Do you see what’s coming ?

Bob tries to push now, he got rejected and receives that kind of message:

Oh My Zsh with agnoster theme for those who cares

Here git is not happy because it doesn’t know how to merge the Bob feature branch with the GitHub feature branch. Usually when you push your branch on the remote, git merges the branch you’re trying to push with the branch currently on the remote. In fact git tries to fast-forward your branch, we’ll talk more about that in a future post. What you have to remember is that the distant repo can’t, in a simple way, handle the rebased branch Bob is trying to push.

One solution for Bob would be to do a git push — force, basically it tells the remote repository:
“Don’t try to merge or do whatever work between what I push and what you already have. Erase your version of the feature branch, what I push is now the new feature branch”
And this is what we end up with:

Had Anna known what’s coming, she wouldn’t have come to work this morning.

Before the pull those are the commits in the distant and local feature branch:

When you pull, git has to do a merge to resolve this issue. And this is what happens:

The commit M represent the merge commit. The commit where Anna’s and GitHub’s feature branch were finally reunited. Anna is finally relieved, she managed to resolve all the merge conflicts and can now push her work. Bob decides to pull, and everyone is now synced.

Looking at the mess should be enough to convince you of the validity of the golden rule. You have to keep in mind that you are in front of a mess created only by one person, on a branch shared by only two. Imagine doing that with a team of 10 peoples. One of the numerous reasons people use git is for being able to easily go back in time, and the more messy you history is the more complex it becomes.

If you’re still not convinced, try to imagine Emma, the third dev. She worked on the feature branch before Bob messed up everything and now wants to push. Note that she pushes after our previous little scenario.

update: As some redditor mentioned it, this post might let you think that rebase can only be used to rebase a branch on the top of another branch. This is not the case, you can rebase on the same branch, but this is another story.

Thank you for reading:

I hope you learn something valuable reading this post and that it will make your use of git easier.

You can read the part 3 here. 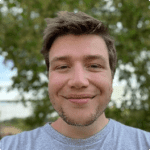 Please tell me in the comments your last Git confusement, don't be shy 🙂 and, if you liked this post, do not forget to subscribe to my newsletter you will also get the first chapter of my next ebook about git for free (coming very soon).

4 Reasons Why Every Developer Should Blog

Pierre
Bootstrapping scrapingbee.com, trying to go big while staying small. Sharing everything along the way. Currently at $1 million ARR with a team of 3.
The journey to a $1 million ARR SaaS without traditional VCs
#startup #saas #beginners
The 25 most recommended JavaScript books of all-time
#javascript #books #webdev #beginners
Web Scraping 101 with Javascript and NodeJS
#javascript #node #webdev #tutorial

Once suspended, daolf will not be able to comment or publish posts until their suspension is removed.

Once unsuspended, daolf will be able to comment and publish posts again.

Once unpublished, all posts by daolf will become hidden and only accessible to themselves.

If daolf is not suspended, they can still re-publish their posts from their dashboard.