If you think it's possible to accomplish great things without going through numerous trials and errors first -- you're wrong. We learn to become better and more efficient through experience, and gaining experience requires you to make multiple attempts, but it also requires you to fail to learn from your mistakes. You'll achieve greatness only once you learn how to handle errors that stand in your way, and when you do, everything becomes crystal clear.

Ever since AWS's Chief Evangelist and Vice President Jeff Barr gave us his stamp of approval for our AWS Step Functions Ultimate Guide, we've decided to continue our mini-series. We'll go even deeper into AWS Step Functions for you to better understand how it all works and on which things to focus your attention.

After explaining Step Function use cases in one of our previous posts, we've realized it's time to go even further with our series. Therefore, today we'll scratch beneath the surface to uncover all the things you need to know about how to assess and handle errors in AWS Step Functions.

Without further ado, let's jump right into it!

The developer's guide to Step Functions states that any state is capable of encountering runtime errors, and these errors can happen for different reasons, including:

AWS Step Functions will cause a complete execution failure by default if a state reports an error.

Assess and Handle the Situation

In the majority of AWS Step Functions states, you can select a Catch section that will allow you to handle occurring errors. What you have to do is notify yourself and your team if anything unexpected happens during the workflow like if the Docker container fails to start, Lambda errors occur, EMR Cluster failure, batch jobs failure, etc. If any of these things happen, your workflow might look like the example below, where for each step, you'll catch errors, and you'll be notified before your entire workflow fails. 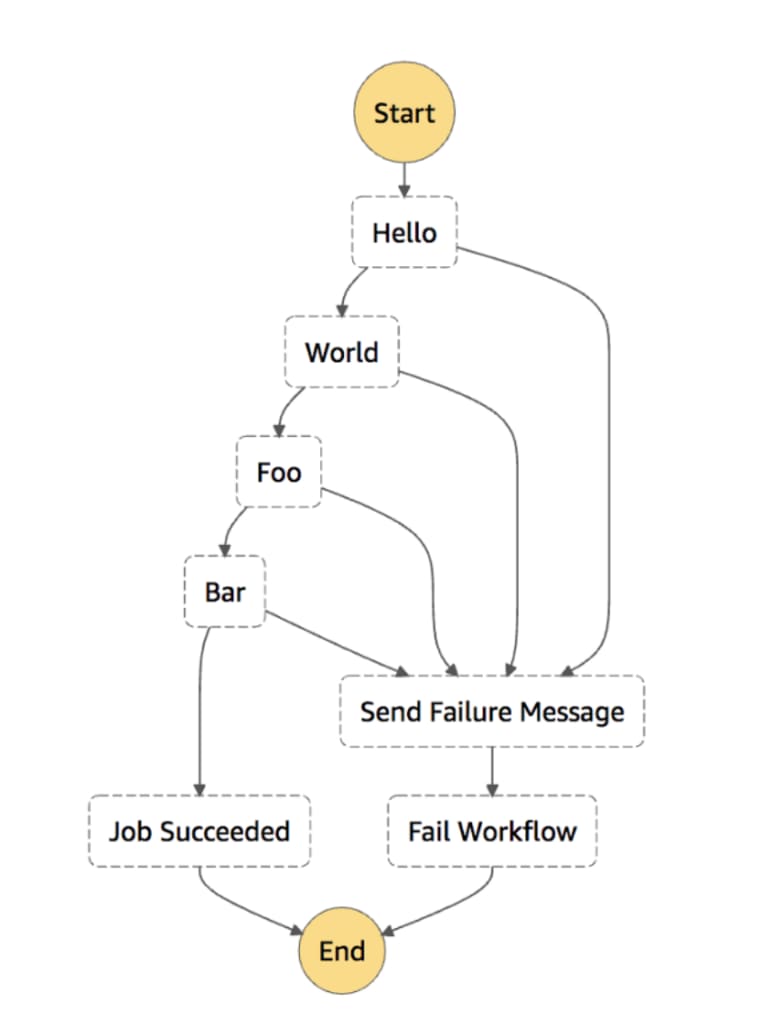 However, as you might've noticed, this gets a bit more horrendous with each step you've applied to this workflow.

This is the Step Function declaration that would get you there: 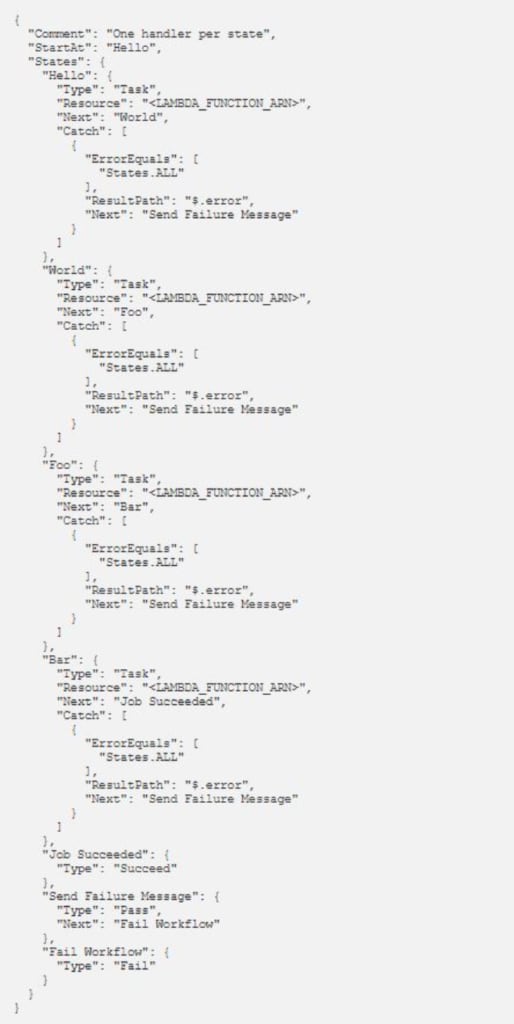 Although it's fantastic in general terms, there's something you need to know. For every additional step you add, you'll also have to add the catch component to it as well. What happens next is that* your already bad-looking workflow becomes even more bloated*.

By restructuring this, you'll have a workflow that requires only one catch. For easier understanding, think of it as an outer exception handler, which you'd normally create within your code, except you'd have to apply the exact same principle to your workflows as well. Its effectiveness would increase once you have more than just a couple of states within your workflow. Therefore, you'll be able to use the power of the Parallel state to achieve the goals you want, and it should look like this: 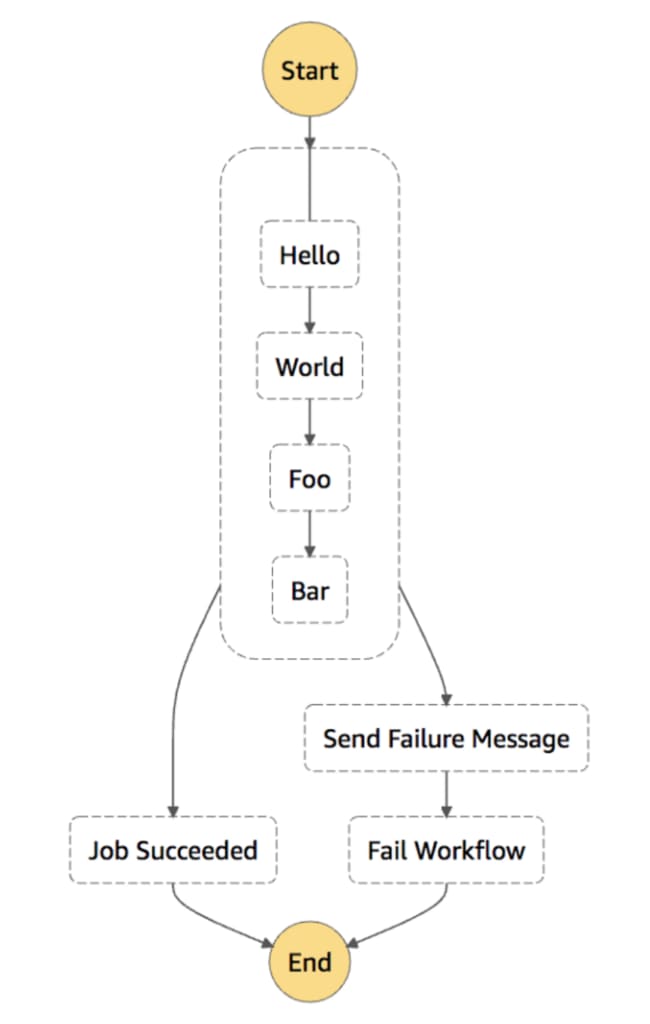 That's a much better Step Function error handling declaration. You'll notice that the states inside are a lot more concise and straightforward to manage, while the diagram is visually much nicer as well. 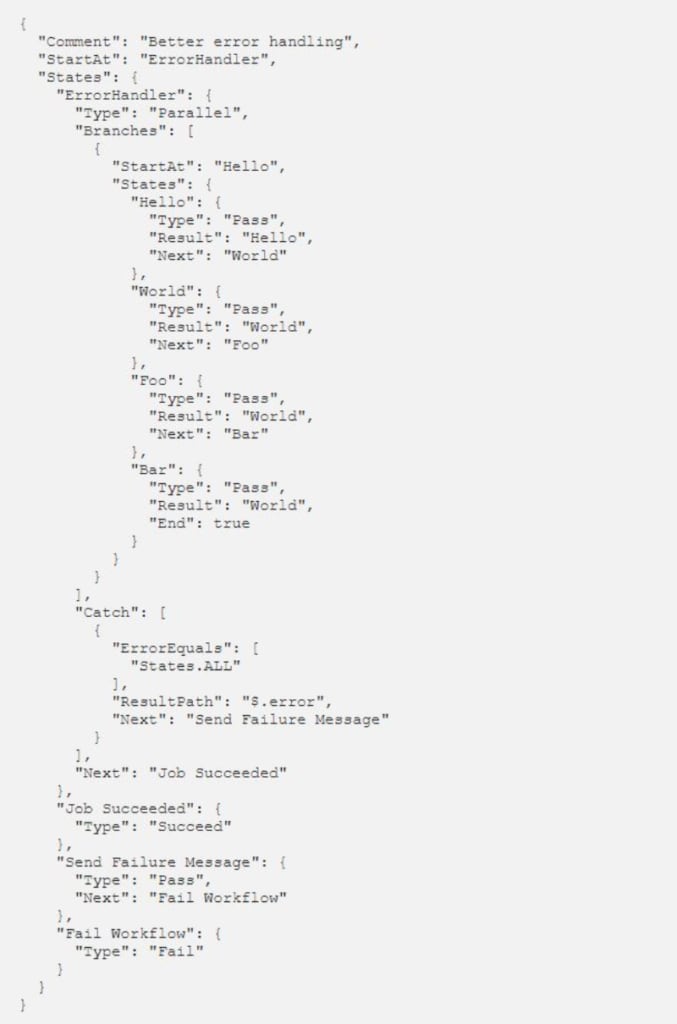 Therefore, you'll avoid having Catch statements all over the place, and you can add new steps in without the need to remember to bind every one of them to the error handling.

Don't forget that you can also monitor and debug your Step Functions (both standard and express workflows) with Dashbird and start receiving Well-Architected insights on how to optimize them even better for cost efficiency and operational excellence.

You can try it out for free by signing up here. 2-minute easy setup, no credit card required, no code changes and you can cancel any time.

3. States.Runtime happens when the execution fails due to an exception that couldn't be processed. Usually, this happens due to runtime errors like attempting to apply OutputPath or InputPath on a null JSON payload. You can't retry this error, and it'll always cause the execution failure. Moreover, a Catch or Retry on States.ALL won't be able to catch States.Runtime errors.

5. States.TaskFailed occurs if a Task state fails during the execution.

6. States.Permissions happen if a Task state fails because it didn't have sufficient privileges to execute the specific code.

States can also report errors with other names, but these can't begin with the "States." prefix.

The best practice is to ensure that the production code is capable of handling AWS Lambda service exceptions (Lambda.SdkClientException and Lambda.ServiceException).

Moreover, all unhandled errors within Lambda are reported as Lambda.Unknown within the error output. These also include function timeouts and out-of-memory errors. To successfully handle these errors, you can match on States.TaskFailed, Lambda.Unknown or States.ALL. But, when Lambda reaches the maximum invocations number, the error that occurs is Lambda.TooManyRequestsException.

Parallel and Task states can contain a Retry field whose value has to be an array of objects better known as Retriers. Every retrier represents a specific number of retries that have increasing time intervals. Additionally, Retriers are solely treated as state transitions, and every retrier has these fields:

The non-empty strings array matches error names. Step Functions will scan through all retriers when a state signifies an error. Also, when the error name is shown in this array, it'll implement the retry policy that's described within this retrier.

This field is an integer that showcases the number of seconds prior to the first retry attempt (it's always one by default).

It's a positive integer showcasing the maximum number of retry attempts (it's three by default). In case the error happens more times than it's specified, retries will stop, and normal error handling will resume. A zero value specifies that a single or even multiple errors have never been retried.

This is the multiplier by which the retry interval will increase during every attempt (two by default).

This Retry example makes two retry attempts after a 3 and 4.5 seconds wait period:

And here's another example of a Retry field that retries any error except for the States.Timeout:

In the example above, you can see that the States.ALL reserved name appears in a retrier's ErrorEquals field, and is a wildcard matching any error name. It has to appear alone within the ErrorEquals array, but it also has to appear in the last retrier within the Retry array.

A retrier's parameters will apply across all retrier visits that are found within a single-state execution.

Take a look at this Task state:

Parallel and Task states can both have a Catch field, and its value has to be an array of objects (catchers). All catchers consist of the following fields:

This field is a non-empty strings array that's matching error names specified precisely as they're set within the retrier field with the same name.

This string has to match the exact state names of the state machine.

It's a path determining what input is sent to the state specified within the Next field.

Step Functions will scan through catchers in the order listed within the array. This will happen whenever an error is reported by the state, and if there's no Retry field, or even if retries don't resolve the error. When the error name shows within the catcher's ErrorEquals value field, the state machine will transition to the state that's been named within the Next field.

The reserved name States.ALL appearing within a catcher's ErrorEquals field is another wildcard matching any error name. It's mandatory that it appears alone within the ErrorEquals array, and it also has to appear within the Catch array's last catcher.

Here's an example of Catch field transitions towards the state called RecoveryState. This example showcases what happens when a Lambda function outputs a Java exception that hasn't been handled. However, if it has been dealt with, the field would transition to the state known as EndState.

It's important to note that every catcher is capable of specifying multiple errors to handle.

Step Functions will transition to a specified state within a catch name, and this usually happens when the object contains the field known as Cause. The Cause field's value is an error description that humans can read, and it's called Error Output.

The example below showcases the first catcher that contains another field -- a ResultPath. It works very similar to a ResultPath field within a state's top-level, and the result is split into two possibilities:

When a state contains both Catch and Retry fields, Step Functions will first use appropriate retriers. Only then will they apply matching catcher transition if the retry policy has failed in resolving the error.

Cause Service Integrations and Payloads

Every string payload can be returned as output by the catcher. Working with service integrations like AWS CodeBuild or Amazon Athena, you may want to consider a conversion of the Cause string and convert it to JSON. This example shows a Pass state with intrinsic functions, but it also explains how to make the Cause string to JSON conversion.

Another Lambda function definition is the one that always fails, and it returns the error message. This one is known as the FailFunction.

Use Retry to Handle a Failure

State machines using a Retry field for retrying failed functions and outputs are called HandledError. The function will be retried twice, while it has an exponential backoff between these retries.

Another variant shown in the example below uses an error code States.TaskFailed that's been predefined, and it matches any error caused by Lambda function outputs.

Use Catch to Handle a Failure

In this example, you'll see how the Catch field is used. Upon error output from the Lambda function, the error is found, and the state machine will then transition to a fallback state.

States.TaskFailed is a predefined error code for this variant, and it matches any error output from the Lambda function.

Use Retry to Handle a Timeout

Retry field is utilized by this state machine to retry any function that times out. This function will be retried twice, while it has an exponential backoff between these retries.

Use Catch to Handle a Timeout

You'll see in the example below how the Catch field is used. Basically, you'll notice that when a timeout happens, the state machine will transition to a fallback state.

It's worth mentioning that it's possible to preserve the error and the state input by utilizing ResultPath.

Having excellent error handling is entirely possible. It'll catch all errors found in your workflow, but it also doesn't require too much muscle power to implement. Now that you're familiarized with how error handling works, you're one step closer to mastering AWS Step Functions, but be aware -- our mini-series isn't over yet!

Be effective with Bitrise CI for Android — the lessons I learned the hard way.