Pokemon games have a very familiar cycle. You start with one of 3
Pokemon. You adventure out with your new buddy, facing tougher and
tougher Pokemon, in greater variety. Many of your Pokemon evolve over
time, and eventually you find the end-game legendaries in a climactic
battle of titans!

You can even see this story in the data. Here is the base_experience
of all the Pokemon, identified by game generation. The base_experience
is the basic amount of experience that is gained by the winner of a
battle from a specific species. e.g. If you beat a Bulbasaur, your
Pokemon gains experience based on a formula which uses Bulbasaurs
base_experience. Because of that we can see it as a proxy value for
how powerful a Pokemon is. If it’s more powerful, it will be harder to
beat, and so reward you with more experience when you win. 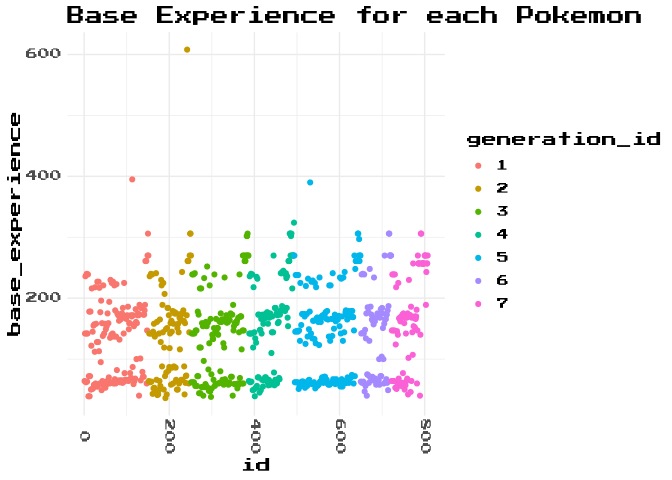 In each generation you can see a few attributes:

Lets see if we can group each Pokemon into a power_level. A
categorical grouping which relates it to other Pokemon with similar
base_experience

Maybe we can explicitly describe the power levels of each tier of
Pokemon with a simple process? Can we group each Pokemon by evolutionary
chain, and then count each Pokemons order within the group? 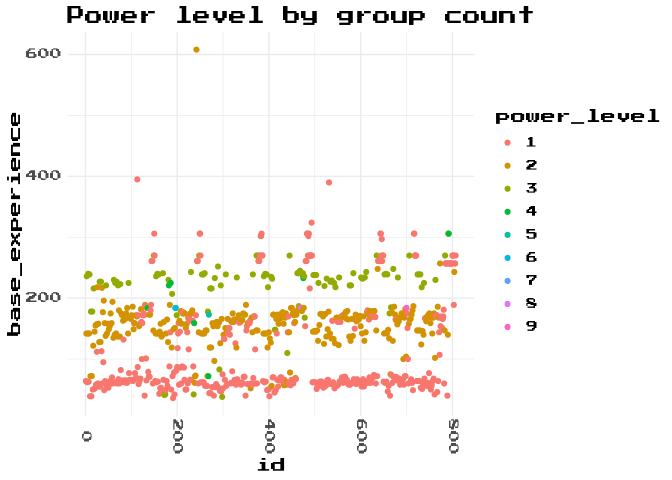 Sort of? Generally we capture the pattern, but we don’t actually get it
very right. First off, there are more than 3 evolutionary tiers in our
engineered feature. We can also see there are some Pokemon are
classified as a power_level higher than 1, but still in the lowest
group on this list. Why might have caused this?

So there are some clear problems with this approach. In Gen 1 we had
some branching evolution with the Eevee family. Not only was this family
expanded in multiple generations to eventually 8 variations, but we also
saw more branching evolution trees as well. We also got ‘baby’ Pokemon.
Pokemon that are actually pre-cursors to other Pokemon, but are listed
later in the Pokedex.

Luckily there is another variable we can use, that should be a whole lot
better.

Each Pokemon that evolves from another Pokemon has the Pokemon they
evolve froms id as the value in the evolves_from_species_id
variable. Maybe we can use that to break up the Pokemon into their
‘power levels’.

The following code is not my best work, however I spent some time on a
more recursive strategy, but it was honestly miles more confusing. For
the purposes of a silly example for a blog, I think this is
prefferable. 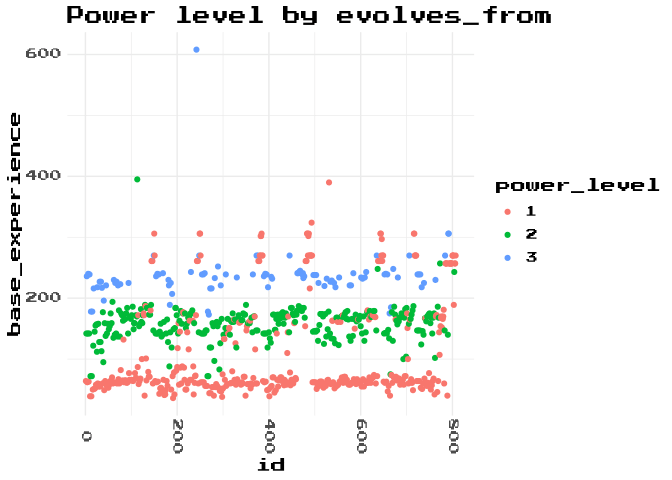 Hmm, that’s actually worse? Lets focus on the Pokemon labelled
power_level 1, but are up where we would expect level 3 Pokemon to be.

So these Pokemon are nearly all ‘Legendary’. They are big end-game
Pokemon, with real rarity in game. They also don’t evolve from, or to,
anything, so our rule doesn’t classify them effectively.

These Pokemon are not end game, but they either have very short
evolution trees (2 Pokemon long), or no evolution tree at all.

So our ‘group count’ process doesn’t work well, and neither does our
‘evolves_from_species’ process. We’re going to have to to learn some
new moves.

Clustering is the process of using machine learning to derive a
categorical variable from data. The simplest form of clustering that
seems relevant to our problem is k-means. Seeing as we have a pretty
good intuition that 3 groups implicitly exist in this data, and a
clear visualisation supporting us, lets cut straight to asking R for 3
groups. k-means clustering aims to divide the data into a known number
of groups which is set in the centers argument, and doesn’t require
any data to be fed to it as examples of what makes up a ‘group’. That
sentence might be a little confusing, as we do obviously give it some
data. What we don’t give it is a training data set which has examples
of what Pokemon are supposed to be in a given group, labelled with the
group they are supposed to be in, e.g. Squirtle is in group 1, Wartortle
is in group 2, Blastoise is in group 3, and then give it unlabelled data
to classify, e.g. “What group is Charmeleon in?”. k-means will figure
out how to split the continuous variable base_experience into 3
groups.

First, we set centroids to be at random positions in the data. To make
sure this doesn’t effect consistency in my article I’ve used set.seed
so k-means starts looking for the centres of our clusters from the same
position each time. A ‘centroid’ can be seen as a ‘centre point’ for
each cluster. We have the same number of centroids set as the value set
in the centers argument. Each data point is then assigned to it’s
closest centroid.

The Sum of Squared Errors (SSE) from the centroids is then used as an
objective function towards a local minimum.

This is the core concept of how k-means calculates a solution. The Sum
of Squared Errors are calculated like this:

What this means is for each group, the distance from the centroid to
each observation is measured, and then squared. Then each of those
squared distances, one per observation in the group, is totalled.

The centroid is then moved to the average value of it’s group. Because
the centroids are now no longer in the same position as when the SSE was
calculated, the SSE is now recalculated for all observations, to each of
the new centroid positions. This means that some observations are now
closer to a different centroid, and so get assigned to a different
cluster.

Then the centroids are moved again to the new average of the new
cluster. Each cluster then gets new distances calculated. This will go
on until termination when, each centroid is in the average position of
the cluster, and each observation in the cluster is closest to the
centroid it is currently assigned to.

That’s a slightly wordy description of a complicated process. I
recommend that you have a look at the k-means explanation in tidy
models to really
cement the concept. It also contains the most adorable animation of a
statistical concept in existance.

Here, I’ve simply selected the one column of data, base_experience,
and piped it into kmeans, which is part of base R. This returns a
super un-tidy list like object of class "kmeans", however, with
tidymodels we can easily make it usable.

augment helps us to match the output of the kmeans function back to
our data for easier processing. The output of kmeans doesn’t actually
contain any of the other information about our data, it only got given
one column remember? augment goes through the return of kmeans,
finds the relevant bit, and matches it neatly back to our original data
ready for plotting in one step! 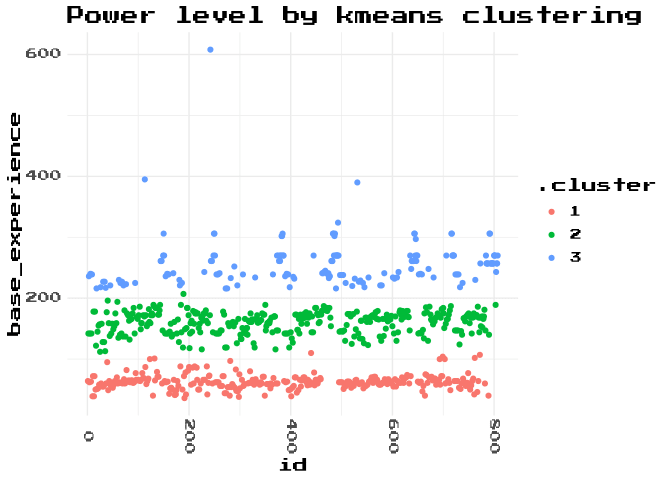 This is a lot better. It gives us really clear groups, in exactly
where we expected them. It’s also tonnes simpler code!

Lets check some of our boundary positions, just to make sure it makes
sense.

Ditto and Type: Null are just a plain weird Pokemon due to their
abilities messing with their type. Happiny is a baby type, but from a
family with an insane base_experience. Jumpluff is an awkward edge
case. Technically the 3rd evolution, it’s still got an extremely low
base_experience. Potentially this is for game balancing as they are
relatively regularly encountered? Aurorus and Steenee I do not have a
good hypothesis for.

Generally I think that this is a pretty good solution. There are maybe a
few edge cases that are open to interpretation, but that’s just what we
get sometimes with machine learning. Lacking a labelled training data
set, we can’t compute a confusion matrix or ROC-curve.

We’ve found a situation in the ‘real’ world where we know from context
there is a categorical relationship, but from the data available it’s
not possible to classify that precisely. However we can create this
categorisation using machine learning! Even better, we can use the
tidymodels package to help us do it quickly and cleanly.

How to Create Bubble Maps in JavaScript

Dave Parr
Data-scientist who loves to use #datascienceforgood, especially in ecology, energy and the environment. Bonsai, gardening, bikes and music when I'm not at a keyboard.
My GitHub profile shows my popular dev.to posts and GitHub repos automatically
#github #rstats #showdev #r
The Missingno Experiment and Multiple Form Pokemon
#rstats #datascience #pokemon
Why did I make this dev.to API wrapper?
#showdev #projectbenatar #meta #rstats