I wrote a form library once.

It was called React Redux Form, and using Redux for forms was a good idea, at the time (don't use it). In fact, my library was written as a response to Redux Form, and both libraries soon discovered that the idea of using a single global store to store all of your application state is a really, really bad idea.

When all of your forms live in one single store, state is easy to manage at first. And then, every single keypress starts to lag. It's a terrible user experience.

So what do you do?

In short, you go into panic mode and try to contain the spread of the global updates affecting every single connected component, even if those components don't need to rerender.

Some of you have gotten really good at solving this, and have become expert "selector, caching, and memoization" developers. That's fantastic.

But let's examine if those tactics should even be necessary. What if all state wasn't global?

@BenLesh I don’t like Redux very much, but this sounds like the opposite of its problems? With Redux, you *do* know deterministically where the code lies because you can follow the reducer chain. The problem is that what should’ve been local often becomes global.

The first of Redux's three principles is that there is essentially a single source of truth for your whole application state:

The state of your whole application is stored in an object tree within a single store.

The primary reason for this is that it makes many things easier, such as sharing data, rehydrating state, "time-travel debugging", etc. But it suffers from a fundamental disconnect: there is no such thing as a single source of truth in any non-trivial application. All applications, even front-end apps, are distributed at some level:

Even frontend is a distributed systems problem. It always has been, actually (cc @wycats).

And, in a contradictory way, even the Redux Style Guide advises against putting the entire state of your application in a single store:

[...] Instead, there should be a single place to find all values that you consider to be global and app-wide. Values that are "local" should generally be kept in the nearest UI component instead.

Whenever something is done for the sole purpose of making something easy, it almost always makes some other use-case more difficult. Redux and its single-source-of-truth is no exception, as there are many problems that arise from fighting against the nature of front-end apps being "distributed" instead of an idealistic atomic, global unit:

This is "solved" by using combineReducers.

This is "solved" by more complex, custom reducers that orchestrate events through these otherwise separate reducers.

This is "solved" by using selectors, and perhaps by using another library like reselect for memoized selectors.

I put "solved" in quotes because these are all solutions that are all but necessary due to problems that are caused solely by using a global, atomic store. In short, having a single global store is unrealistic, even for apps that are already using global stores. Whenever you use a 3rd-party component, or local state, or local storage, or query parameters, or a router, etc., you have already shattered the illusion of a single global store. App data is always distributed at some level, so the natural solution should be to embrace the distribution (by using local state) rather than fighting against it just for the sake of making some use-cases easier to develop in the short run.

So how can we address this global state problem? To answer that, we need to go back in time a little bit and take some inspiration from another old, well-established model: the actor model.

The actor model is a surprisingly simple model that can be extended slightly beyond its original purpose (concurrent computation). In short, an actor is an entity that can do three things:

If you thought "hmm... so a Redux store is sort of an actor", congratulations, you already have a basic grasp of the model! A Redux store, which is based on some single combined-reducer thing:

It also can't really spawn other "actors", which makes the Reddit example in the official Redux advanced tutorial more awkward than it needs to be:

Let's dissect what is happening here:

In other words, there is no way we can dispatch or forward an event directly to a specific "entity" (or actor); we only have a single actor and have to manually update only the relevant part of it. Also, every other reducer in combineReducers(...) will get the entity-specific event, and even if they don't update, every single one of them will still be called for every single event. There's no easy way to optimize that. A function that isn't called is still much more optimal than a function that is called and ultimately does nothing (i.e., returns the same state), which happens most of the time in Redux.

So how do reducers and actors fit together? Simply put, a reducer describes the behavior of an individual actor:

This isn't a cutting-edge, groundbreaking model; in fact, you've probably been using the actor model (to some extent) without even knowing it! Consider a simple input component:

This component, in an implicit way, is sort of like an actor!

Again, one of Redux's three main principles is that Redux exists in a single, global, atomic source of truth. All of the events are routed through that store, and the single huge state object is updated and permeates through all connected components, which use their selectors and memoization and other tricks to ensure that they are only updated when they need to be, especially when dealing with excessive, irrelevant state updates.

And using a single global store has worked pretty well when using Redux, right? Well... not exactly, to the point that there are entire libraries dedicated to providing the ability to use Redux on a more distributed level, e.g., for component state and encapsulation. It is possible to use Redux at a local component level, but that was not its main purpose, and the official react-redux integration does not naturally provide that ability.

There are other libraries that embrace the idea of "state locality", such as MobX and XState. For React specifically, there is Recoil for "distributed" state and the built-in useReducer hook that feels a lot like a local Redux, specifically for your component. For declarative effects, I created useEffectReducer which looks and feels just like useReducer, but also gives you a way to manage effects.

For state that needs to be shared (not globally), you can use a pattern that is very similar to what React-Redux already uses, by making an object that can be subscribed to (i.e., "listened" to) and passed down through context: 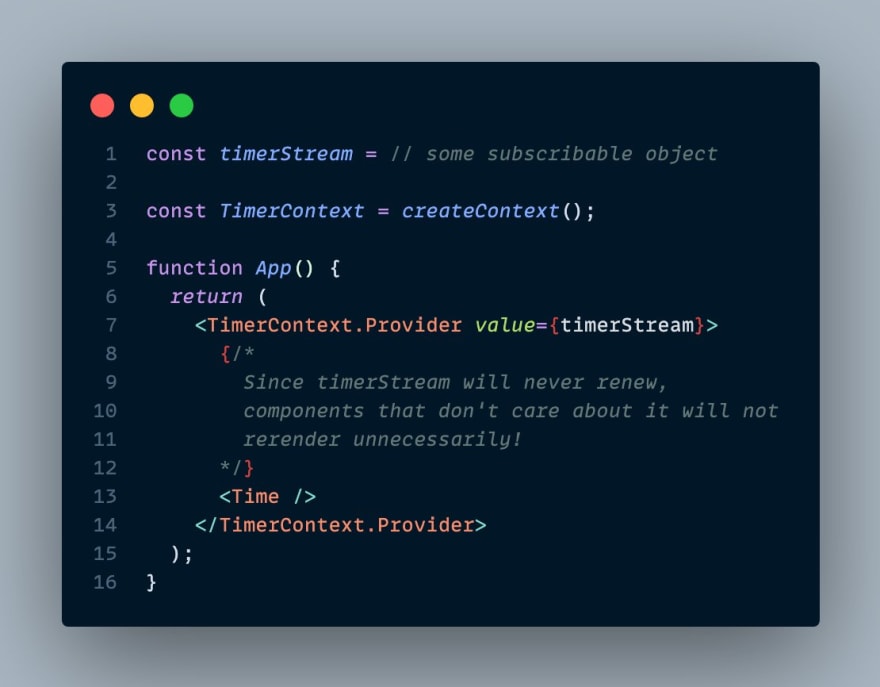 ⚛️ React tip: you can pass *anything* into context, including "subscribable" objects (like RxJS observables, etc.)!

This means that you can share & subscribe to streams of values that change frequently, without causing unnecessary rerenders.

That will give you the best performance, as that "subscribable" object will seldom/never change. If that feels a bit boilerplatey for you and performance is not a huge concern, you can combine useContext and useReducer with not too much effort:

And then use it in your components:

Not too bad, right? In general, this is not a problem that can be solved in Redux without going against-the-grain, since Redux is fundamentally a single, atomic global store.

What do others think?

I ran a non-scientific poll on Twitter to see where most app state lives, and how developers feel about it:

Question for all app developers (any framework, any language):

Where is the majority of your app state, and how do you feel about it? (And why?)

From this, I gather two things:

What do you think? Share your thoughts in the comments!

Thinking in terms of "actors", in which your application is organized by lots of smaller actors that all talk to each other by passing messages/events to each other, can encourage separation of concerns and make you think differently about how state should be localized (distributed) and connected. My goal for this post is to help you realize that not all state needs to be global, and that other patterns (such as the Actor Model) exist for modeling distributed state and communication flow.

The Actor Model is not a panacea, though. If you're not careful, you can end up having a spaghetti-like state management problem, where you have completely lost track of which actor is talking to another actor. Anti-patterns are present in any solution that you choose, so it helps to research best practices and actually model your app before you start coding.

If you want to learn more about the Actor Model, check out The Actor Model in 10 Minutes by Brian Storti, or any of these videos:

Please keep in mind that this is post reflects my opinions based on what I've researched, and is in no way meant to be authoritative on the way you should do things. I want to make you think, and I hope that this post accomplished that goal. Thanks for reading!

If you enjoyed this post (or even if you didn't and just want to hear more of my state management ramblings), subscribe to the Stately Newsletter for more content, thoughts, and discussion 📬

Due to the current situation, it is recommended to avoid putting all state in a single, global state store and isolate your state locally instead, to prevent the spread of bugs. 🐞

How to configure ESLint, Prettier, Husky, Lint-staged into a React project with TypeScript and Tailwind CSS

React Tricks Miniseries 1: How to set up your react folder structure