Phabricator is SO COOL y'all. I gotta tell you about it.

Until this week the only collaborative toolset I'd ever used is what's built in to GitHub. Which, to be sure, is pretty cool. Once your projects get to a certain size, Issues and Milestones are a much better way to organize than //TODO comments.

Phabricator is a whole other step up, though. Originally created internally to coordinate software development at Facebook, the project maintainer Evan Priestly eventually left his post to create the Phallacity company and work on Phabricator phull-time.

Phabricator isn't just GitHub Projects. It's a suite of interconnected tools. I'm sure it's one of many and most of you probably use a similar integrated solution at work, but this one is my first, and I like it a lot.

It integrates with Git, and if you're familiar with a GitHub Pull Request the analog is a Differential Revision: 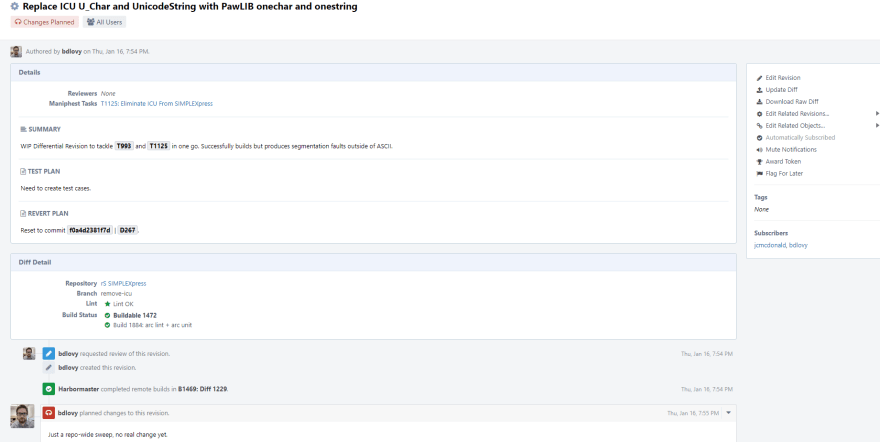 Everything is on one page, making it easy to navigate through this revision's history and see all changes throughout the repository:

This project has integrated with Jenkins for a completely automated CI/CD pipeline.

Maniphest is for working on the Task level - more or less analogous to a GitHub Issue. 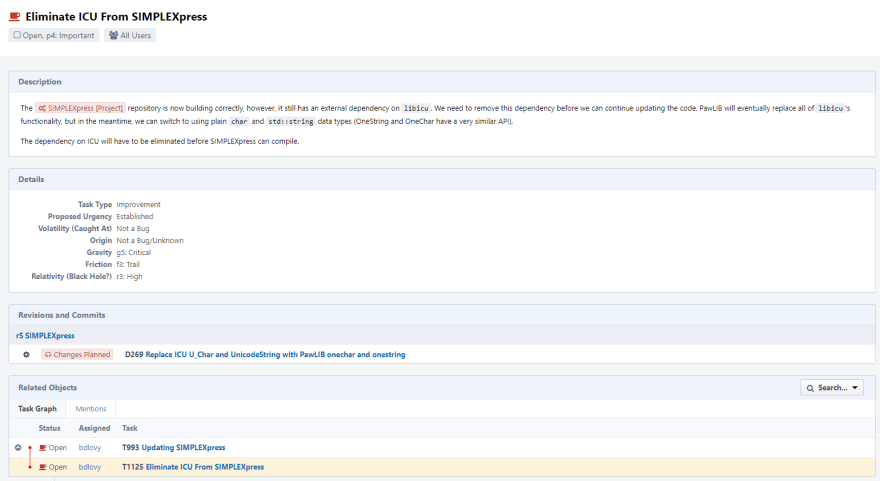 You can associate subtasks and parent tasks, as well as specific Differential Revisions.

Phabricator is super customizable. Here's a customized "Task Finder" Dashboard that @codemouse92 created for this instance: 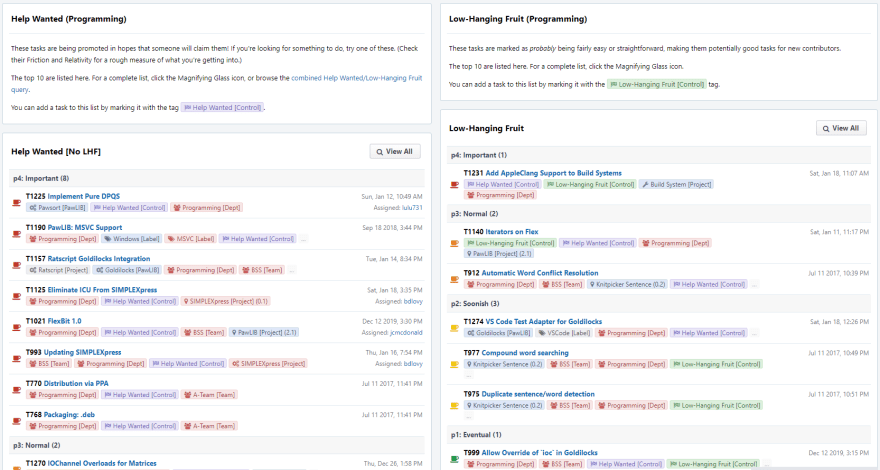 By correctly leveraging project and help wanted tags, you can easily guide would-be contributors towards easy entry points in the code.

Herald is a rules engine, letting you script logic into many parts of the site. It can automatically add project tags to new Differential Revisions, or add subscribers, or reject commits from team members without the requisite project affiliations - and much more. I haven't used it yet, as it's already configured for this instance, but there's clearly a lot of power there.

Phriction is the built-in wiki. 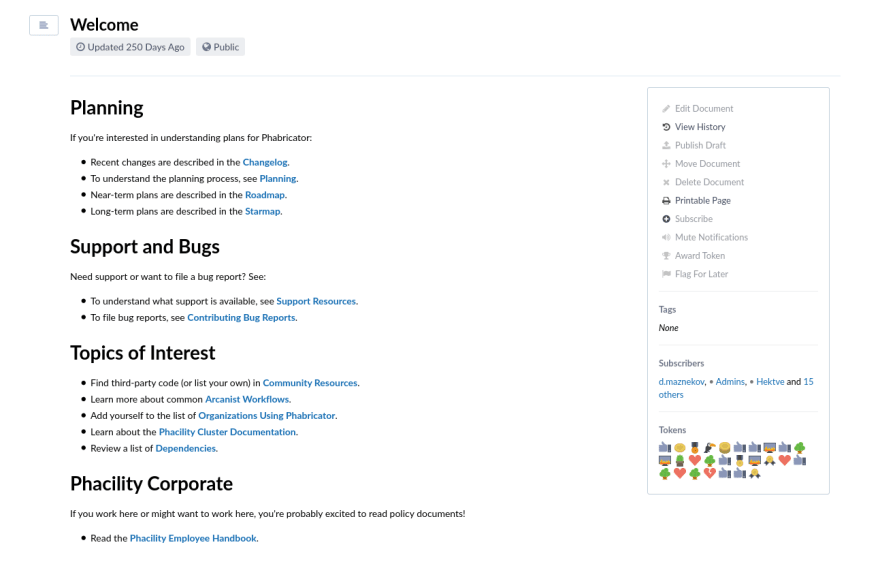 Yup. It's a wiki. No surprises there, but useful to have integrated.

This is a way to organize your Maniphest tasks. There's a Kanban-style Workboard: 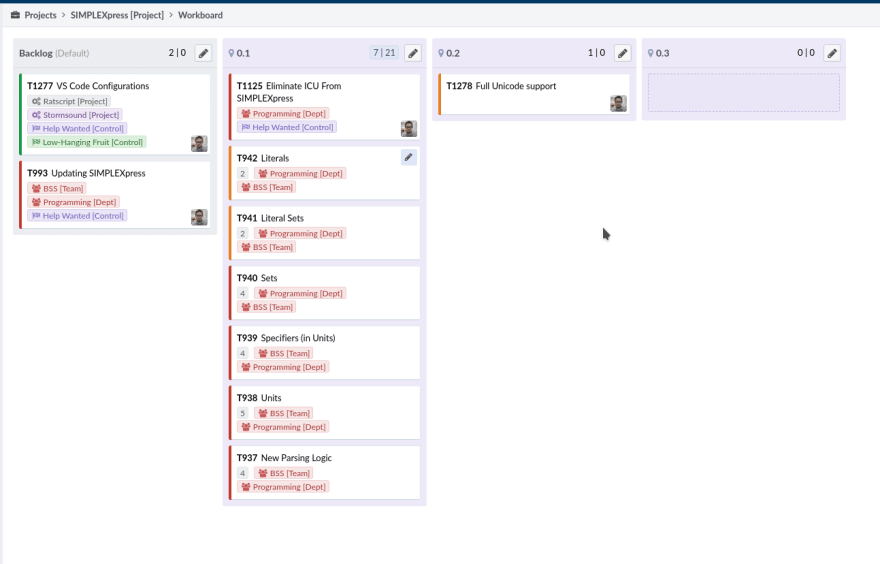 Ponder is a space for open-ended, general discussion that isn't specifically tied to any particular Task or Differential Revision.

Of course, these are Phabricator objects as well.

There's even a built-in URL shortener:

In addition to the above sections, there are also dedicated spaces to upload static assets like images and fonts, and a place to publish blog posts - all of course generating hyperlinkable Phabricator objects!

Hyper-linked to the MAX

This is the best part. Every single thing gets a unique identifier. A Differential Revision might get D238, a Task might be T1235, the chatrooms are Z23, users are @bdlovy, et cetera.

What's great is that the moment one of these tags is mentioned anywhere it gets hyperlinked in both places. Every Phabricator object ID gets surrounded by a grey box:

That grey box is a link to the object in question - which now has a link right back:

The built-in chat widget is a Phabricator object too, so if you ask for help in a chatroom for a specific task, and you'll get a link just like that on the task page to the specific point of the chatroom logs.

Of course, these object IDs are searchable as well:

Phabricator has a command-line tool that exposes nearly all webapp functionality at the command line. I've so far just used it for creating a new Differential Revision. Once you've made your changes in your separate branch, you can git commit and then run arc diff.

You can use the above tags here, too, though! When you commit with arc diff, your $EDITOR will open and let you write up the Differential Revision sections:

Edit it, save it, boom. Automatically, any configured linters and E2E tests get run, your CI/CD is engaged, and you get a link to the created Differential Revision link to your CLI. At the same time, the Phabricator pages for each of T1225, commit f928ybrv9q48th, and Differential Revision D291 have been updated themselves to include a link to the new revision you just created, just because you mentioned it. Also, any mentioned reviewers and subscribers are notified.

When you host a Phabricator mirror in GitHub, you get this whole message. Phabricator: 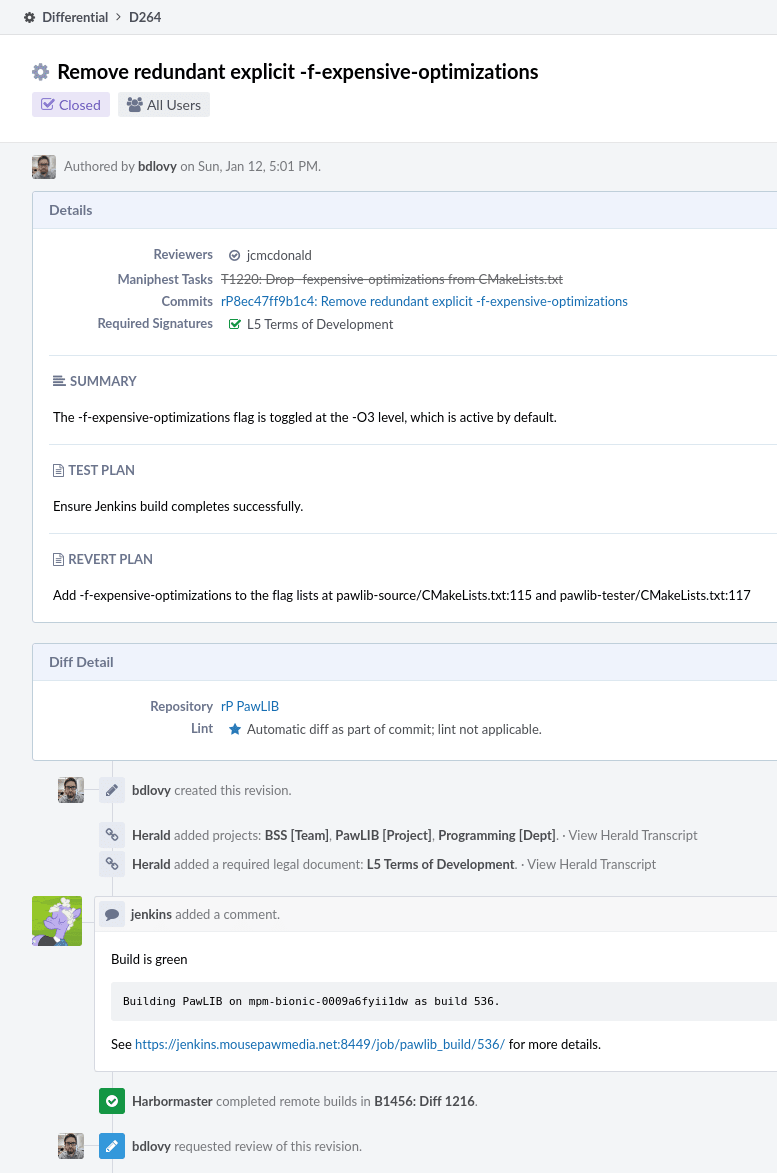 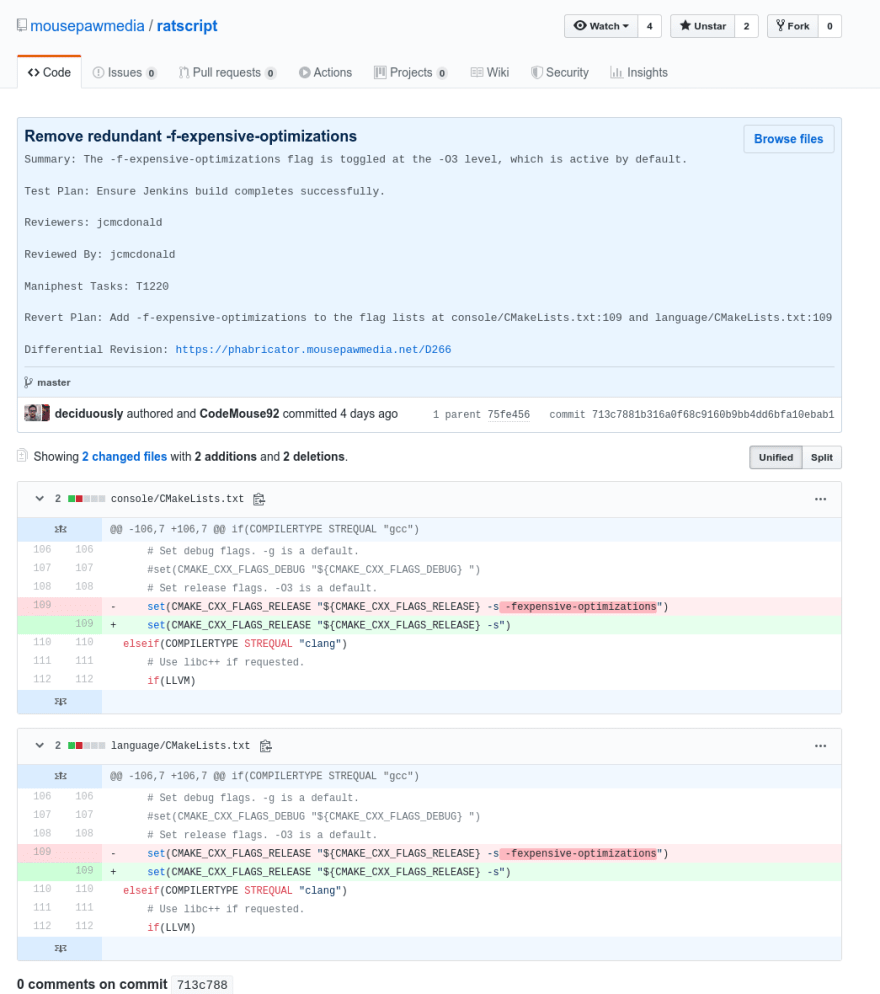 If you've been paying attention, you've noticed several of these tools have a phunky ph in 'em. Yep, this tool is implemented in PHP - like it or not, it's a staple. It might not have "sex appeal" anymore, whatever the heck that means, but it's hard to deny that it's more than capable of getting the job done however complex that job may be.

Phabricator is phree! That's right, it's some Pretty Handy Open-Source Software. It's also completely free of charge. The source is on GitHub (and Phabricator) and you can run it on your own hardware as-is. They do offer hosted instances and enterprise support, but there's nothing stopping you from spinning up a personal-use instance right now (except perhaps ISP conditions).

I've had a blast getting familiar with this tool - it blows GitHub out of the water in terms of utility. Each individual part isn't necessarily novel or groundbreaking, but each does work incredibly seamlessly. To me, though, the real boon here is the interconnectedness. The automatic hyperlinking between Phabricator objects is simple, intuitive, and you never need to worry about it. I feel I'm already spoiled.

All that said, it's also my first time using a tool like this beyond GitHub - what else ya got for me?

Photo by Ant Rozetsky on Unsplash

A Guide to the Zsh Line Editor with Examples