Static code analysis refers to the technique of approximating the runtime behaviour of a program. In other words, it is the process of predicting the output of a program without actually executing it.

Lately, however, the term "Static Code Analysis" is more commonly used to refer to one of the applications of this technique rather than the technique itself — program comprehension — understanding the program and detecting issues in it (anything from syntax errors to type mismatches, performance hogs likely bugs, security loopholes, etc.). This is the usage we'd be referring to throughout this post.

"The refinement of techniques for the prompt discovery of error serves as well as any other as a hallmark of what we mean by science."

We cover a lot of ground in this post. The aim is to build an understanding of static code analysis and to equip you with the basic theory, and the right tools so that you can write analyzers on your own.

We start our journey with laying down the essential parts of the pipeline which a compiler follows to understand what a piece of code does. We learn where to tap points in this pipeline to plug in our analyzers and extract meaningful information. In the latter half, we get our feet wet, and write four such static analyzers, completely from scratch, in Python.

Note that although the ideas here are discussed in light of Python, static code analyzers across all programming languages are carved out along similar lines. We chose Python because of the availability of an easy to use ast module, and wide adoption of the language itself.

How does it all work?

Before a computer can finally "understand" and execute a piece of code, it goes through a series of complicated transformations: 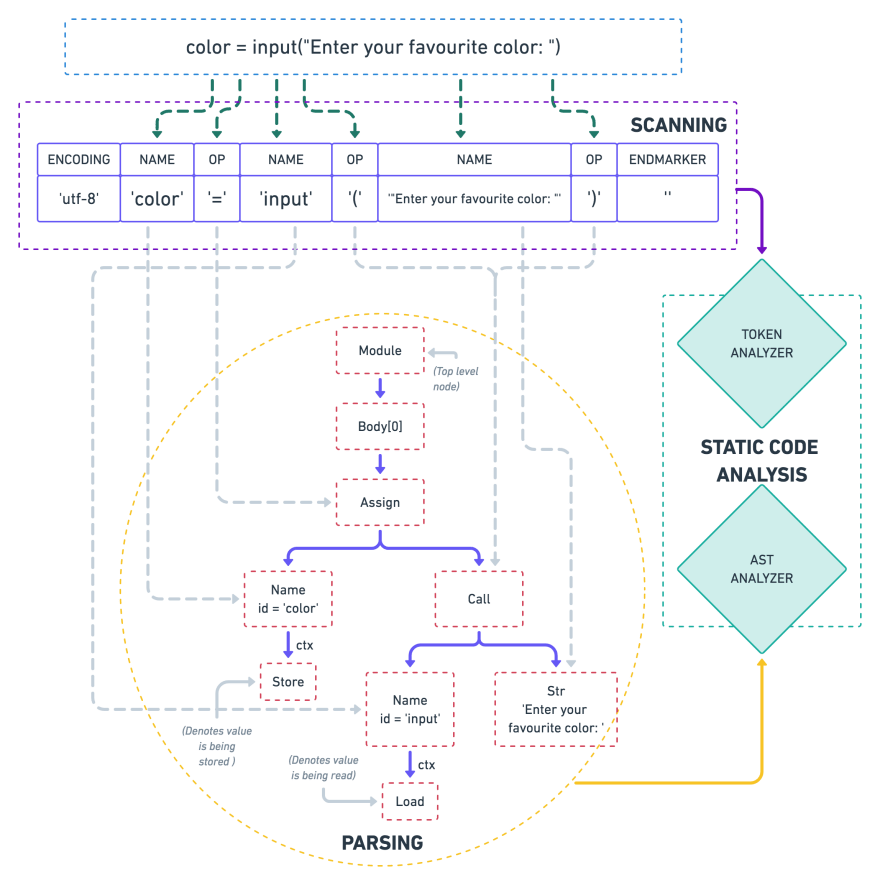 The first thing that a compiler does when trying to understand a piece of code is to break it down into smaller chunks, also known as tokens. Tokens are akin to what words are in a language.

A token might consist of either a single character, like (, or literals (like integers, strings, e.g., 7, Bob, etc.), or reserved keywords of that language (e.g, def in Python). Characters which do not contribute towards the semantics of a program, like trailing whitespace, comments, etc. are often discarded by the scanner.

Python provides the tokenize module in its standard library to let you play around with tokens:

(Note that for the sake of readability, I've omitted a few columns from the result above — metadata like starting index, ending index, a copy of the line on which a token occurs, etc.)

At this stage, we only have the vocabulary of the language, but the tokens by themselves don't reflect anything about the grammar of the language. This is where the parser comes into play.

A parser takes these tokens, validates that the sequence in which they appear conforms to the grammar, and organizes them in a tree-like structure, representing a high-level structure of the program. It's aptly called an Abstract Syntax Tree (AST).

"Abstract" because it abstracts away low-level insignificant details like parenthesis, indentation, etc, allowing the user to focus only on the logical structure of the program — which is what makes it the most suitable choice for conducting static analysis onto.

A syntax tree can get quite vast and complex, thus making it is difficult to write code for analyzing it. Thankfully, since this is something that all compilers (or interpreters) do themselves, some tooling to simplify this process generally exists.

Python ships with an ast module as a part of its standard library which we'd be using heavily while writing the analyzers later.

If you don't have prior experience of working with ASTs, here's how the ast module works:

Just to give you a sense of how this works, let's write code for visiting all for loops:

But, in this post, we'll confine ourselves to the barebones ast module so that we get to see the real, ugly operations behind the scenes.

Although this blog post is only an introduction to static code analysis, we'd be writing scripts to detect issues which are highly relevant in real-world scenarios as well (chances are, that your IDE already warns you if you violate one). This shows just how powerful static code analysis is, and what it enables you to do with so little code:

Here are how the examples would work:

Here, we write a script which would raise a warning whenever it detects that single quotes have been used in the Python files given as input.

This example may be considered rudimentary compared to other modern-day static code analysis techniques, but it is still included here because of historical significance — this was pretty much how early code analyzers worked1. Another reason, it makes sense to include this technique here is that it is heavily used by many popular static tools, like black.

Here's a breakdown of what is happening:

Note that for the sake of brevity, error-handling has been omitted entirely from these examples, but needless to say, they are an essential part of any production system.

The previous example was the only example where we were working directly with tokens. For all others, we'd limit our interaction to the generated ASTs only.

Since a lot of code would be duplicated across these checkers, and this post is already so long, let's first get some boilerplate code in place, which we can later reuse for all examples. Defining boilerplate code at once also allows me to discuss only relevant details under each checker and get away with all the business logic at once:

Most of the code works the same way as we saw in the previous example, except that:

You might notice that there are a couple of unused imports — they'd be used later on. Also, the placeholder <CHECKER_NAME> needs to be replaced with the actual name of the checker class when running the code.

For the entire ready-to-run code for all checkers in this post, see this GitHub Gist

It is advised to use an empty literal [] instead of list() for an empty list because it tends to be slower — the name list must be looked up in the global scope before calling it. Also, it might result into a bug in case the name list is rebound to another object.

list() resides as an ast.Call node. Thus, we start with defining the visit_Call method for our new ListDefinitionChecker class:

Running this file on some example code (ensure that you have updated the <CHECKER_NAME> in the boilerplate to ListDefinitionChecker):

Detecting too many nested for loops

"For loops" which are nested for more than 3 levels are unpleasant to look at, difficult for the brain to comprehend with, and a headache to maintain at the very least.

Thusly, let's write a check to detect whenever more than 3 levels of nested for loops are encountered.

Here's what we'd do: We begin counting as soon as an ast.For node is encountered. We also mark this node as a 'parent' node. We, then check if any of its children are also ast.For nodes. If yes, we increment the count and repeat the same procedure for the child node again.

The workflow might look a little skewed at first, but here's basically what we're doing:

Let's run our script on some examples:

Did you notice the caveat here? If the nested for loop is not a direct child of the parent loop, it is never visited, and hence not reported. However, getting our code to work on that edge case is nuanced, and is out of scope for this post.

Detecting unused imports is different from the previous cases because we can't flag the violations immediately while visiting nodes — we don't have the complete information about what all 'names' are gonna be used in the entire module. Therefore, we implement this analyzer in two passes:

Let's go ahead and run this script on a few examples:

Please note that for the sake of brevity, I went with the simplest version of the code possible. This choice has a side effect that our code doesn't handle some tricky corner cases (e.g., when imports are aliased - import foo as bar, or when the name is read from the locals() dict, etc.).

Phew! This was a whole list of things to wrap your head around with. But, our reward is that the next time we identify a pattern of bug-causing-code, we can go right ahead and write a script to automatically detect it.

How to Add Assets in Development Mode in Flutter?

Once unpublished, this post will become invisible to the public and only accessible to Rahul Jha.