Note: You can read this article in spanish

After a lot of —s t r u g g l e— trying to understand how all these dev tools work together in order to debug my first React Native Application I got so stressed for not being able to just get to know what was in my Redux Tree that I decided to document the solution that worked for me.

— After all it wasn't that complicated, it's just that the docs weren't clear enough for me... and you know when you just go nuts with something simple? Well... —

In this blog I'm going to show you how to debug a React Native application using the Chrome Extension: Redux DevTools Extension.

Assuming that you already have your React Native project set up with Redux and a middleware (i.e thunk). (I mean, installed as dev dependencies and your Redux store already setup);

We are going to install the following dependencies:

Once finished installing the dependencies mentioned above we’ll take a look at the JavaScript file where we configure our redux store. Commonly named as configureStore.js or store.js.

If you setup your store with middeware and enhancers like redux-thunk, or similar: Let's use the composeWithDevTools export from redux-devtools-extension, and our store would look more or less like this:

If you are not using middleware and/or enhancers then your store should look like this:

There are two ways of accessing the React Native Debugger and they both are kinda the same, it’s just matter of preference:

By now your package.json should look something like this:

And then in your app root directory run the following command:

This should open the React Native Debugger window. 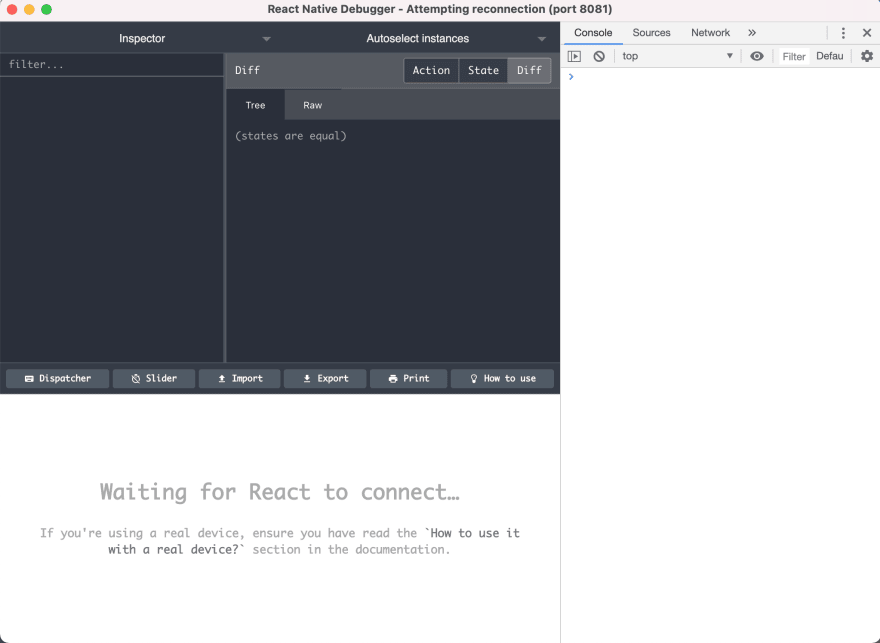 Once launched the React Native Debugger head over to your project in your text editor and launch your app in the device simulator (in my case npm run ios or npm run android). Once the app opened, by using the shortcut cmd+d in the iOS simulator or cmd+m when running in an Android emulator, the Developer Menu should open. Click the “Debug” option.

This should get your RNDebugger connected with your application. Now you are able to debug your app overall by taking advantage of the Chrome DevTools but also the reasons you came here... To check and debug your freaking Redux Tree.

So You Learned MERN. Now What?

a first look at graphQL helix

How to Check If Windows is 32bit or 64bit Via CMD Prompt Easily?