Here at /Data we offer certainty to those that are speculating about software developers: who they are, what they are choosing to do with at work and with their hobby time, and how they are doing it. We consider ourselves the analysts of the developer economy and often say that we help the world to understand developers…and developers to understand their world. 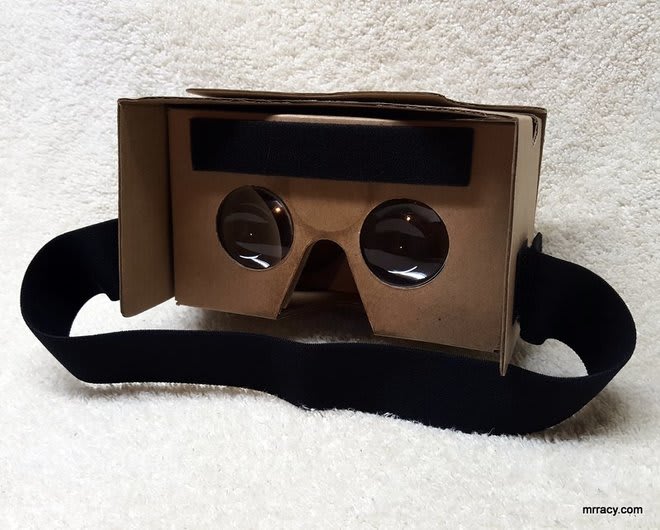 “Google Cardboard 3d, 360 degree video viewer” by mr.racy is licensed under CC BY 2.0

Two of the areas that we are often asked about by big businesses with skin in the game are Augmented Reality (AR) and Virtual Reality (VR). Part of my job is to brief top tier organisations on what the developer audience is focused upon so the companies can make the best decisions. I don’t speculate — I’m not brave enough for that. Instead, like every analyst at the company, I use our data to find trends and outliers in this emerging sector.

How do we get the data? We ask the people at the coal face, the developers. We do this twice a year through one of the largest and broadest surveys in the developer calendar. We have a set of questions about AR/VR which we update regularly to find out how the latest frameworks and hardware are faring, and which programming languages are most popular. We can tie the data back to the types of apps that developers are creating, whether they work professionally or as hobbyists, and where they are based, among other things. We write reports after analysing the data, which you can find here. The AR/VR reports are in the “Emerging” category.

In the rest of this blog post, I’m going to share a few key facts that we gathered in a recent wave of our survey (Q2 2018). We currently have another survey running and would love to include your opinions; if you share them with us, there’s the chance to win some awesome prizes. Interested? Take the survey.

OK, that probably came out wrong! AR/VR development is still not a mature area in that it’s hardly established in the same way as desktop or web development. We generally use the more polite term “nascent” to describe an area where most of the developers working in it are hobbyists, though often professionals in other sectors, or students. In nascent areas, we find most developers are simply trying out ideas to find out more about the basics of the technology and work out where to go with it.

AR/VR development is increasing in popularity, with over 20% of our survey respondents saying they had worked on such a project in the past 12 months. Given our estimates of the total worldwide developer population, that gives a global population of AR/VR developers of over 5M.

We see a high number of young, inexperienced developers in this area, which is another sign of a sector that hasn’t yet settled down sufficiently for businesses to build a stable ecosystem of professional developers within it. It’s a sign of churn, where developers try the technology and move on. Most AR/VR apps are developed within the games category and, where they are not, their developers are still uncertain of their audience. Among AR/VR developers, almost 2 out of 3 are not so much bothered about making revenue from their efforts, but are simply interested in gaining experience.

Hardware moves rapidly in this sector, and we find ourselves updating our question set for each survey as acquisitions and closures affect the vendor marketplace.

When it comes to VR, developers are clearly keen on sexy dedicated hardware such as Oculus. But our data reveals that the same number of VR developers work with the cheaper, smartphone-based option Google Cardboard. The hardware created by a range of third party device manufacturers, incorporating the Windows 10 Mixed Reality platform (which can also be used for VR) is also highly popular with VR developers. 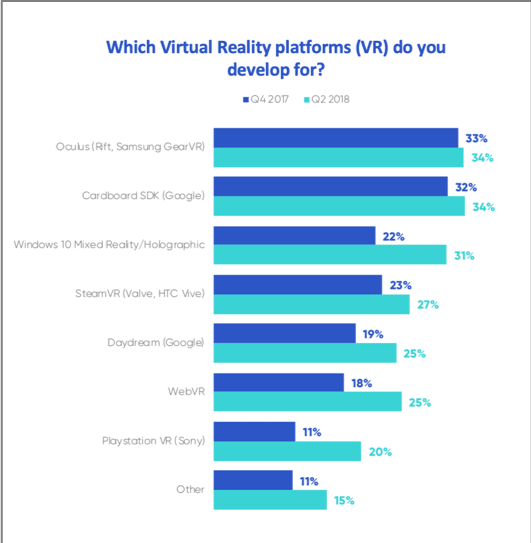 AR is a very different beast to VR. It’s well-suited for a smartphone platform, most famously made popular by Pokémon Go. Huge investments by Apple and Google are paying off. They are keen to get you developing on their platforms because of the massive potential within the app stores (again, see Pokémon Go for an example).

ARCore on Android and ARKit on iOS are the platforms of choice for AR development by some margin. The most popular wearable for AR is Microsoft HoloLens, as Magic Leap had yet to be launched at the time of the survey. It will be interesting to see how things have changed now that device is out of the closet. So, if you’re working on this newest of hardware, tell us about it in the survey!

AR is the simple, more accessible end of the spectrum for developers. The spectrum crosses from more sophisticated mixed reality up to full-blown virtual reality. Developers are finding that AR is a good place to start, particularly during this period where underlying technology and hardware undergoes rapid evolution and pricing levels for consumers start to wobble. Starting with AR, developers can learn how to blend virtual elements ever more seamlessly into the real world, and take their experience later into the convergence zone as virtual reality becomes a more realistic proposition for users and developers alike. It’s the gateway for many, and we are seeing more growth in AR than VR for this reason.

What about working cross platform?

Fragmentation is real, and being able to deploy across a range of hardware is always attractive. If you’re a game developer, and even if you are not, Unity and Unreal provide sophisticated cross platform development and tools that include AR/VR. They do come with a steep learning curve so we find them mostly popular with those already initiated (e.g. game devs). Other platforms such as Lens Studio, Spark AR and Sumerian are empowering AR developers, and we want to find out how popular they are becoming in the developer community.

To get this kind of useful information, and more, we need you in the survey this time around! We want to know what languages you are using, the hardware, the platforms, and the apps you are creating. Has the new Oculus Quest has piqued your interest and restarted the heart of VR development? Or is AR and mixed reality where it’s at? Why not take the chance to tell us? Help us tell the teams behind these products what you are deciding, so they can do their best to support you.

Have your say. Take the survey.

This blog post was originally by Jo Stitchbury at developereconomics.com

8 Amazing and Interesting Facts About Technology That Might Surprise You

How to become a developer

Developer Nation
Our mission is to champion a global collective of software creators who are confident in their technology choices and feel included in the conversation about the future of the ecosystem.
AR Engines, tools and SDKs
#arvr #ar #engine #resources
[SERIES] Did you know? Games is the most popular app category for developers and non-developers alike?
#gamedev #game #ar #arvr
[SERIES] Did you know? 22% of AR/VR non-developers are learning to code
#ar #programminglanguages #beginners #nocode

Once unpublished, this post will become invisible to the public and only accessible to Developer Economics.

Thanks for keeping DEV Community safe. Here is what you can do to flag developernation: