Three weeks ago, I started this series called DevRelCarousels. The major inspiration for this was the lack of structured knowledge about Developer Relations (DevRel). Although being a vast field with companies investing in them heavily, DevRel remains a very ‘hard to get into’ field with people just knowing it over the top, even in the presence of some great articles by the awesome folks in the profession.

If I talk about becoming a Developer, getting into DevOps, or just writing code, it’s much easier to get a gist of the job role in a well-structured way. This is because these are rather popular fields in the market. But being a fairly new segment of both Development and Marketing, with rather unconventional ways of being in the job role, DevRel is highly misinterpreted.

Hence, I thought of starting this as just a small way of giving beginners an overview about what to expect in DevRel and continuing further, how even to approach it. I won’t say that this is the best structured way of interpreting it because this is my perspective and what I’ve learned over the course of two years, reading different articles, books and talking to people about approaching DevRel as a career choice.

Continuing this series further with this week’s topic — Developer Advocates. This week, I’m accompanying this blog alongside the carousels for the reader to get a further explanation about each slide, which was major feedback I got while rolling out the initial carousels. So starting here, let’s dig deeper into Developer Advocacy. 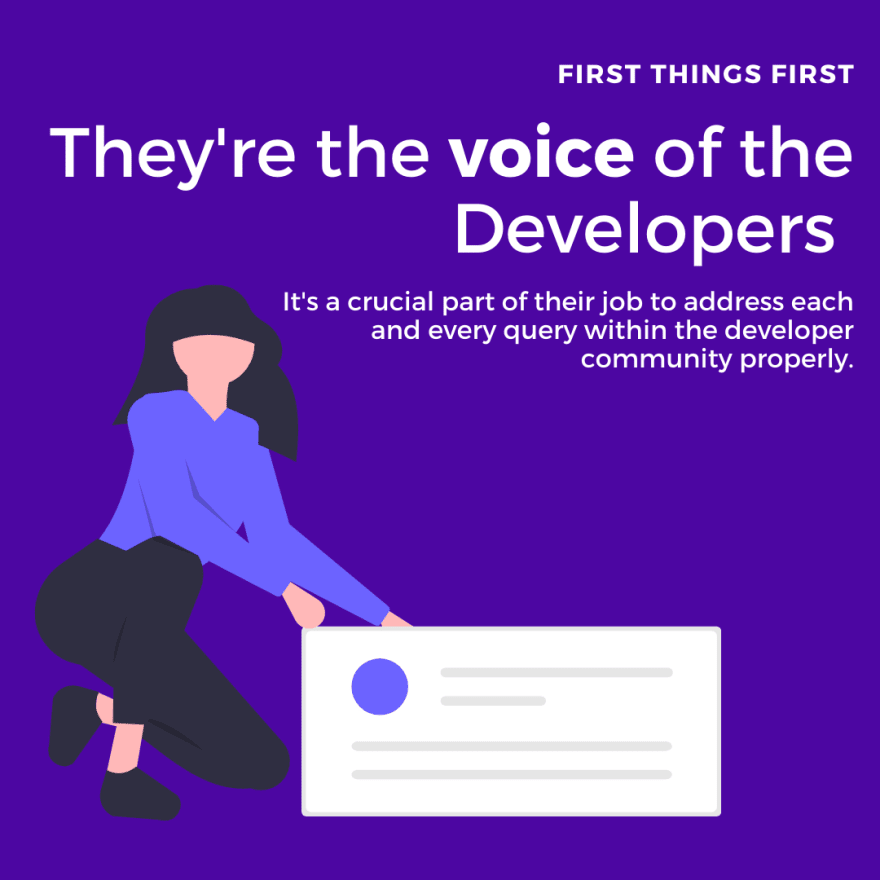 Developer advocates are the voice of the developers.

As mentioned in the slide, it's an integral part of their job to address all the queries properly. If a developer is facing any problem, they’ll always be there for them. Their position is such that developers willingly share their feedback and their knowledge about the product. There’s something about them that makes them stand out in a community of developers. 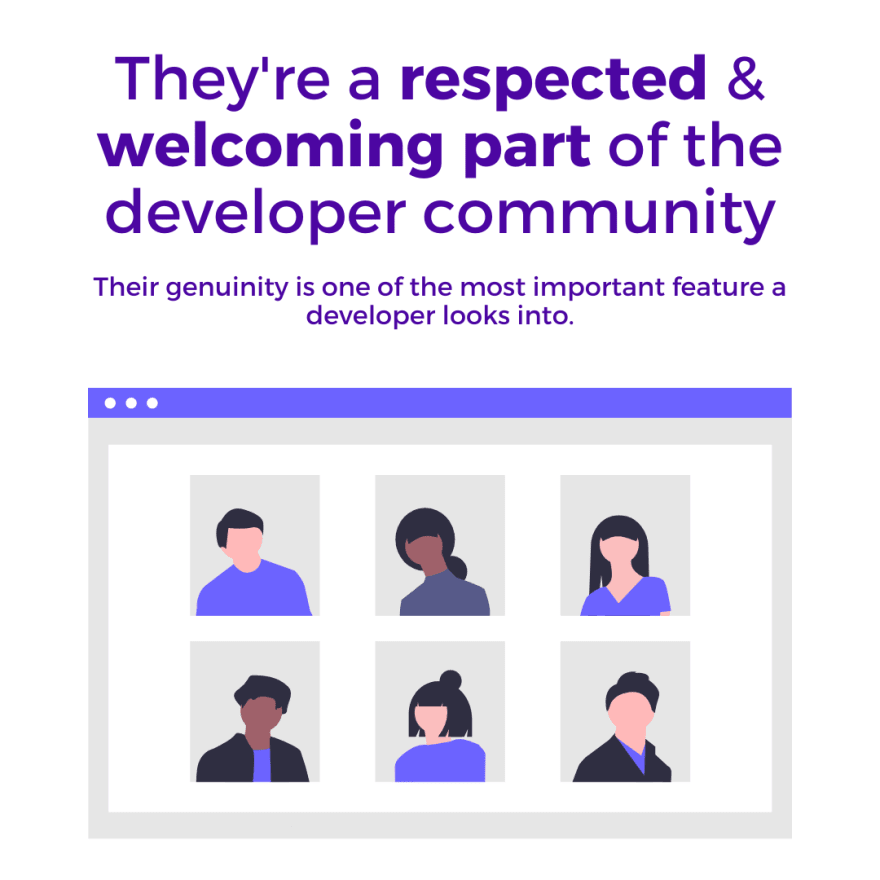 Developer Advocates are a respected & welcoming part of the developer community.

Be it any tech conference, if the community needs it, a developer advocate will be there for them. Even in a sponsored conference of a competitor company, there’s a high chance you will find a developer advocate. Why? Because the community needs their input, their point of view and expects them to be honest about it, even if it’s not their company’s own product. This makes them special and unique from any traditional marketing-based role! 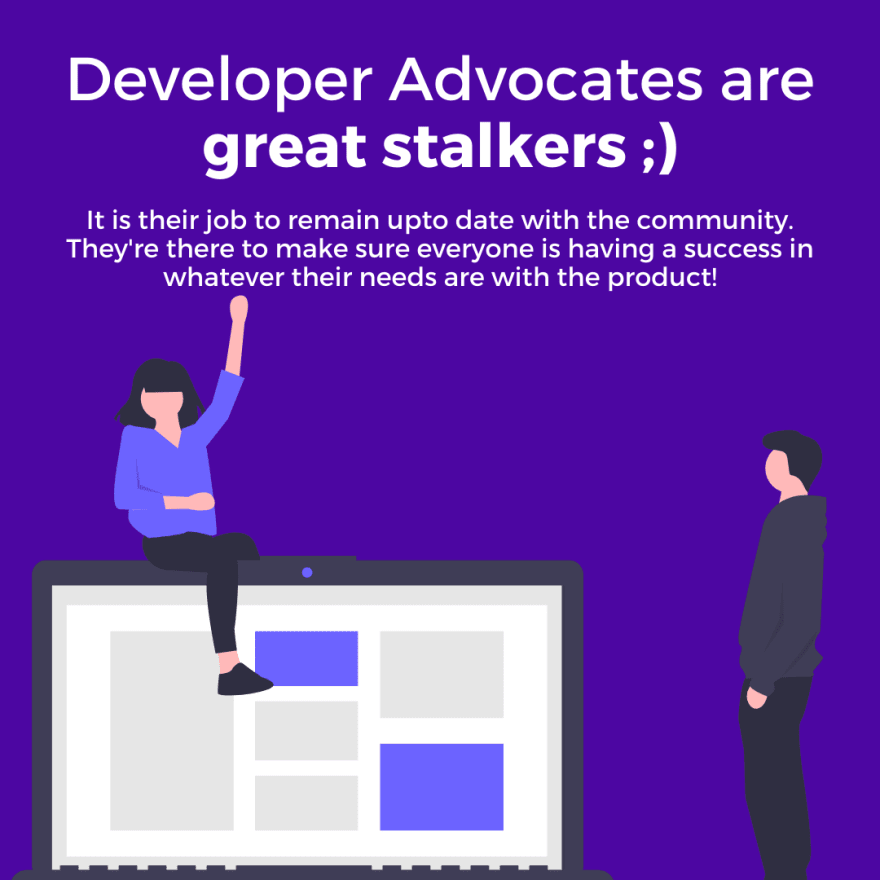 Well, not in a bad or creepy way, of course. They have to remain up to date with the achievements and the ongoings within the community. Any question or need — a developer advocate needs to know that. Using any of the mediums available, they closely follow sites like DEV, StackOverflow, read tech forums, blogs, etc., to gather as much information as possible on how the community is reacting towards the product. 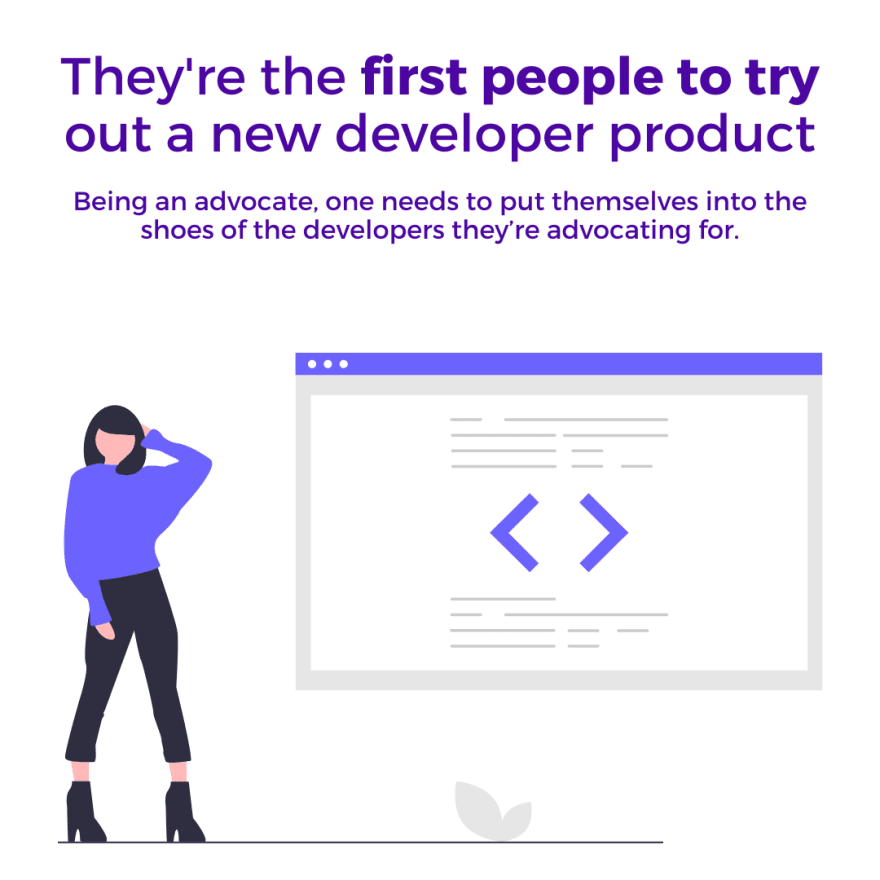 Developer Advocates are the first people to try out a new developer product.

Being an advocate, one needs to put themselves into the developers' shoes they’re advocating for. They must know the insides of the product or the platform they’re are advocating for.
Having said that, developer advocates generally have a decent knowledge of other platforms, even those made by their competitors! Seems a bit out of place, right? But if you think about it, it’s pretty obvious. The developers choose to use different products and tools to build their apps — A Developer Advocate knows that! 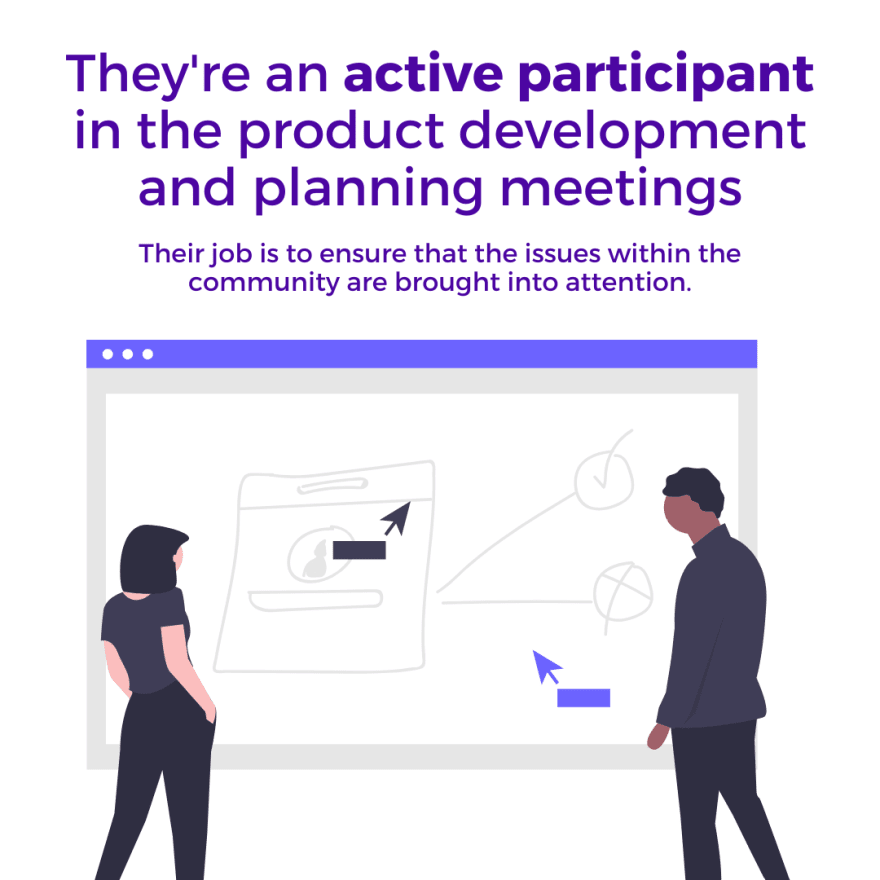 Developer Advocates are active participants in the product development and planning meetings.

While planning a product, a company needs various perspectives. Feedback becomes a crucial driver here. Getting a varied perspective not only adds additional things to discuss and revamp upon, it also redefines the whole strategy of moving forward. Developer advocates step in here, making sure that the issues in the product which result in bugs or the difficulties of using it are brought to attention and are prioritized accordingly. 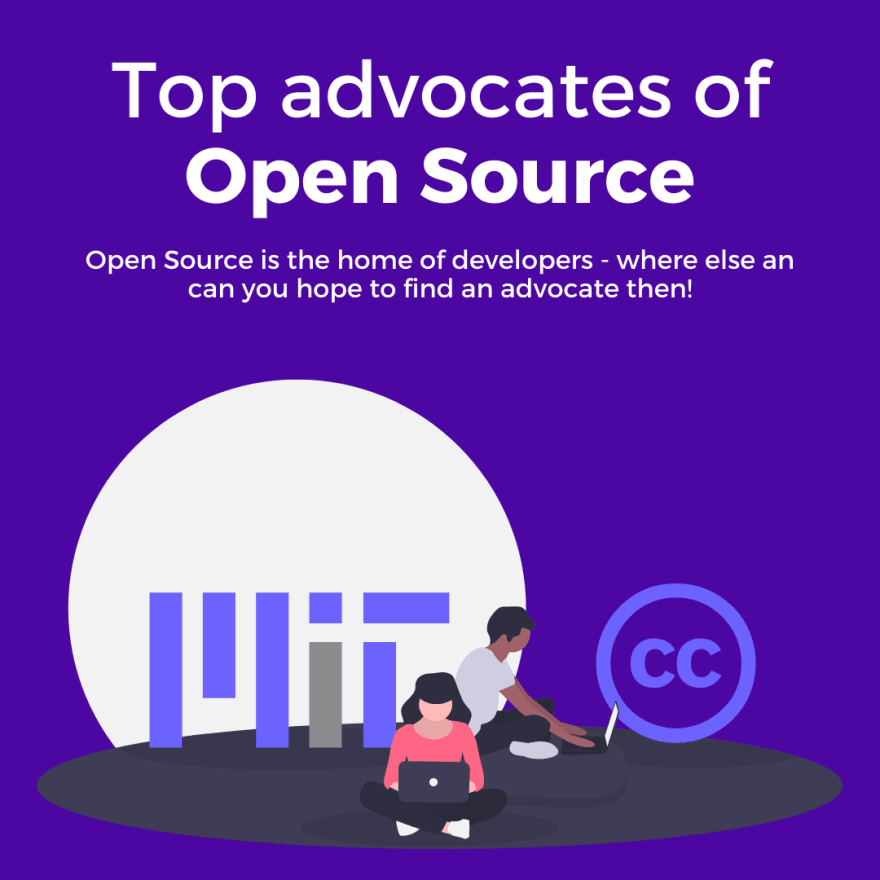 Developer Advocates are the top advocates of Open Source

As obvious as it sounds, open source is where developers reside. It acts as a safe space for any product developers, making sure the dominance and exploitation by a single large corporation in the market are not affecting the whole community of developers and the market that revolve around them.
This takes us to look at an interesting perspective. The influence of developer advocates within an organisation is that even companies like Microsoft ultimately understood the power of Open Source and why developers are inclined towards it so heavily. 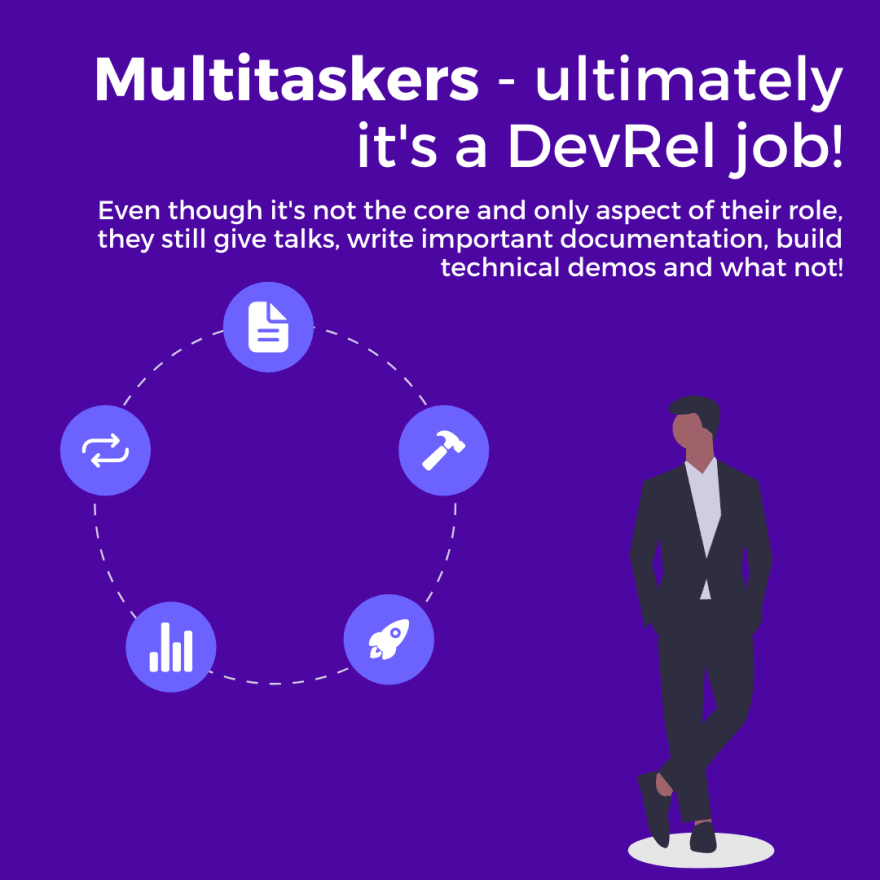 As we all know now, people in DevRel are known to be multitaskers!
Developer advocacy being a DevRel role at the end of the day, has to involve being a multitasker. They can always be found giving talks at hackathons, meetups, or conferences, assisting their part in writing important documentation, building technical demos for the team’s presentation — even when it’s not the core and only aspect of their role. 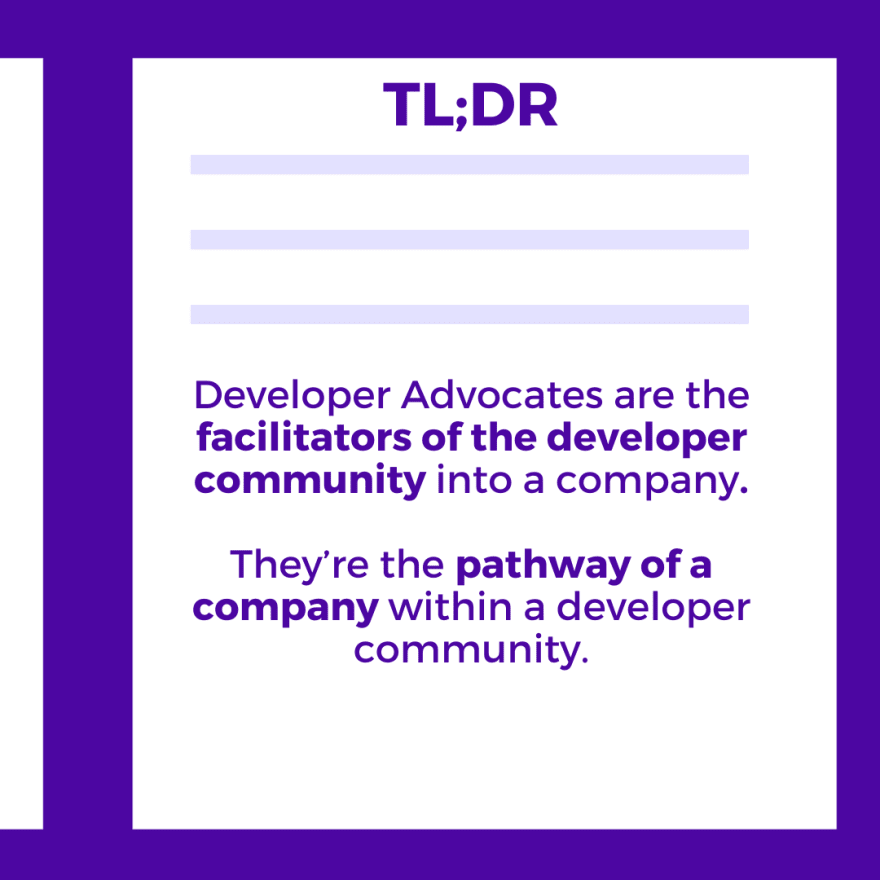 Developer Advocacy changes the definition with every company and its corresponding needs. Adding different flavours into it, some are also called Program Managers, Community Advocates, or whatever else that suits the company's requirements. But one thing is for sure,

State of Cloud Communities in France