This annual holiday was created in 2010 by AIUNAU, an animal welfare group based in Colombia, to raise awareness for the threats facing sloths due to deforestation. If you're wondering how you can help nature's slowest mammal, don't miss this article from The Sloth Conservation Foundation.

Ok, cute! But why are we talking about sloths on DEV at all?

Great question. It's not because these sleepy animals are one of nature's most relatable creatures (especially, you know, the morning after being on-call). We felt compelled to give sloths a special shoutout today because our beloved mascot, Sloan, is a sloth ❤️ 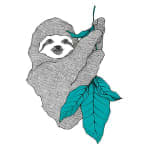 I help moderate content and welcome new users to this platform. I also ask questions on behalf of members looking for advice from the community.

To celebrate Sloan and all the sloths out there on International Sloth Day, here are five fast sloth facts...

At least in terms of their energy expenditure. The metabolic rate of sloths is just 40-45% of what would be typical for their body weight! This slow metabolism complements sloths' leafy diet and is the basis for their drowsy reputation.

Don't let Sloan drive your car — they wouldn't be able to see the exit signals. In fact, three-toed sloths can't see their own babies from 5 feet away and sloths in combat have been observed trying to stike one another from far away!

Despite their preference for napping and extremely slow movements, these tree-dwellers are actually great swimmers!

Three-toed sloths are the slowest animal on earth (slower than snails or tortoises!). But while sloths were first documented in 18th-century scientific texts as "the lowest form of existence" (RUDE), their slow pace has allowed them to evade predators.

5. Sloths are helpful to software developers!

Or, at least, Sloan is helpful. Did you know that if you want to ask a question of the DEV community anonymously, you can share it with Sloan and they'll post it on your behalf? Pretty generous for a creature that would much rather be sleeping if you ask us! Details on how to submit an anonymous question to Sloan here.

Happy International Sloth Day to all of you! And to Sloan, thank you for being the beloved mascot of the DEV community 🎉

what tech stacks do you use?

Why LinkedIn Sucks and How Should We Be Using It?

Where do you find CFPs (Call For Papers) and Conferences to speak at?

Once unpublished, this post will become invisible to the public and only accessible to Gracie Gregory (she/her).