Font Awesome is an incredibly popular library for adding icons to webpages. Pretty much every site these days use icons of some sort, and chances are they are loaded via Font Awesome. What exactly does "incredibly popular" mean? According to their landing page, the library is used on 100,000,000 sites. They are the de facto default for including icons on webpages. The project makes adding icons to sites simple by including them as a font, but there are alternative ways to use Font Awesome icons, such as SVG.

Thanks to popular demand from the community, our logo is now a part of the set. There are 388 total brand icons in the entire set, including some alternate versions of certain logos. In all there are about 250 total companies included in the Font Awesome set and DEV is now one of them. That puts us in remarkably exclusive territory. A lot of our members have been adding the DEV badge to their Font Awesome-driven personal sites in various hacky ways, but now we're part of the default. 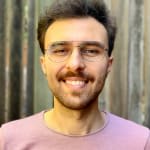 How I redid the DEV badge using Font Awesome [updated]

Now that we are officially part of the library, you can add <i class="fab fa-dev"></i> to your any page that already makes use of Font Awesome!

The above SVG file is only 798 bytes. If you want to modify the color of that SVG you can change the fill attribute in its code. If you are not familiar with SVGs, they are vector images constructed with markup language, and are a very powerful concept. Here's a good post on the web technology:

Thank you to Font Awesome for validating our project by inclusion in version 5.4 and thanks to the community for making this happen. If your site has the DEV badge alongside your GitHub and Twitter badges etc. feel free to link to it in the comments to show it off. 😄