It’s fun and pleasurable to make children. In fact, it’s orgasmic. But, there tends to be an upper bound on the number of children a couple could bear. At some point, the couple presumably understands that another mouth siphoning scarce resources would be detrimental to the entire family, and cannot possibly be sustainable. I’m sure you see where I’m headed with this.

Building new features is highly fun and entertaining. In fact, you might even call it the orgasm of the technical world. You’ve brought forth new life that had not been present before. With a few lines of code, a few third-party libraries here and there, your app is now capable of new things, and you couldn’t be prouder.

But there is a high cost to these violent delights. Adding features is a weapon that should be used sparingly. Here's why:

Recently, a somewhat-competitor of Standard Notes added a new feature to their app: an Apple Watch companion application. It was actually really nicely done, which means they spent some time on it. This was good news to me. I don’t believe a watch app is necessary for a notes app, and those scarce resources could have been directed to much more important problems. Instead, they chose to use their resources to build a complicated feature with little ROI. At this rate, all I have to do is continue pacing myself, and I have the potential to outlast them on stamina alone.

Finally, heed this warning from a guy who will be perpetually enslaved to a feature that all his users could have probably lived without: 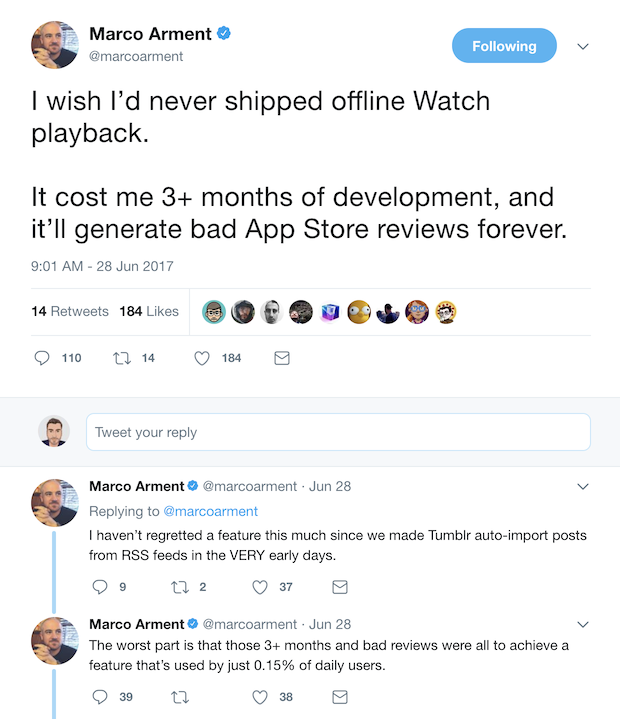 Thanks for keeping DEV Community 👩‍💻👨‍💻 safe. Here is what you can do to flag devtouser432: