Hello there! We're coming out of the shadows and continuing the series of articles about our product. We've got so many feedbacks (mainly positive), suggestions, and bug reports after publishing our last overview article. Today you'll see TestMace in action and try out some features of our application.

For more information be sure to look over its documentation - http://docs.testmace.com. Let's go!

We'll start with some basic things. Our application is available and is being tested on three platforms: Linux, Windows, MacOS. You can download an installer for particular OS from our site.

Linuxoids can install a snap package.

We're really hoping to get our hands on Microsoft Store and App Store (should we?).

For our little experiment we have the following standard scenario:

We'll be using the https://testmace-quick-start.herokuapp.com url. It's a plain json server, perfectly suitable for testing this kind of applications. All we've done is token authorization for all json server routes and the login method for getting this very token.

Creating a project and trying to create an entity without authorization

Let's start with creating a new project (File->New project). If TestMace is launched the first time, it'll be done automatically. Let's issue a request for creating a new post (in case if it is possible without authorization). In the Project node context menu select Add node -> RequestStep.
Name it create-post. You'll see a new node in the project tree and it's tab will be shown.

If you do it right, you'll see the following interface: 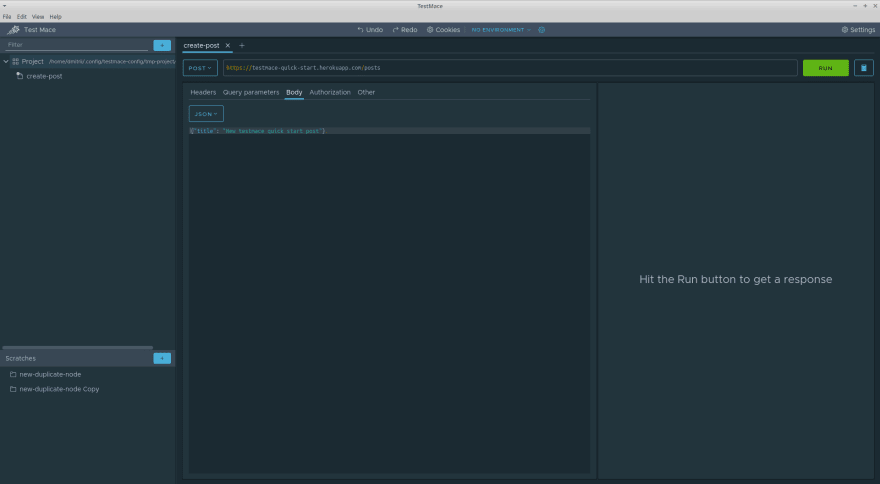 However, if you send this request, the server will return the 401 code, and you won't be able to do anything with the server without authorization. Just as expected.

Let's use it for authorization. Create a RequestStep node named login with the Project node being its parent. Drag and drop this node above the create-post node in the tree.
Set the following parameters for the newly added node:

If you send the request, you'll get the 200 code with the token as a response: 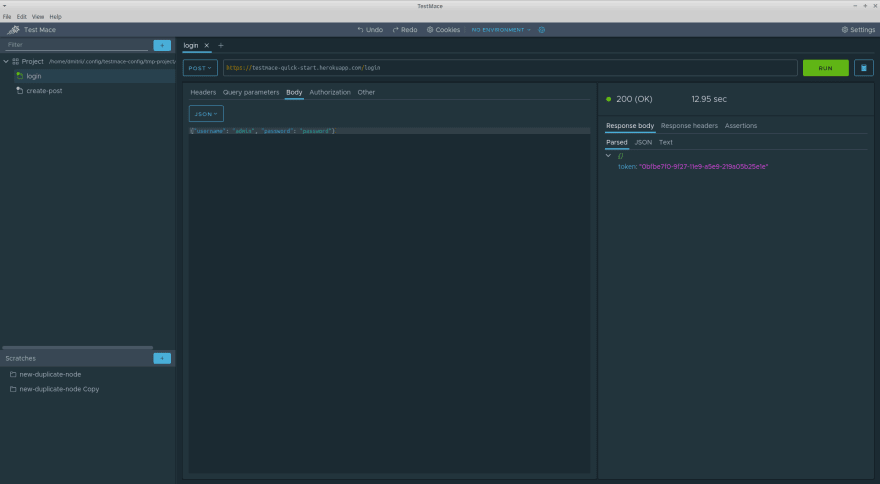 Our requests are not grouped in one scenario yet. But that is not the only problem here. If you look at them closer, you'll see that the domain is duplicated in both requests. That's not good. It's time to refactor this part of our future scenario with the help of variables.

Variables in TestMace roughly do all the same things as in other similar tools and languages - deduplication, improving readability, etc.

Refer to our documentation to read more about variables. This time we'll need user-defined variables.

Define the domain variable with the value https://testmace-quick-start.herokuapp.com at the Project node level. To do that, you need to:

In our case, the variable dialog will look like this:

OK. Now we can inherit this variable in children of any nesting level and in the login and create-post nodes in particular. To use the variable in the text box, you should write ${<variable_name>}. For example, the url for login will be written as ${domain}/login, and the url for the create-post node - ${domain}/posts.
By doing so, we've followed the DRY principle and improved our little scenario.

Storing the token in a variable

While we're on the subject of variables, let's go a bit further. If the login is successful, we get an authorization token from the server, that we're going to need in future requests. Let's save this token into a variable. Since the variable value is defined while running a scenario, we'll use a special mechanism called dynamic variables.

First, let's send the login request. In the Parsed tab of the response point to the token in the context menu and select Assign to variable.

You'll see a dialog with the following fields:

The dialog with complete fields should be the following:

At this point, every time the login node runs, the token variable is updated with the value from the response. This variable will be stored in the Project node and will be available in child nodes, thanks to inheritance mechanism.

To access dynamic variables, use the default variable $dynamicVar. For instance, to get to the saved token you should write ${$dynamicVar.token}.

Passing the authorization token into requests

Previously we've received an authorization token and now we only need to add the Authorization header with the Bearer <tokenValue> value to every request where authorization is needed, including the create-post request.

There are a few ways to do that:

Using default headers is much more exotic. Long story short, default headers are inherited HTTP headers that are by default added to requests if you don't turn it off explicitly. With the help of this feature you can, for example, implement custom authorization or get rid of duplications in your scenarios. Let's use this feature to pass the token through the headers.

Earlier we've saved the token into the $dynamicVar.token dynamic variable at the Project node level. Now we have to: 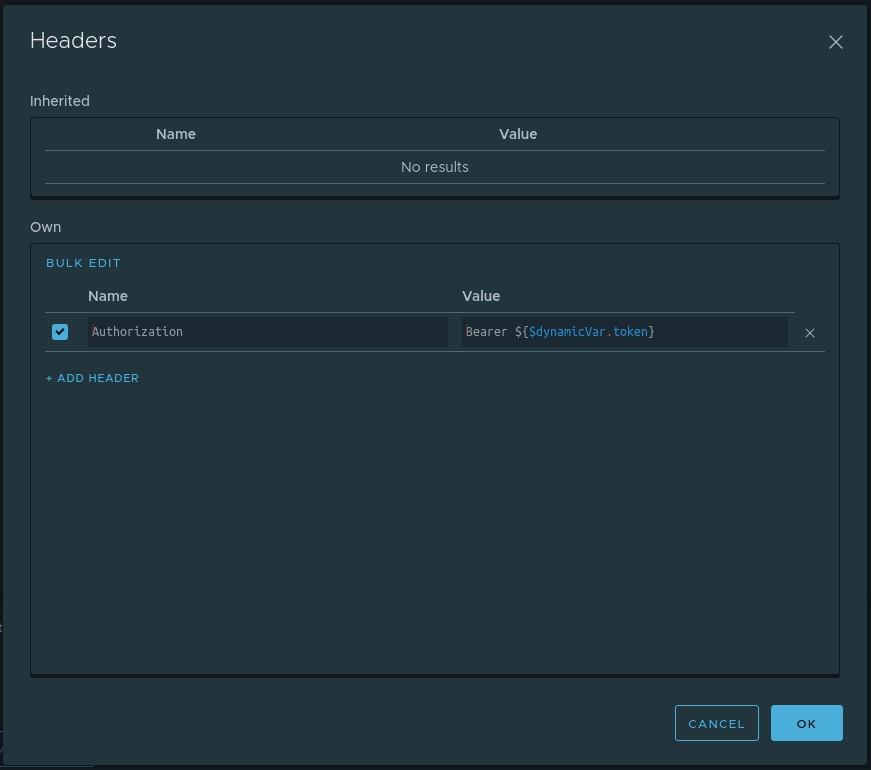 So far, our scenario can log in and create a post using an authorization token. But we have to make sure that the created post has the correct name.

So here's what we need to do:

Let's discuss the first step. Since the id value is defined while running the script, we need to create a dynamic variable (let's name it postID) in the create-post node at the Project node level.

You already know how to to that, just go to the Storing the token in a variable section. All we have left is sending a request for getting the post by its id.
Create a RequestStep node named get-post with the following parameters:

To go further, you need to take a closer look at Assertion nodes. An Assertion node is a node that allows to create tests for specific requests. Each Assertion node may contain several assertions (tests). To learn more about supported assertions you can refer to our documentation. We'll use a Compare assertion with the equal operator.

There are two ways of creation assertions:

Let's stick with the second one. Here's how it'll look like for our example:

Basically, you do the following:

Wow, we've just created our first test! Simple as that! Now you can run the full scenario and enjoy the result. You can make it even more beautiful if you put title into a separate variable though.
We leave it to you as an exercise :)

In this guide we created a full-blown scenario and tried some features of our product as well.

Of course, these were just a few of them, and we're going to make a full review of all TestMace features next time. So watch out for updates in our blog!

P.S. If you feel lazy to follow the steps described in the article, we've have a repository with this project just for you. Select File -> Open project and choose the Project folder.

Hi! My name is Dmitrii, I'm a software developer enthusiast. I work on a new advanced IDE to work with API TestMace

Why I ignore the hype (and you should too)

It’s been 20 years since I made my first website. I've been burned by the hype ti...

Some UI testing problems and the Cypress way

DEV is a social network for software developers to level up their craft. It's free and it's fully open source.