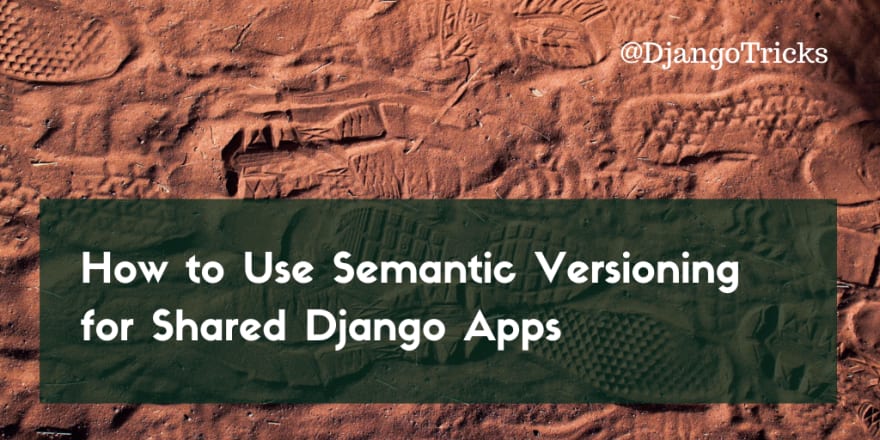 When you are building websites with Django, there is no need to track their software versions. You can just have a stable branch in Git repository and update the production environment whenever it makes sense. However, when you create a Django app or package shared among various websites and maybe with multiple people, it is vital to keep track of the package versions.

Versioning allows you to identify a specific state of your package and has these benefits:

The most popular versioning scheme is called semantic versioning. The version consists of three numbers separated by dots. Django framework is using it too. For example, the latest stable version at the time of writing is 3.2.9. In semantic versioning, the first number is the major version, the second is the minor version, and the third is a patch version: MAJOR.MINOR.PATCH.

There can also be some versioning outliers for alpha, beta, release candidates rc1, rc2, etc., but we will not cover them in this post.

By convention, the package's version is saved in its myapp/__init__.py file as __version__ variable, for example:

In addition, it is saved in setup.py, README.md, CHANGELOG.md, and probably some more files.

When you develop a Django app or another Python package that you will share with other developers, it is also recommended to have a changelog. Usually, it's a markdown-based document with the list of features, bugs, and deprecations that were worked on between specific versions of your package.

A good changelog starts with the "Unreleased" section and is followed by sections for each version in reverse order. In each of those sections, there are lists of changes grouped into categories:

This could be the starting template for CHANGELOG.md:

To keep track of the versions manually would be pretty tedious work, with the likelihood of forgetting one or more files or mismatching the version numbers. Gladly, there is a utility tool to do that for you, which is called bump2version.

Install the bump2version utility to your virtual environment the standard way with pip:

Set the version to 0.0.0 in all other files, where the version needs to be mentioned, for example, README.md and setup.py.

Replace "django_myapp" and "myapp" with your Django app there. If you have more files, mentioning the package version, make sure to have analogous version replacements in the setup.cfg.

Commit and push your changes to the Git repository.

Every time you want to create a new version, type this in the shell:

followed by the command to build the package:

The bump2version command will use the configuration at setup.cfg and will do these things:

There are two things to note there.

First, in Markdown, there are two ways of setting the headings:

Usually, I would use the second format for Markdown, but the replacement function in setup.cfg treats lines with the # symbol as comments, and escaping doesn't work either.

For example, this wouldn't work:

If anybody knows or finds a simple solution with the shorter Markdown variation, let me know.

Second, instead of using setup.cfg, you can use .bumpversion.cfg, but that file is hidden, so I recommend sticking with setup.cfg.

You can see this type of semantic versioning configuration in the paid Django GDPR Cookie Consent app I recently published on Gumroad.

A simple approach for background task in Django

Once suspended, djangotricks will not be able to comment or publish posts until their suspension is removed.

Once unsuspended, djangotricks will be able to comment and publish posts again.

Once unpublished, all posts by djangotricks will become hidden and only accessible to themselves.

If djangotricks is not suspended, they can still re-publish their posts from their dashboard.

Once unpublished, this post will become invisible to the public and only accessible to Aidas Bendoraitis.

Thanks for keeping DEV Community 👩‍💻👨‍💻 safe. Here is what you can do to flag djangotricks:

Unflagging djangotricks will restore default visibility to their posts.