In this article, I will show you why gaining test automation skills are needed for your quality assurance career if you want to remain marketable as a tester. I will tell you what technical skills and automation tools you need to learn about if you’re just getting started with test automation.

Why 2019 is a great time to be an automation tester?

Since test automation is one of the career fields experiencing the most growth in the world right now, it’s rare to see a job listing for a test role where there isn’t at least a demand for an understanding of test automation and at least one scripting language. At the time I’m writing this article, there are roughly 16,955 available jobs in Test Automation Engineering on Indeed, 30,705 jobs on Glassdoor, and 5,580 jobs posted on LinkedIn. These numbers indicate the high demand for this skill nowadays, and for that reason you shouldn’t worry much about the risk of career change. Keep in mind the fact that as an automation tester, you’ll always be needed and will find no lack of leading companies trying their hardest to recruit you, and there are constantly opportunities to grow in your career to reach a managerial level. 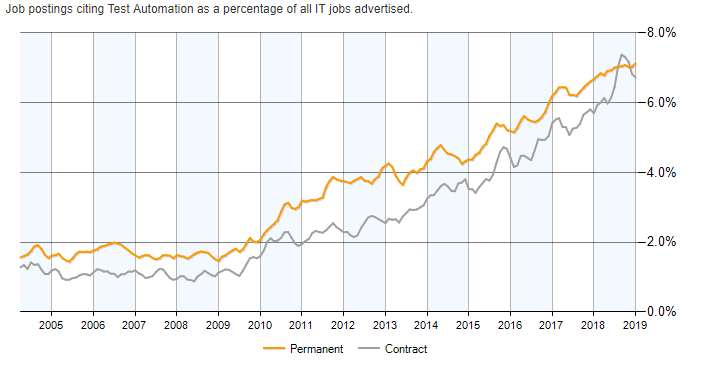 What do you need to prepare for your automation testing career?

To excel in this field, testers must be aware of automation tools and modern techniques that are being used in the testing industry. This doesn’t mean you’re being asked to be programmers, but it does require automation testers to have a programming background. Programming skills can help testers communicate better with developers and participate in unit testing. As automation tests are closely connected with code, the knowledge of the programming language that the team works with is one of the critical requirements for a tester. If the product is written in Ruby, then the tester needs to have Ruby experience on their resume. Besides definite programming languages such as Java, C/C++, Ruby, Python, Perl, some other required skills include knowing SQL and relational databases, experience with HTTP/HTTPS, HTML, CSS, JS, XML and testing APIs, knowing one of the frameworks (i.e., Cucumber for Ruby) is definitely an advantage.

You can initiate your test automation path by referring some popular software testing blogs and forums like Utest, Software Testing Help, Stickyminds, Ministry of Testing, etc. These sites help educate and inspire teams of all types and sizes to test automation.

As I mentioned, the more technical and test automation skills you have, the more marketable you’ll be as a tester. However, anyone who is serious about a career in testing would do well to pick up a powerful automation tool. Most available test automation tools in the market are developed with a programming mindset. Some of the most popular tools:

Among these tools, I have found Katalon Studio to be the most user friendly automated software testing tool. You can easily automate web services and mobile testing and execute the scripts on your desired platform. The most interesting features is the spy utility, which captures the web and mobile objects with just one click. Katalon Studio is intelligent enough to capture your element with all possible locators. If you just started learning programming for automation testing, please find the simplest test scenario that needs to be repeated a thousand times in your project. Then create a simple automation script to run it and check the result of the test. These easy tests will motivate you to create more and more scripts and avoid manual procedures whenever possible.

Other ways to gain solid knowledge in test automation are joining local meetups and conferences such as STAREAST, STARWEST, Agile Testing Days, and QualityJam. Last month, I had a chance to join a webinar co-hosted by Katalon Studio and ToolsQA about the software testing trends of 2019. I found this webinar to be amazing and practica, and I would suggest you try to register for similar events.

More details are available at https://testautomationresources.com/software-testing-basics/test-automation-engineer-salary/

Main developer roles of 2021: Where do you fit in?

5 steps for performing well in a new job

Before I land a job as a developer, mistakes that I've made by learning how to code by myself