The cover images for this post is by marvelous

I was recently asked (via DM) by someone on Twitter about writing a blog post on the tools that I used for creating media. It should be of no surprise to some of you all that I create a number of podcasts. In fact, I wrote a post with disparate pieces of advice for aspiring podcasters:

Starting a Podcast - My Advice

For those wondering, I'm involved in the creation of two

psst. it's soon to be three

Here is an embedded player for the latest episode of The .NET Core Podcast at the time of writing:

How Do You Even Start with Josey Howarth 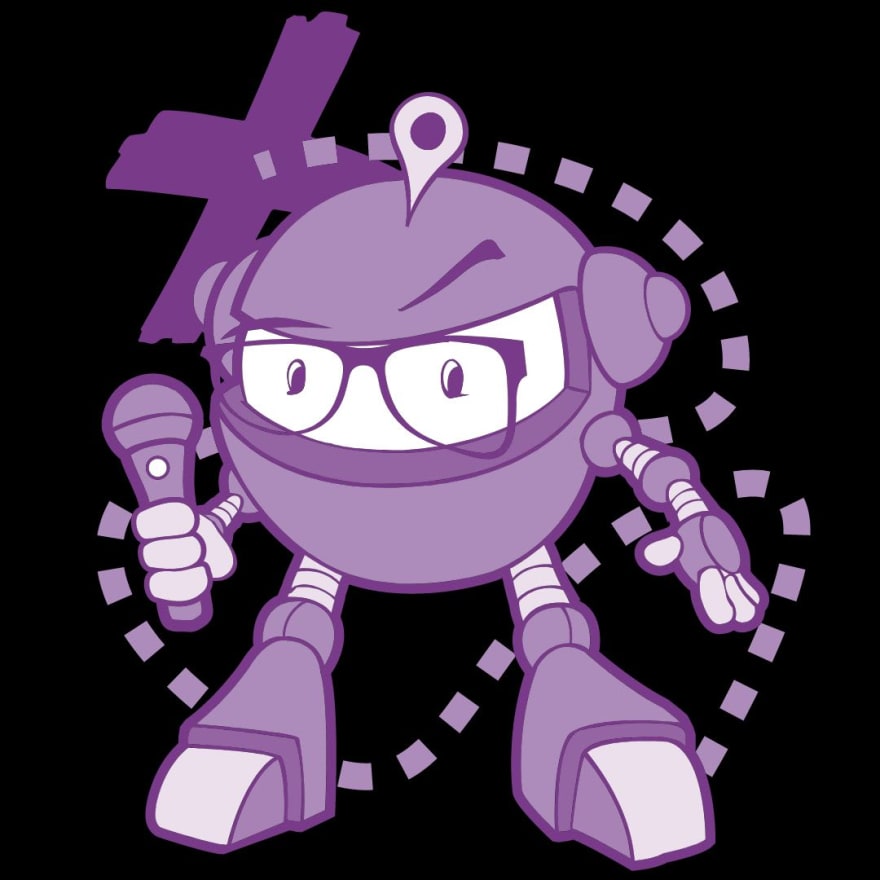 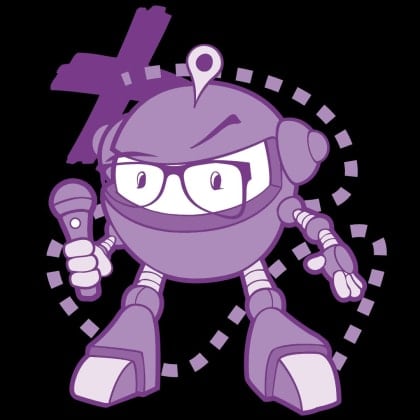 I've also tried my hand at video creation and editing - something you can see in my live coding streams:

But I have tried my luck at creating SVG icons for some of my open-source libraries, such as the logo for my ASP .NET Core middleware for injecting OWASP recommended HTTP Headers: OWASPHeaders.Core 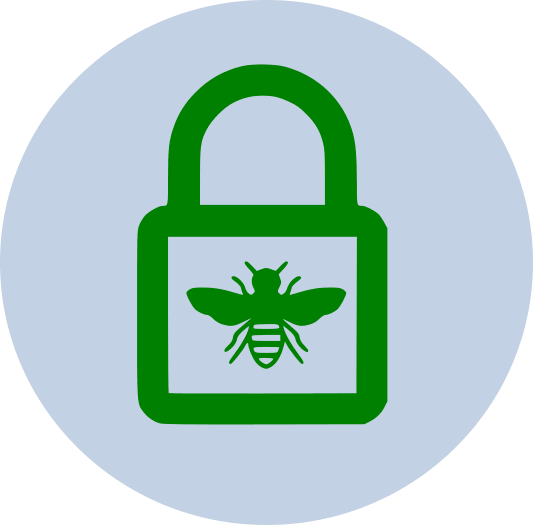 All of this whilst using Pop!_OS as my daily driver OS. So which tools do I use:

Aside from my development work (and writing), the majority of my time is spent doing audio work. So how do I go from no audio to a fully rendered MP3 of a podcast episode?

note: I started planning this blog post before I hired an editor, who takes the lion's share of the editing work from me

It all starts with VS Code: 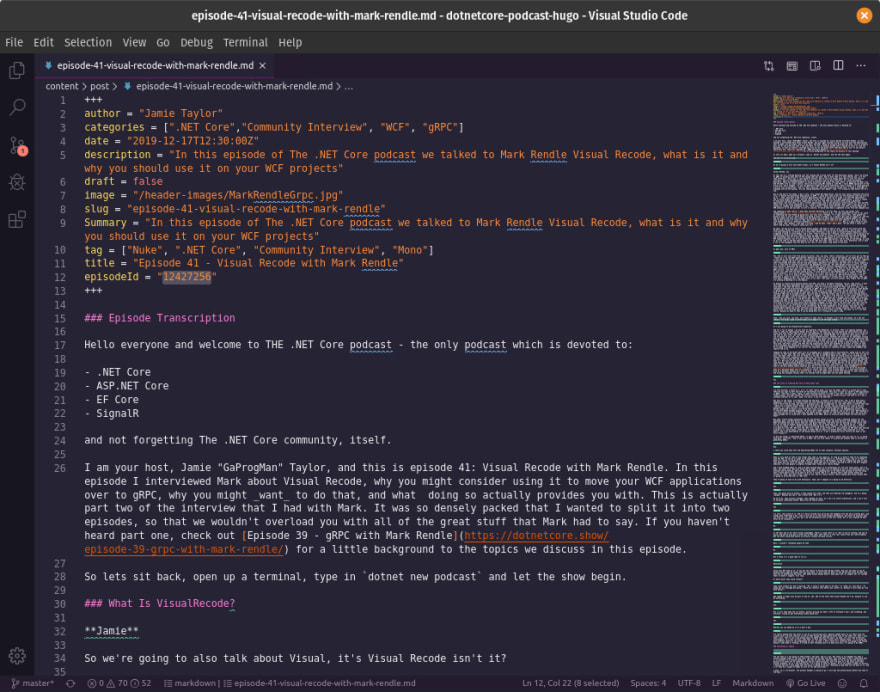 I start with VS Code when planning out episodes because I can quickly type out my idea using markdown. There are other editors which do a good job of rendering markdown, but I also use VS Code as one of my IDEs - so I'm happy using it for markdown, too.

I use VS Code to write out a plan for an episode idea or to take a bunch of ideas and expand on them. This is then saved in a private git repo

I have a .NET Core template which I can use to scaffold everything I need to record a new episode: 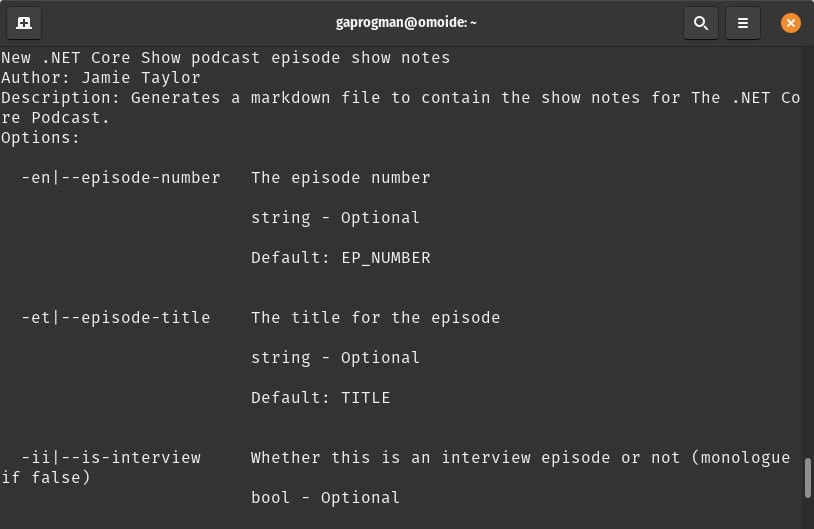 note: the open-source version only scaffolds the markdown show notes; whereas the closed source version does all of the episode scaffolding for me

I use this to quickly set up everything that I might need in order to record a new episode of the podcast.

Once the recording is completed, I'll use Audacity to edit the raw audio. 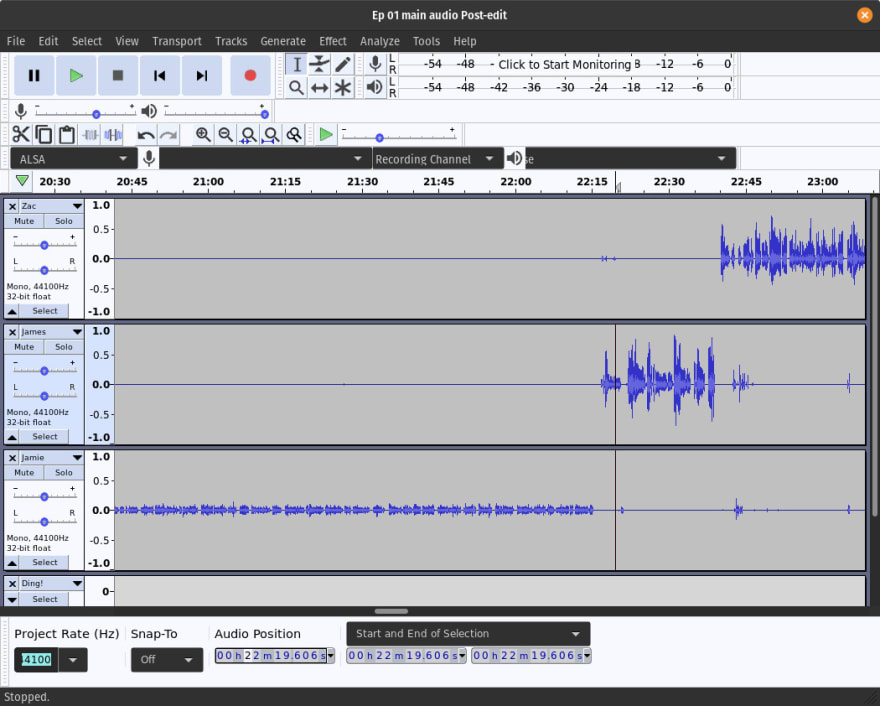 This is the application that I'll spend the most time in when putting an episode together. Editing and post-producing

which are similar, yet subtly different, things

an episode takes a long time - the rule of thumb is that 30 minutes of audio will take 60 minutes of work.

Auphonic is an amazing post-production tool, especially if you're not a fully-fledged audio engineer. 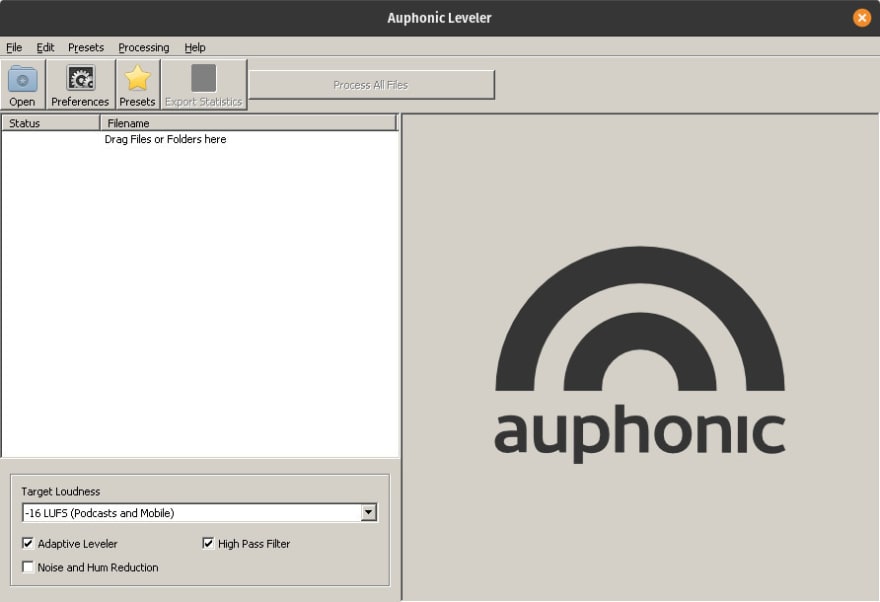 This is the first paid tool on the list, but I'm happy paying for it because it makes my shows sound much better than I could. It's also really simple to use - the default setup is almost perfect for my shows. I feed this app an uncompressed wav file (exported from Audacity), and it gives me an MP3 with radion and TV industry-standard audio levelling.

Beware: although there are desktop versions of Auphonic, there isn't a native version for any Linux distros. This means that you'll have to setup WINE in order to run the Windows version of Auphonic on your distro.

Once I have the MP3, I put it through kid3 in order to tag it correctly. 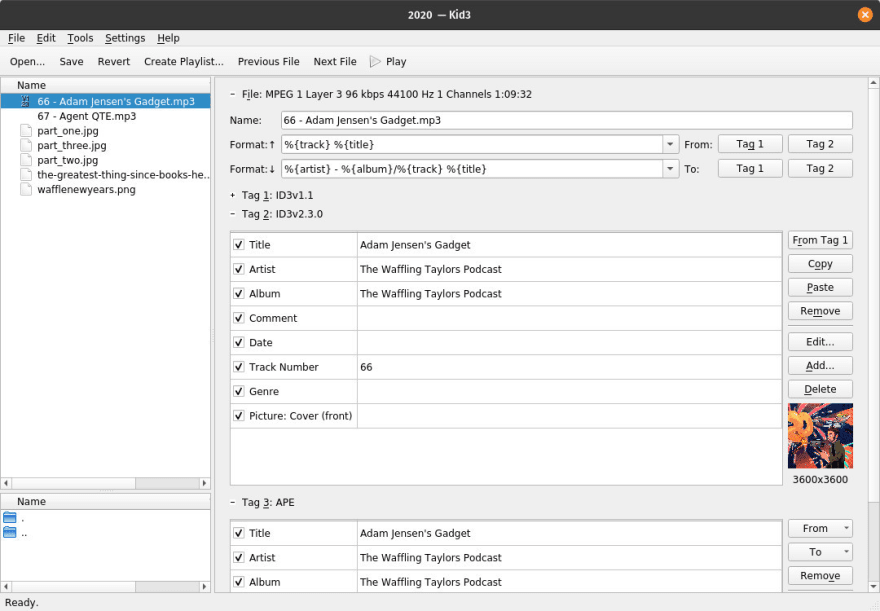 I like to set the ID3 tags on episodes of my podcasts before I upload them. Most podcast hosts allow you to alter them once episodes have been uploaded, but you can use the contents of the tags to auto-fill most data on podcast host sites.

Also, setting ID3 tags on any audio that you create

assuming that you're creating MP3s

will your listeners happy.

In the past, I have scheduled live code sessions

something I'm tempted to get back into

and these have been facilitated by a single application:

OBS. This has become the de facto application for streaming video to and from services like Twitch, Youtube, and Mixer. It's used by the pros along with the amateurs

Did you know that the software which ships with Elgato devices is simply a re-branded version of OBS?

I use two applications when creating images or doing any kind of (admittedly simple) design work:

It's incredibly powerful, but the work that I do with it barely scratches the surface of what's capable with it.

When I need to work with SVGs or any kind of illustrations, I open Inkscape first.

Just like GiMP, Inkscape is super powerful and I'm barely even scratching the surface of what it can do. I've used it to create the icons for the majority of my opensource projects, and for touch up work on the Waffling Taylors logo ready for placing on business cards and hoodies: 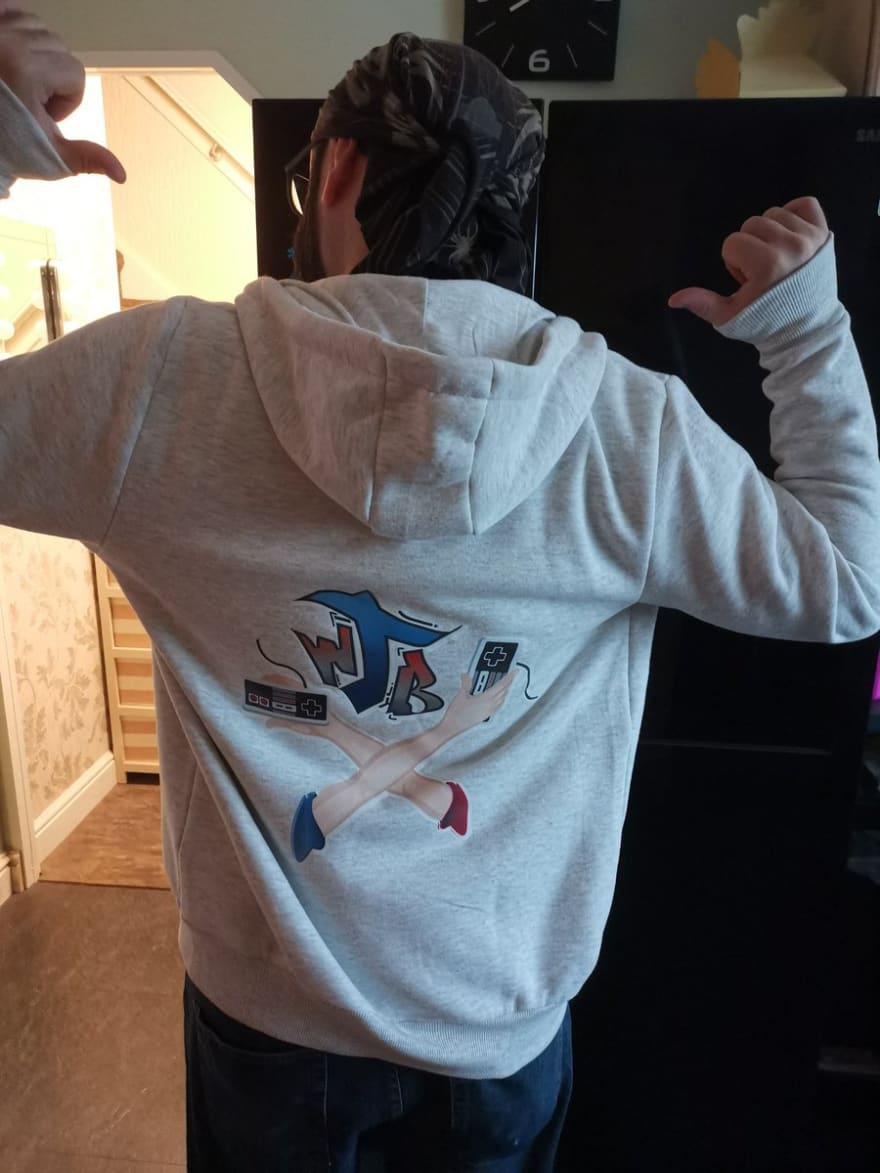 And so we begin our journey to London for #EGX2019.

If you spot us (either during our journey, or whilst we're there) do say hello. We'll be wearing these incredibly limited edition hoodies, as moddeled by me.

What Do You Use?

If you're rocking a FOSS OS

what do you use for media creation? I'd love to hear about other applications that I can use to potentially increase my productivity or create higher quality media.

I've intentionally left off the majority of the tools that I use for my day to day client work for a number of reasons:

Let's swap suggestions in the comments.

So, you want to control your android from your linux desktop?

How to use Beautiful Soup in AWS Lambda for Web Scraping

Why PoP OS is my favorite Linux Distro?

Jamie
Serial podcast creator and .NET Core maniac. Can often be found talking about everything and nothing on one of the many podcasts that he produces (only one of them is about .NET Core, honest)
Why still write articles to teach JavaScript?
#javascript #discuss
Setting Up an Ubuntu 22.04 Workstation for Software Development and Content Creation
#linux #beginners #development #ubuntu
Merging Pull Requests Like a Pro With Mergify
#programming #git #productivity #tutorial