Containers are collection of Operating System technologies that allows you to run a process. Containers are themselves a very old technology, but after introduction of Docker and the software system they built to create, deploy and ship containers, it has made containers to be opted widely. We will look at atomic units needed to build a container without docker so that you can get past the definitions like "light weight VM", "something to do with docker", "poor man's virtualization".

So what technologies do we need to create our own containers?

Well, let's first look at what an OS does for us essentially. An OS runs processes, an entity which represents the basic unit of work to be implemented in the system. There is a Process Control Block which is a table maintained by OS in which it identifies each process with the help of a special number known as PID (process ID). It also has status of process along with privileges, memory information, environment variables, path, child processes etc. Every process has a certain root directory in which process executes. You can actually find this information in a folder called /proc in the file system or by running a command:

There's a lot more to each of this, but we're gonna stay focused on high level overview of Linux systems.

Now if we are able to create a process and isolate it such that it run somewhere else too without installing the whole operating system, we can call it a container. To isolate this process, i.e. make it impossible for it to look outside it's own folder, we need to "jail" it. We can do it using the following command:

It will change the root folder for this process and it's children, hence the process will not be able to access anything outside this folder. let's follow some steps as super user:

Here we have created a new folder and then using chroot command to “change the root” and run command bash in it.
You should see some error like bash is not found or command not recognized. Refer following screenshot:

Since command bash is running inside my-new-root and it cannot access anything outside it's new root, it is unable to find program that runs the bash shell.
To fix this, use ‘ldd’.
ldd prints the shared other objects required by an program to run.

This command outputs dependencies for a certain program needed to run:

let's copy these in their respective folders inside my-new-root.

Here we have created 3 folders in which shared libraries that are required by bash reside (under lib and lib64). Then we are copying those objects into them.

Now if we run chroot my-new-root bash it will open up a bash shell inside my-new-root. You can verify it by pwd it should output /

Why don't you try enabling ls command in this too?

Even though our new root cannot access files outside, it can see still running processes on host container. This won't work for us if we want to run multiple containers on the same host. To achieve true isolation, we also need to hide the processes from other processes. If it’s not done then one container can kill PID of process, unmount a filesystem or change network setting for other containers. Each process lie in one of 7 namespaces defined in UNIX world. We can use a command called unshare to see those: 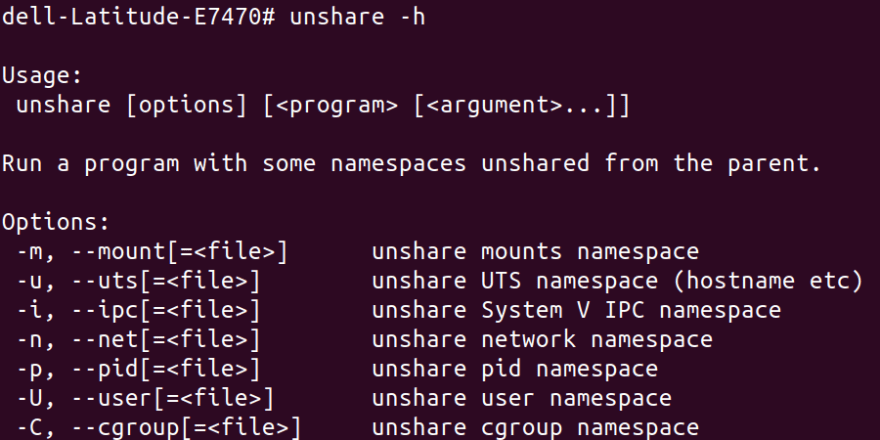 We can see the important 7 namespaces above. We can use unshare command to restrict those namespaces.

Now our new root has restricted access to processes from any of these namespaces. They can now get duplicate PID too! That's true isolation.

One last thing left, namespace don't help us limit physical resources like memory limits. For them we have cgroups, which essentially is a file in which we can collect PIDs and define limits for cpu, memory or network bandwidth. The reason it is important because one container can starve the resources (like by fork bomb attack) of host environment for use by other containers.

Note: Windows operating systems are not vulnerable to a traditional fork bomb attack, as they are unable to fork other processes.

Here's how we'd do it (Don't worry about commands, we're just learning things that containers are made from)

You can learn more about cgroups here

That's it! Now we have created our own container.

Images are essentially the premade containers packages as a file object.
We can use the following command to package this container as a compressed file:

Now we can ship it somewhere else and we would create a folder to decompress it:

That's it? Means we can go around and use containers like this. Not really, docker does a lot more than this for you. It provides us an awesome registry of pre baked images, networking, import, export, running, tag, list, kill these images etc.

An example of above process written in go programming language can be found here and it's accompanying video.
We'll look at all of this in coming posts. Thank you for making it to end of the post.

Please share it if helped you learn something new. You can drop me a hello on twitter. Take care :)

Guide to drag and drop in svelte from scratch

Once suspended, dpkahuja will not be able to comment or publish posts until their suspension is removed.

Once unsuspended, dpkahuja will be able to comment and publish posts again.

Once unpublished, all posts by dpkahuja will become hidden and only accessible to themselves.

If dpkahuja is not suspended, they can still re-publish their posts from their dashboard.

Once unpublished, this post will become invisible to the public and only accessible to Deepak Ahuja 👨‍💻.

Thanks for keeping DEV Community safe. Here is what you can do to flag dpkahuja:

Unflagging dpkahuja will restore default visibility to their posts.