This article was originally published at https://www.blog.duomly.com/rest-api-vs-graphql-comparison/

Into to REST API vs. GraphQL

Since GraphQL was presented as a revolutionary alternative to RESTful API in 2015, there is a discussion between both solutions' supporters and opponents. As everything, RESTful API and GraphQL both have pros and cons, which need to be considered selecting proper solutions for the next project.

And as always, the choice should depend on the type of project that you are building. For some kind on the application, RESTful API will be a justified solution, when for the other type, GraphQL will be much better.

In this article, I’d like to explain what is RESTful API, and what is GraphQL deeper. Next, I’d like to go through the most significant differences between them.

What is REST API?

REST API is a software architectural style or design pattern for API presented in 2000 by Roy Fielding. REST stands for Representational State Transfer, which means that the server transfers a representation of the state of the requested resource to the client after the API is called.

To make things clear, first, let me explain what an API is.

REST API communicates using HTTP requests with GET, POST, PUT and DELETE methods, to manage data, mostly used in web services development. With REST API, we are sending the request from one software to resource URI, and then the second software resends resources as JSON, XML, or HTML.

In RESTful API, everything is considered a resource, which means an object about which API can provide information. Consider Twitter, where resources can be, for example, a user or a tweet.

Let’s take a look at the graphic representation of how REST API works and what happens in the call background. 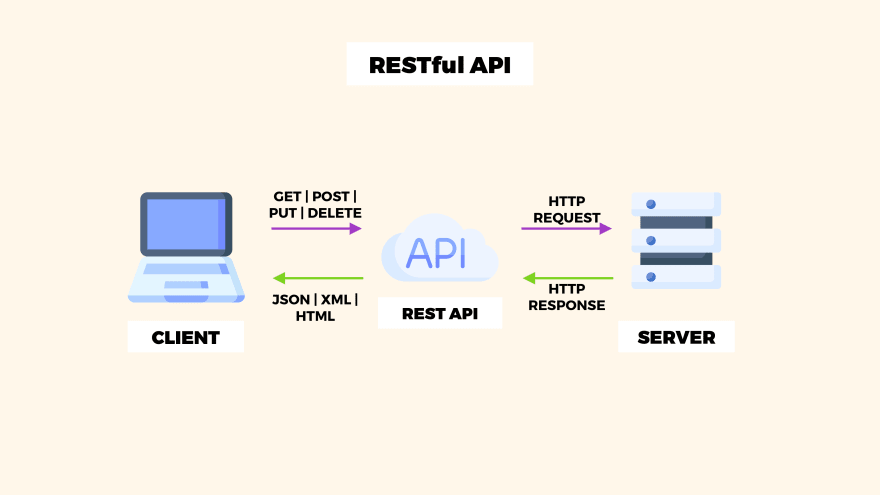 In the image, you can see that client is sending the request using one of the REST API methods, next server response with JSON, XML, or HTML data.

To make the API fully RESTful, we need to think about the set of constraints when we create it. Let’s go through the set of rules that help create the RESTful API that will be easy to use and understand.

Anatomy of the REST API request

A REST API request can consist of 4 elements, but not each of them is required. Each API call needs an endpoint, which is the URL we request for. An endpoint consists of root-endpoint and path which determines the resource we are asking for.

Let’s take a look at the example.

The next element required for the REST API call is the method. In this step, you have to consider what action will be performed. There are four most commonly used methods in the REST API:
GET - to get data from the server
POST - to create a new element
PUT - to update data
DELETE - to delete element

The next two elements of the REST API calls are not required, but very useful. Headers are used to pass additional data for different purposes like authentication or content type. And the last element is the body, which contains data that we want to send to the server.

GraphQL was released in 2015 by Facebook, and it’s an open-source query language that helps us design, create, and consume API more efficiently. It’s strong competition for REST API.

In GraphQL, we send queries to the server and return JSON formatted data to the client. It was designed to solve issues with flexibility and efficiency, which sometimes happen with REST API.

When we define those queries, we are defining the shape of data that we will get as a response. We don’t need to ask for everything in the GraphQL query; we can select the data that will be useful in a particular call and get just the resources we need.

Another feature of GraphQL is the hierarchical nature, which means that data in the queries and responses reflect natural relationships between the objects. If user is related to orders, we can ask for the user's orders inside the user object.

When we are using GraphQL, we need to define schemas, which are models of data that can be requested. The schema describes what fields the object has with the types, and it also defines what kind of queries can be sent.
When we have schemas defined, we can compare it with the queries to ensure that we will get the server's response.

When the GraphQL query is sent to the server, it’s interpreted against the schema and resolves the client's data. 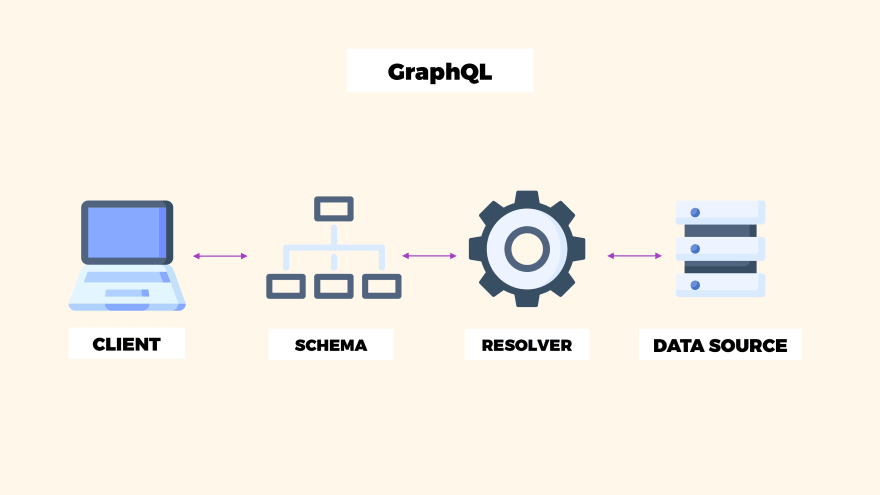 In the image above, you can see that the query is sent from the client, and it’s validated to the schema, then it’s resolved with the data source and returned to the client.

GraphQL may have three basic types of operations:
query - to read data
mutation - to save data
subscription - to receive real-time data

When we have an overview of REST API and GraphQL, let’s go throng the differences between both technologies, so we will be able to draw some conclusions.

Differences between REST and GraphQL

Let’s take a look at the differences between REST API and GraphQL.

In REST API, there are multiple endpoints, and we are fetching resources by calling different paths for different kinds of data. For example, when we are calling http://api.com/users we call users resource, but we cannot call the same endpoint to get all the comments that the user wrote on the blog. For that, we have to call another endpoint http://api.com/users/:id/comments.

In GraphQL, there is just one endpoint; usually, it’s http://api.com/graphql. Requests are defined based on the queries or mutations. We can ask for different resources on the same endpoint, just chaining the query.

RESTful API is susceptible for over and under fetching, which is a very common issue with this API architecture.

Overfetching happened in a situation when we have to get more data that we exactly need. For example, when we want to just list users by username, we don’t need to get all data about users; we just need names. In REST API, it’s impossible to get just needed data.

Underfetching is a similar problem, but it happens when one endpoint provides less data that it’s necessary. Imagine a situation when we need to list posts of certain users. We need user data and posts. In that case, we have to call two endpoints for one view.

In GraphQL, we can create the query in a way that provides all the necessary data for a certain view, not too much, not too little. It helps reduce the number of HTTP requests, which improves the application's performance and security.

When using REST API, you can sometimes realize v1 or v2 in the endpoints, which means that more versions of the API are created. It makes the code less readable and maintainable. In GraphQL, we can easily add new fields to the schema or mark the old ones as deprecated, and as a result, there’s no need for versioning.

Both REST API and GraphQL are great solutions for API, and both have their strengths and weaknesses.

GraphQL allows us to avoid under and over fetching, it’s just with just one endpoint, and it’s very easy to update.

On the other hand, REST API takes advantage of HTTP caching, content types, and status codes. It is still used very ofter in big and small projects, but it’s very important to know how to design and develop REST API, to make it efficient and understandable.

From my point of view, if you are a beginner without great knowledge in REST API, it’s safer to build GraphQL API because it’s easier to make it properly. But if you have time to research and learn, you could think of building your solution with REST.

And what’s your favorite method to build an API?

Thanks for reading,
Anna

Duomly
We believe everyone can learn how to code, so we are making learning fun and easy!
5 Ways Small Business Owners Make Good Money With IT
#startup #productivity #codenewbie #webdev
What Is Idea Validation - How to Figure Out if Your Mobile App Idea Is Profitable
#startup #tutorial #productivity #webdev
53 Profitable App Ideas You can Build: Quickest Way to $10K+ per Month
#mobile #android #ios #javascript

Once suspended, duomly will not be able to comment or publish posts until their suspension is removed.

Once unsuspended, duomly will be able to comment and publish posts again.

Once unpublished, all posts by duomly will become hidden and only accessible to themselves.

If duomly is not suspended, they can still re-publish their posts from their dashboard.

Once unpublished, this post will become invisible to the public and only accessible to Duomly.

Thanks for keeping DEV Community 👩‍💻👨‍💻 safe. Here is what you can do to flag duomly:

Unflagging duomly will restore default visibility to their posts.