Why I Decided to Become a Web Developer

One year ago today, a friend approached me talking about programming and he changed my life. As of January 21,2019, I had been working two jobs while barely getting by. I had been diagnosed with depression a few months ago and was working through it but I needed and extra push to turn my life around. A few months earlier, I had started improving my Graphic Design skills on Coursera.com, but wasn't entirely engaged. My friend's advice on switching to programming intrigued me enough to start this journey. Before we get into that, I'm going to elaborate on the backstory that led me to this change in careers, my post-Graduation years.

Graduating from college in 2014 was a great feat for me because I always considered that going to university was going to be challenging for me. I had started studying music because I was passionte about it and I didn't want to have to work at an office job once I graduated. Two years into my music mayor, I decided to switch majors to Audiovisual Communications. I took that decision based on the fact that I sucked as a musician. At the time, I had been making You Tube videos for a somewhat successful channel, so it made sense to me to make the change. I knew nothing of film or TV but was very excited to learn and get up to speed with the film knowledge that I lacked.

Two years later, I was graduating, with a Part-Time, soon to be Full-Time job at a local TV Station and I had never felt more productive and efficient in my life.
However, life as an adult started draining my motivation away until almost 3 years later, I decided to quit my job and move to the West side of Puerto Rico to look for something different.

I was living off my savings for almost half a year (and helping my girlfriend with a Newspaper delivery job that took away our sleep for almost a year) until I got a part-time job at another TV Station as a Master Control Operator. I say it was part-time, but really I was just called to cover sick Operators or whenever one was out for vacation. A few months later, Hurricane Maria happened and I was lucky enough to pull through it unlike many others that had to leave the island. In December of that year, my girlfriend had to quit her job because our car had broken down and we would not be able to continue. She was out of a job, we had no car for the next three months, and I wasn't getting called that much to the station. We barely got to fix our car by spending all our savings. In February, I was hired part-time handing out newspapers at different street lights in a town called Mayaguez. The job was tough, the sun was hot, the rejection was maddening and my work conditions in general sucked. Regardless, I was getting called more each day to the TV Station and things where looking up somewhat.

By the end of the year, I decided to visit the psychiatrist and was diagnosed with depression, I was struggling financially despite having two jobs, a college education and had been learning French and Japanese, and reading all kinds of books ever since I graduated from college. The latter was something I was really proud of but had not pushed me further career-wise. I was really frustrated but with the help of antidepressants and a newfound interest in Graphic Design, I would try to pull through and achieve a better career. Enter January 2019.

When I got home on that January morning, I must have written on Google something along the lines of "How to code" and had gone into Codecademy and begun my coding journey. Slowly, but surely I began researching for other sites, started reading on Medium, setting up my environment through other people's guidance. My first coding language was actually Python, since I didn't know yet what direction I wanted to take, I started with whatever stood out at the moment, but a week or two later, I wasn't too sure how I could use Python to make anything so I decided to switch to HTML, CSS and JavaScript. That's when it all clicked, being able to see some actual output on my screen served as the biggest motivation for continuing to study. Throughout my coding journey, I discovered many different resources and diverged from my main path a little bit, by trying other technologies like SQL and Ruby, but always came back to JavaScript because one needs to learn well whichever technologies one chooses. I'm not going to go into too much detail on what I used to learn on this article, but just a few weeks ago I wrote about that so you can read that here: 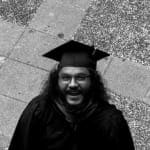 What I Used to Learn to Code

I have been carefully writing this for a month now, and I'm at a different place than I was last month. I have been working as a Web Developer for the Center of Puerto Rican studies, which is part of The City University of New York. I was lucky that my first job was a remote position. I learn every single day on the job. I've learned how to use Drupal, Sass and Vue.js and try to write better code each day. My journey's just begun, so I'm hoping that my journey lasts long and that I can continue learning new tech and improving on the skills I already know. If you've gotten this far, thanks for reading.

Top 5 reasons to choose DevOps as a Career 💎

Once suspended, edgarnegronrabell will not be able to comment or publish posts until their suspension is removed.

Once unsuspended, edgarnegronrabell will be able to comment and publish posts again.

Once unpublished, all posts by edgarnegronrabell will become hidden and only accessible to themselves.

If edgarnegronrabell is not suspended, they can still re-publish their posts from their dashboard.

Once unpublished, this post will become invisible to the public and only accessible to Edgar A Negron.

Thanks for keeping DEV Community 👩‍💻👨‍💻 safe. Here is what you can do to flag edgarnegronrabell:

Unflagging edgarnegronrabell will restore default visibility to their posts.