When solving real-world coding problems, employers and recruiters are looking for both runtime and resource efficiency.

Knowing which data structure best fits the current solution will increase program performance and reduce the time required to make it. For this reason, most top companies require a strong understanding of data structures and heavily test them in their coding interview.

Brush up on your Python programming skills like data structures, recursion, and concurrency with 200+ hands-on practice problems.

What are data structures?

Data structures are code structures for storing and organizing data that make it easier to modify, navigate, and access information. Data structures determine how data is collected, the functionality we can implement, and the relationships between data.

Data structures are used in almost all areas of computer science and programming, from operating systems, to front-end development, to machine learning.

Data structures are vital building blocks for efficient, real-world problem-solving. Data structures are proven and optimized tools that give you an easy frame to organize your programs. After all, there's no need for you to remake the wheel (or structure) every time you need it.

Most data structures in Python have modified forms of these or use the built-in structures as their backbone.

Now, let's see how we can use these structures to create all the advanced structures interviewers are looking for.

Python does not have a built-in array type, but you can use lists for all of the same tasks. An array is a collection of values of the same type saved under the same name.

Each value in the array is called an "element" and indexing that represents its position. You can access specific elements by calling the array name with the desired element's index. You can also get the length of an array using the len() method.

Unlike programming languages like Java that have static arrays after declaration, Python's arrays automatically scale up or down when elements are added/subtracted.

For example, we could use the append() method to add an additional element on the end of an existing array instead of declaring a new array.

This makes Python arrays particularly easy to use and adaptable on the fly.

Queues are a linear data structure that store data in a "first-in, first-out" (FIFO) order. Unlike arrays, you cannot access elements by index and instead can only pull the next oldest element. This makes it great for order-sensitive tasks like online order processing or voicemail storage.

You can think of a queue as a line at the grocery store; the cashier does not choose who to check out next but rather processes the person who has stood in line the longest.

We could use a Python list with append() and pop() methods to implement a queue. However, this is inefficient because lists must shift all elements by one index whenever you add a new element to the beginning.

Instead, it's best practice to use the deque class from Python's collections module. Deques are optimized for the append and pop operations. The deque implementation also allows you to create double-ended queues, which can access both sides of the queue through the popleft() and popright() methods.

Stacks are a sequential data structure that acts as the Last-in, First-out (LIFO) version of queues. The last element inserted in a stack is considered at the top of the stack and is the only accessible element. To access a middle element, you must first remove enough elements to make the desired element at the top of the stack.

Many developers imagine stacks as a stack of dinner plates; you can add or remove plates to the top of the stack but must move the whole stack to place one at the bottom. 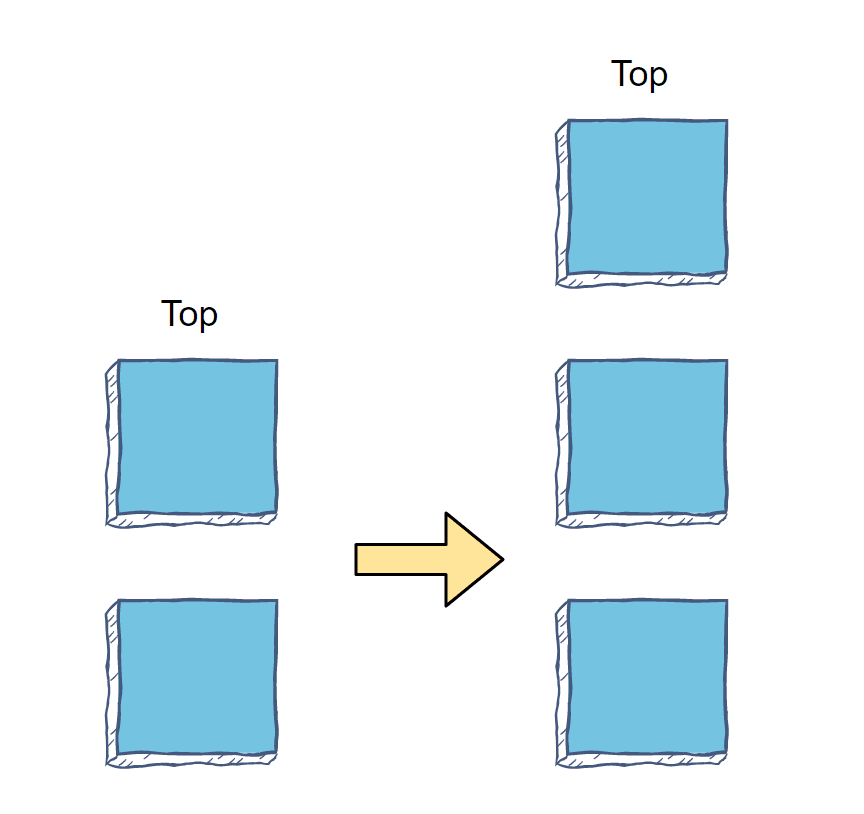 Linked lists are a sequential collection of data that uses relational pointers on each data node to link to the next node in the list.

Unlike arrays, linked lists do not have objective positions in the list. Instead, they have relational positions based on their surrounding nodes. 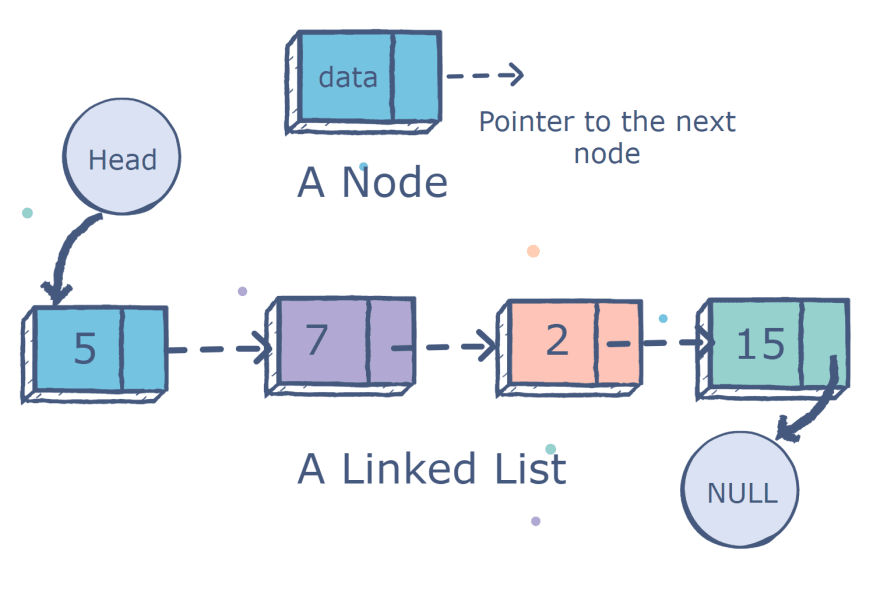 Linked lists can be singly or doubly linked depending if each node has just a single pointer to the next node or if it also has a second pointer to the previous node.

You can think of linked lists like a chain; individual links only have a connection to their immediate neighbors but all the links together form a larger structure.

Python does not have a built-in implementation of linked lists and therefore requires that you implement a Node class to hold a data value and one or more pointers.

Linked lists are primarily used to create advanced data structures like graphs and trees or for tasks that require frequent addition/deletion of elements across the structure.

The primary downside of the standard linked list is that you always have to start at the Head node. The circular linked list fixes this problem by replacing the Tail node's null pointer with a pointer back to the Head node. When traversing, the program will follow pointers until it reaches the node it started on.

The advantage of this setup is that you can start at any node and traverse the whole list. It also allows you to use linked lists as a loopable structure by setting a desired number of cycles through the structure. Circular linked lists are great for processes that loop for a long time like CPU allocation in operating systems.

Practiced knowledge of data structures is essential for any interviewee. Educative's text-based courses give you hundreds of hands-on practice problems to ensure you're ready when the time comes.
Ace the Python Coding Interview

Trees are another relation-based data structure, which specialize in representing hierarchical structures. Like a linked list, they're populated with Node objects that contain a data value and one or more pointers to define its relation to immediate nodes.

Each tree has a root node that all other nodes branch off from. The root contains pointers to all elements directly below it, which are known as its child nodes. These child nodes can then have child nodes of their own. Binary trees cannot have nodes with more than two child nodes.

Any nodes on the same level are called sibling nodes. Nodes with no connected child nodes are known as leaf nodes. 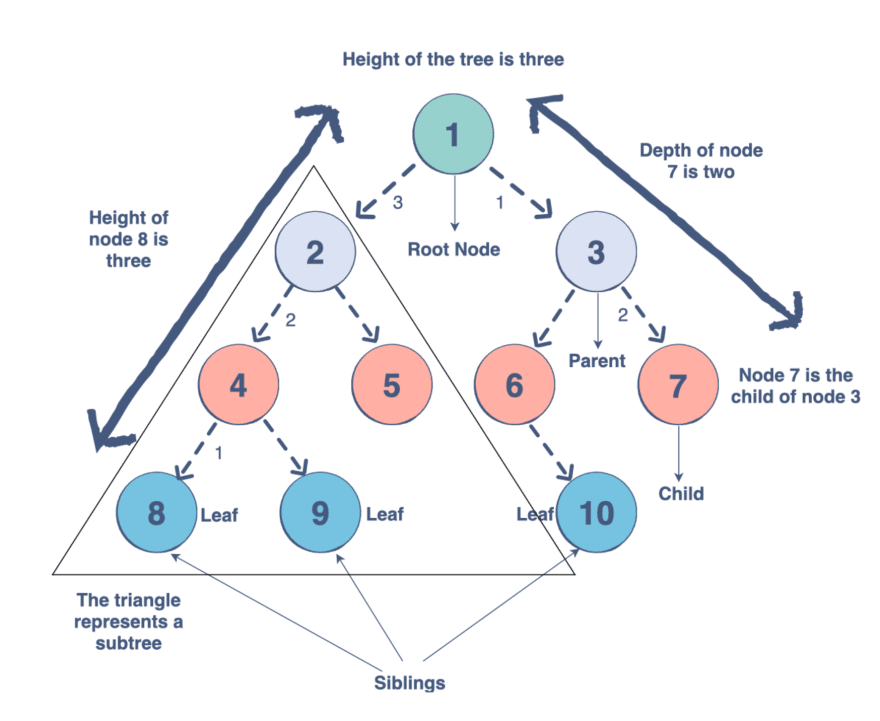 The most common application of the binary tree is a binary search tree. Binary search trees excel at searching large collections of data, as the time complexity depends on the depth of the tree rather than the number of nodes.

Graphs are a data structure used to represent a visual of relationships between data vertices (the Nodes of a graph). The links that connect vertices together are called edges.

Edges define which vertices are connected but do not indicate a direction flow between them. Each vertex has connections to other vertices which are saved on the vertex as a comma-separated list. 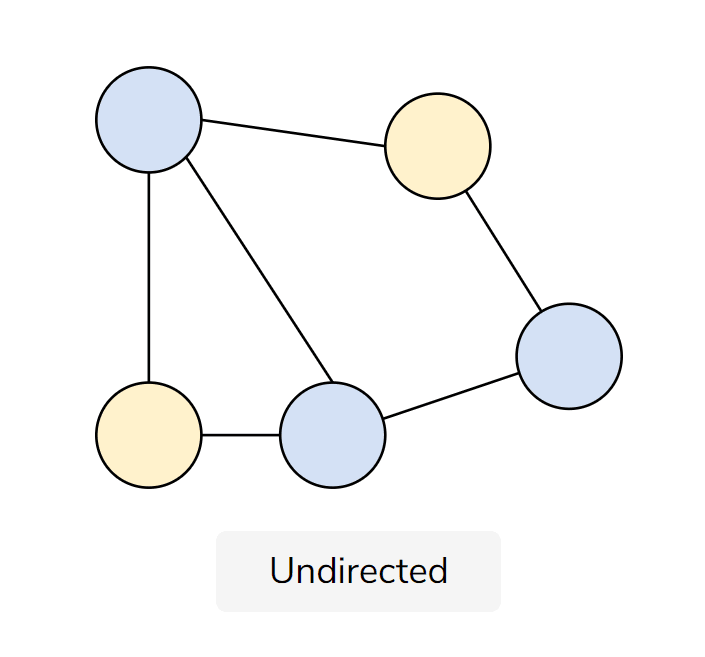 There are also special graphs called directed graphs that define a direction of the relationship, similar to a linked list. Directed graphs are helpful when modeling one-way relationships or a flowchart-like structure. 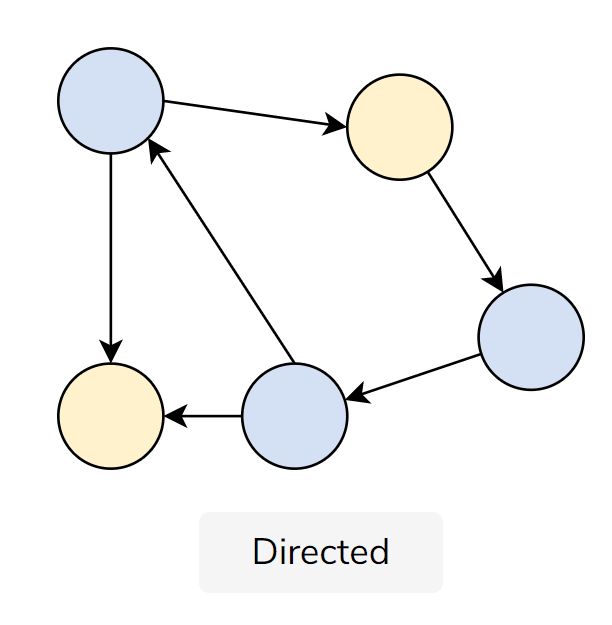 They're primarily used to convey visual web-structure networks in code form. These structures can model many different types of relationships like hierarchies, branching structures, or simply be an unordered relational web. The versatility and intuitiveness of graphs makes them a favorite for data science.

When written in plain text, graphs have a list of vertices and edges:

In Python, graphs are best implemented using a dictionary with the name of each vertex as a key and the edges list as the values.

This data structure uses key/value pairs, where the key is the name of the desired element and the value is the data stored under that name.

Each input key goes through a hash function that converts it from its starting form into an integer value, called a hash. Hash functions must always produce the same hash from the same input, must compute quickly, and produce fixed-length values. Python includes a built-in hash() function that speeds up implementation.

The table then uses the hash to find the general location of the desired value, called a storage bucket. The program then only has to search this subgroup for the desired value rather than the entire data pool.

Beyond this general framework, hash tables can be very different depending on the application. Some may allow keys from different data types, while some may have differently setup buckets or different hash functions.

Here is an example of a hash table in Python code:

There are dozens of interview questions and formats for each of these 8 data structures. The best way to prepare yourself for the interview process is to keep trying hands-on practice problems.

To help you become a data structure expert, Educative has created the Ace the Python Coding Interview Path. This curated Learning Path includes hands-on practice material for all the most discussed concepts like data structures, recursion, and concurrency.

By the end, you'll have completed over 250 practice problems and have the hands-on experience to crack any interview question.