Each paradigm takes a very different approach to how code is structured. In this article, we'll break down what exactly each programming paradigm is and what it's typically used for. Hopefully, by the end you will have started to form some opinions of your own. Let’s get started!

What is functional programming?

Functions are treated as primitives. Primitives serve as the simplest elements of a programming language. Thus, a function can be:

A goal of functional programming is to write pure functions whenever possible.

A pure function does not change the global state of the program and therefore is said to have no side effects. Instead, its return value is solely based on its input parameters.

Pure functions enable numerous compiler optimizations, leading to significantly reducing a program’s execution time. Furthermore, pure functions are ideally suited for unit testing. We can unit-test a pure function in isolation without having to worry about where in the code it will be used.

Instead of iterative loop constructs, such as for and while, in functional programming, we use higher-order functions and tail calls for a recursive loop.

A higher-order function takes a function as its input, performs an operation on the input function, and subsequently returns a function.

Key reasons for preferring recursion over typical primitive loops are:

Immutability is the permanence of a variable once the data is assigned to it.

In summation, functional programming is a declarative programming model that communicates what the program does without specifying the flow of control. It uses pure functions, immutable variables, and tail-call recursion. This results in code that is easier to understand, debug, and unit-test. Furthermore, functional programming enables numerous compiler optimizations for an increase in program execution speed and reduction in memory requirements.

What is object-oriented programming?

In contrast to functional programming, object-oriented programming (OOP) is an imperative paradigm. This means that the code describes how the program should achieve a result in a step-by-step process. These statements procedurally change the program’s state.

The term state, in OOP, refers to any set values plus the alterations made to them over the course of the program.

For example, this figure represents how OOP may represent a car as a group of properties and methods. 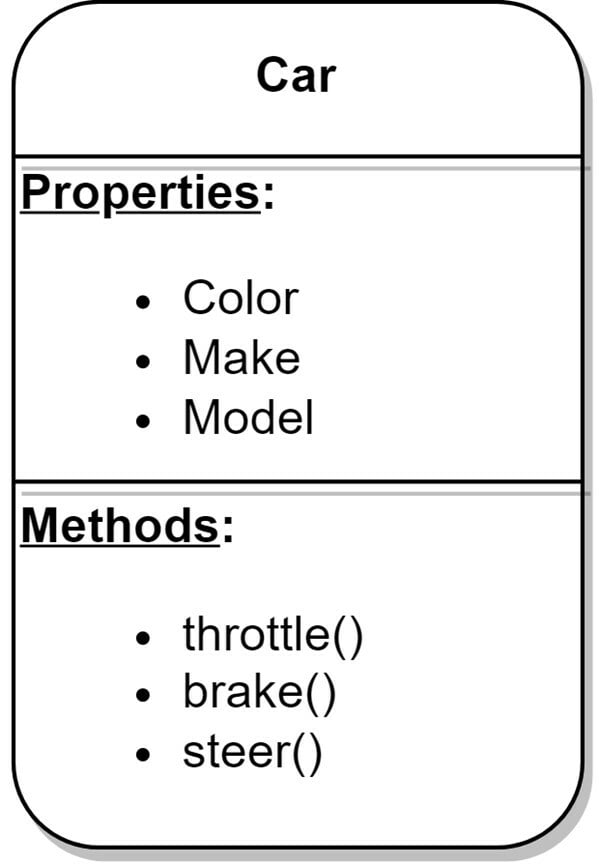 The four pillars of object-oriented programming

A common question you may see in interviews is to identify the four pillars of OOP. The four pillars are encapsulation, abstraction, inheritance, and polymorphism. It is important to recognize these tenets when studying object-oriented programming as they are all interconnected.

Grouping functions and variables allows for functions to be called with few to no parameters, as the variables are incorporated as a part of the object.

Confining certain parameters and functions to an object ensures that any future changes made to the abstracted members of a class will have no impact on the rest of the classes. Thus, making extension and improvement of a program easier.

In Java, this inheritance is notated by the keyword extend. The parent class from which another class is extending is called a superclass or a base class. For instance, the Toyota and Ford classes may be extensions of the Car class. Whereas, Ford Mustang is an extension of the Ford class. In this case, common code to both Toyota and Ford can be written once in their superclass Car.

Polymorphism is based on an object’s relationships with other objects and how members of a superclass are being extended in its derived classes. This again reduces redundancy and increases reusability. Polymorphism is a complex concept; if you are interested in learning more, we encourage you to check out the Educative course: Learn Object-oriented programming in Java.

Each pillar of OOP is important in its own right, but the pillars are dependent on one another. Encapsulation is a necessary feature for abstraction and inheritance to be possible. Additionally, polymorphism cannot exist without inheritance. Each of the four pillars is integral to the paradigm. OOP as a whole functions through objects with self-contained properties and methods, and their relationships with other objects.

When to use object-oriented or functional programming

Python is one of the most popular languages, and it represents a middle-ground on this spectrum of mutable to immutable or object-oriented to functional. Python has built-in types that are immutable: strings, numbers, and Booleans, to name a few. Custom classes in Python, however, are typically mutable data. With a language like Python, it is almost entirely up to the programmer as to what paradigm they use primarily.

OOP is currently the paradigm used by most developers, mostly for its accessibility. Functional programming is great for the server side of applications, data manipulation, and web crawling. For example, all of Facebook’s spam filtering was built using functional programming in Haskell. For the most part, there is no clear-cut answer as to what paradigm will serve you best in your software development education and career. Good software engineers use techniques and habits that can be prescribed to both object-oriented programming and functional programming.

Even if you primarily code in an OOP environment it can benefit you to implement some functional programming constraints. In doing so, you may find that your code is clearer and easier to debug. One of the biggest barriers to making an effective, easy-to-use API is repetitive code, so learning and practicing functional programming concepts now may pay dividends in the future.

When deciding what paradigm to develop a new program in, it can be beneficial to create a roadmap for how the program may change in the future. If your program has a set number of operations to be performed on entities, and you intend to grow the application by adding more entities, an object-oriented approach makes the most sense. If instead, you have a fixed number of entities and intend to add more operations, functional programming will create fewer problems during scaling.

At its simplest, functional programming uses immutable data to tell the program exactly what to do. Object-oriented programming tells the program how to achieve results through objects altering the program’s state. Both paradigms can be used to create elegant code. From an OOP perspective, you may be sculpting something out of clay, modeling it after the real world. Through functional programming, it more closely resembles stacking building blocks together to eventually create a cohesive piece.

So where should you go from here? If you want help acing an object-oriented programming job interview you can check out the course: Grokking the Object-Oriented Design Interview.

Continue learning about functional programming and OOP on Educative

Do you prefer functional programming or OOP? Was this article helpful? Let us know in the comments below!

Why Do Developers Prefer Linux?

How to build and run a C Program

Once unpublished, this post will become invisible to the public and only accessible to Hunter Johnson.