Reactive systems allow for the unparalleled responsiveness and scalability that we need in our high data flow world. However, reactive systems need tools and developers specially trained to implement these unique program architectures. Spring WebFlux with Project Reactor is a framework specially built to meet the reactive needs of modern companies.

Today, we'll help you get started with WebFlux by explaining how it fits with other reactive stack tools, how it's different, and how to make your first app.

Pick up the tools and techniques you need to land a job with hands-on practice.

What is a Reactive System?

Reactive Systems are systems designed with a reactive architectural pattern that prioritizes the use of loosely coupled, flexible, and scalable components. They're also designed with failure resolution in mind to ensure most of the system will still operate even if one fails.

The most notable difference between reactive and other web patterns is that reactive systems can execute multiple unblocked calls at once rather than having some calls wait for others. Reactive systems, therefore, speed up performance and responsiveness because each part of the web application can do its part sooner than if it had to wait for another part.

What is Project Reactor?

Project Reactor is a framework built by Pivotal and powered by Spring. It implements reactive API patterns, most notably the Reactive Streams specification.

If you’re familiar with Java 8 Streams, you’ll quickly find many similarities between a Stream and a Flux (or its single-element version, Mono). The main difference between them is that Fluxes and Monos follow a publisher-subscriber pattern and implement backpressure, while the Stream API does not.

Backpressure is a way for data endpoints to signal to the data producer that it is receiving too much data. This allows for better flow management and distribution as it prevents individual components from getting overworked.

The main advantage of using Reactor is that you’re in total control of the data flow. You can rely on the subscriber’s ability to ask for more information when it’s ready to process it, or buffer some results on the publisher’s side, or even use a full push approach without backpressure.

In our reactive stack, it sits below Spring Boot 2.0 and above WebFlux: 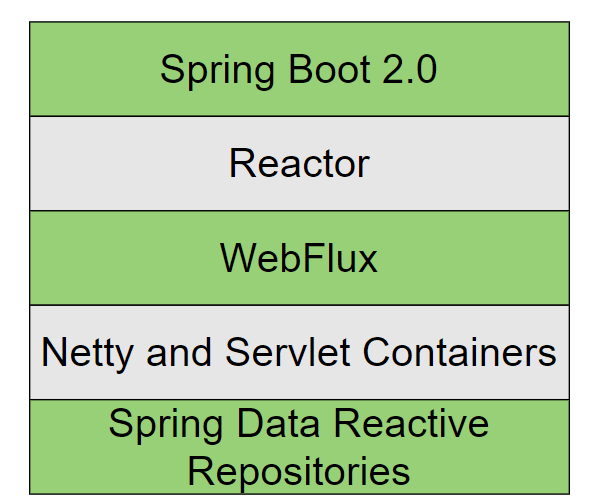 Stack: A tech stack is a combination of software products and programming languages used to create a web or mobile application. The reactive stack is the same but for creating reactive applications.

What is Spring WebFlux?

Spring WebFlux is a fully non-blocking, annotation-based web framework built on Project Reactor that makes it possible to build reactive applications on the HTTP layer. WebFlux uses a new router functions feature to apply functional programming to the web layer and bypass declarative controllers and RequestMappings. WebFlux requires you to import Reactor as a core dependency.

WebFlux was added in Spring 5 as a reactive alternative to Spring MVC, with added support for:

Ultimately, WebFlux does away with SpringMVCs thread-per-request model and instead uses a multi-EventLoop non-blocking model to enable reactive, scalable apps. With support for popular servers like Netty, Undertow, and Servlet 3.1+ containers, WebFlux has come in as a key part of a reactive stack.

RouterFunction is a functional alternative to the @RequestMapping and @Controller annotation style used in standard Spring MVC.

We can use it to route requests to the handler functions:

You can use the RouterFunctions.route() to create routes instead of writing a complete router function. Routes are registered as Spring beans and therefore can be created in any configuration class.

Router functions avoid potential side effects caused by the multi-step process of request mapping and instead streamline it to a direct router/handler chain. This allows for functional programming implementations of reactive programming.

RequestMapping and Controller annotation styles are still valid in WebFlux if you are more comfortable with the old style, RouterFunctions is just a new option for your solutions.

WebClient is WebFlux's reactive web client built from the well-known RestTemplate. It is an interface that represents the main entry point for web requests and supports both synchronous and asynchronous operations. WebClient is mostly used for reactive backend-to-backend communication.

You can build and create a WebClient instance by importing standard WebFlux dependencies with Maven:

Reactive Stream API is an imported collection of functions that allow for smarter stream data flow. It has built in support for back-pressure and asynchronous processing that ensures the application makes the most efficient use of both computer and component resources.

There are four major interfaces in Reactive Stream API:

WebFlux is supported on Tomcat, Jetty, Servlet 3.1+ containers, as well as on non-Servlet runtimes such as Netty and Undertow. Netty is most commonly used for async and non-blocking designs, so WebFlux will default to that. You can easily switch between these server options with a simple change to your Maven or Gradle build software.

This makes WebFlux highly versatile in what technologies it can work with and allows you to easily implement it with existing infrastructure.

WebFlux is built with non-blocking in mind and therefore uses a different concurrent programming model from Spring MVC.

Spring MVC assumes threads will be blocked and uses a large thread pool to keep moving during instances of blocking. This larger thread pool makes MVC more resource-intensive as the computer hardware must keep more threads spun up at once.

WebFlux instead uses a small thread pool because it assumes you'll never need to pass off work to avoid a blocker. These threads, called event loop workers, are fixed in number and cycle through incoming requests quicker than MVC threads. This means WebFlux uses computer resources more efficiently because active threads are always working.

WebFlux uses Spring Security to implement authentication and authorization protocols. Spring Security uses WebFilter to check requests against an authenticated list of users, or it can be set to automatically refuse requests that fit criteria like origin or request type.

This is a minimal implementation that sets all settings to default. Here we can see that the user has a username, a password, and one or more roles tags that allow them a certain level of access.

Get Started with Spring WebFlux

Now let's get hands-on with WebFlux. First, we'll need to set up a project.

We'll use Spring Initializr to generate a Maven build with the Spring Reactive Web dependency.

This will generate a pom.xml file that looks like:

Now you have everything you need to continue! From here we'll add some components to make a Hello-World app. We'll just add a router and a handler, which are the minimum requirements to create our basic WebFlux app.

First, we'll create an example router to show our text once at the URL http://localhost:8080/example. This defines how the user can request the data that we'll define in our handler.

Now we'll add a handler that listens for any user that requests the /example route. Once the router recognizes that the requested path matches, it sends the user to the handler. Our handler receives the message and brings the user to a page with our greeting.

Now we'll run our application by executing the Maven target spring-boot:run. You'll now be able to visit http://localhost:8080/example in your browser to find:

Next steps for your learning

Now that you've finished your first basic app, you're ready to move onto some more advanced topics and applications. Some next concepts to explore are:

Educative's new course Full Reactive Stack: Spring Boot 2 & Spring WebFlux covers each of these topics to take your Spring WebFlux learning to the next level. With live coding environments, this course lets you skip project setup and dependency management and get right to learning with hands-on projects.

By the end, you'll know how to create apps using all the software commonly used in a reactive stack.