Both merge and rebase are excellent tools in the Git toolset, and each is associated with their own distinct use cases, despite being confused and misused sometimes. This usually happens because of team rules that were originally created to help and guide, but often get in the way of simplicity.

Most of the way the people use Git come from their culture and experience as developers. There is really no merge vs rebase, but there is always the right thing to do in a given situation. One might find a rebase more appropriate under certain circumstances, whereas merging could be more helpful eventually.

From the Git documentation:

The use case of the merge operation is associated with the idea of moving forward. Common goals will include:

The most common example of merging two histories together is the integration of a topic branch onto a parent branch, which is usually done by a remote provider like GitHub:

Following the same principle, one can also update the topic branch with its parent before resuming work or being ready to merge upwards:

Git will also do its best to merge code seamlessly, but sometimes it just needs help stitching pieces together. Those times are known — and feared — as conflicts. A good thing about merge commits though, is that conflicts are resolved at the merge level, regardless of the commits within; and as the nature of merging lies in moving forward, once conflicts are dealt with, they will never bug again.

Although a fast-forward merge makes the history look cleaner after the merge process, there is a drawback: one will never know something was merged, because the merged commits will simply be appended after the base tip without information about their parent branches. Some teams, however, will not see this as a disadvantage, and will actually promote fast-forward merges — and with it, comes the need to rebase often.

From the Git documentation:

git-rebase - Re-apply commits on top of another base tip

The use case of the rebase operation is associated with the idea of rewriting and cleaning up. Common goals will include:

Rebase is also very useful in a few not-so-common or advanced scenarios:

Both the merge and rebase operations can be used to update a branch with some other history. In the case of rebase, we're literally rebasing an existing history from a base point.

The figure above demonstrates the most common use case of a rebase operation: update a topic branch with the latest history in the cleanest way possible. Note, however, "cleanest" also means rewriting history with similar, nevertheless distinct commit objects.

Rebasing a branch will, invariably, rewrite its history.

As said before, some teams will just prefer a cleanly linear history of commits, and that will require people to master rebasing and always merge with the fast-forward strategy. The example above will repeat itself every time someone needs to rebase their branch until they're ready to merge it.

Another thing to consider when rebasing is that it may discard or rewrite objects pushed by other people, be it regular commits or merge commits with any conflict resolutions attached. Such action is strongly discouraged, since it will interfere with things whose authorship is not of the person doing the rebase. Once rebased, a branch should be warned about once Git finds it disconnected from the remote counterpart, thus requiring one to force-push (git push --force) the branch in order to upload it to the remote. 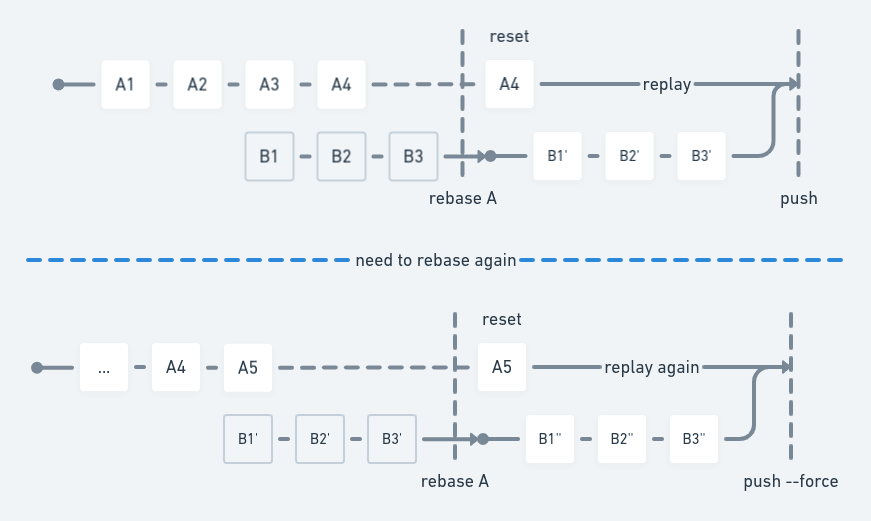 Taking history in consideration, a rebase operation will often omit the event in which someone had updated their branch with newer history, since replaying a branch leaves a linear commit log.

After force-pushing a branch with the intention of keeping a clean and linear history, users with less experience with Git may unknowingly pull a more recent version of a branch on top of itself using a regular git pull, thus causing a confusing -- and unnecessary -- merge commit. This is particularly common with graphical user interfaces that translate clicks to hidden Git commands.

To prevent that, git pull --rebase will reset the branch to its state in the remote then re-apply any newer commits on top of it -- which is usually the original intention. This behavior can be set as default in the Git configuration:

What should I do?

As a general rule, it all boils down to the team's experience with Git, and how everyone intends to see their contributions converging to a common goal.

Evandro Myller
Business-centric software engineer and manager.
Run README.md in your terminal
#programming #opensource #productivity #bash
We are trending on Github, This is how we did it 🤯
#discuss #javascript #webdev #productivity
Use No-Code REST API Security Testing
#tutorial #programming #security #discuss

Once suspended, emyller will not be able to comment or publish posts until their suspension is removed.

Once unsuspended, emyller will be able to comment and publish posts again.

Once unpublished, all posts by emyller will become hidden and only accessible to themselves.

If emyller is not suspended, they can still re-publish their posts from their dashboard.

Once unpublished, this post will become invisible to the public and only accessible to Evandro Myller.

Thanks for keeping DEV Community safe. Here is what you can do to flag emyller:

Unflagging emyller will restore default visibility to their posts.