In Data Structures, a Stack is an abstract data type that serves as a collection of items. A stack has two core operational principles: pop and push. The data type got its name from its behavior where similar to a real-world stack, a stack ADT only allow operations from one end.

Due to its behavior, the stack is called a LIFO data structure. LIFO stands for Last In First Out, where the last element put in the storage is the first one to be popped out. 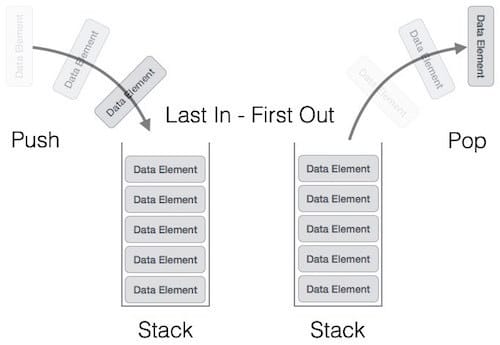 Enough with the texts, let us see the code in action.
We will cover the following JavaScript topics in this challenge:

First, we define our class using the "class" keyword and declare a constructor function to create an empty array when the class is first initialized.

Typically, the class name begins with a capital letter. However, this is just a widely adopted naming convention and not a syntax requirement. Note, the constructor function does not require the "function" keyword. This is true for all functions declared inside the class. Another point worth noting is that functions declared inside a class are referred to as methods and are accessible from outside of the class by default.

Methods inside the class

Next, we add methods to perform the different operations on the stack.

Working with the Stack

First, we initialize a new instance of the stack by using the "new" keyword and assign that to a variable. This creates an empty stack as the constructor inside the class is called immediately.

After that, we can use the various methods in our class instance to perform the various operations.

Note, you can work with more than one stack by creating new instances of the "Stack" class using the "new" keyword and assigning that to different variables.

That is all we need to create a functional Stack in Javascript!

Once suspended, erickarugu will not be able to comment or publish posts until their suspension is removed.

Once unsuspended, erickarugu will be able to comment and publish posts again.

Once unpublished, all posts by erickarugu will become hidden and only accessible to themselves.

If erickarugu is not suspended, they can still re-publish their posts from their dashboard.

Once unpublished, this post will become invisible to the public and only accessible to Eric Karugu.

Thanks for keeping DEV Community 👩‍💻👨‍💻 safe. Here is what you can do to flag erickarugu:

Unflagging erickarugu will restore default visibility to their posts.