Disclaimer
The post contains the thoughts of a preliminary investigation on how Angular works reading some parts of the source code, debugging a simple application and reading how the compiler works. Some terms or definition could be wrong.

This post comes along with a presentation written in markdown, rendered via reveal.js and available on GitHub.

What is rendering architecture? It is the pair compiler:runtime. Angular framework is composed of two main parts:

Ivy is an enabler.

The incremental DOM is the foundation of the new rendering engine.

Every component gets compiled into a series of instructions. These instructions create DOM trees and update them in-place when the data changes.

Each compiled component has two main sets of instructions:

Change detection is basically a set of instructions added at compile time. The developer's life is made easier since he is aware only of the variable binding in the Angular template declarative.

Both React and Vue are based on the concept of Virtual DOM to create a component and re-render it when change detection happens.

Render the DOM is a very expensive operation when a component is added to the DOM or changes happen, the repaint operation has to take place. Virtual DOM strategy aims to reduce the amount of work on the real DOM and so the number of times the user interface needs to be repainted.

Tip
The end-user sometimes does not realize the complexity behind the rendering of a user interface. A simple click can generate HTTP requests, changes in the component, changes in other components and so on. Single change for the user can be a complex set of changes that must be applied to the DOM.

DOM manipulations happens every time a new component is going to be added, removed or changed from the DOM, so instead of operating directly on the DOM it operates on a JSON object called Virtual DOM. When a new component is added or an existing one removed, a new Virtual DOM is created, the node added or removed and the difference between Virtual DOMs is computed. A sequence of transformations is applied to the real DOM.

React documentation advice is to use JSX, a syntax extension to JavaScript, to define React elements. JSX is not a template language. A template is an enriched JavaScript expression that is interpreted at runtime. Plain JavaScript can also be used instead of JSX.

Virtual DOM technique has some disadvantages:

It is the foundation of the new rendering engine. Each component template gets compiled into creation and change detection instructions: one to add the component to the DOM and the other one to update the DOM in-place.

The amount of memory required to render the DOM is proportional to the size of the component.

Tip
The compiled template component references some instructions of the Angular runtime which holds the implementation.

Ivy can be enabled in an existing project with the latest Angular version but also directly scaffold a project with Ivy.

Enable Ivy in an existing project

both the Angular core and the CLI will be updated at the latest release candidate. One interesting thing to notice is the "aot": true in the angular.json workspace configuration file:

AOT compilation with Ivy is faster and should be used by default.

Then add the angular compiler options in the tsconfig.app.json:

To start a new project with Ivy run:

in Angular 8 with Ivy enabled, it gets compiled into the following code:

In Angular 8 with Ivy, the Angular decorators were compiled into static fields in the decorated class. So @Component becomes ngComponentDef static field. Back to View Engine, the ngc compiler produces .ngfactory separated files for each component and modules. With Ivy the code produced by the compiler is moving into component class static fields.

The elementStart(), elementEnd(), etc are the component referenced instructions, every component is its own factory, the framework does not interpret the component.

All the not referenced instructions at compile time are removed from the final application bundle.

Tip
The View Engine runtime is a single monolith interpreter that is not tree-shakable and has to be entirely shipped to the browser. Differently, Angular Ivy runtime is an instruction set that is a set of rendering functions like an assembly language for templates.

In Angular 9 RC5 and Ivy instead the compilation is a bit different:

The new Ivy engineering has been driven by three main goals: tree-shaking, locality, and flexibility.

Tree-shaking is the operation of removing dead code from the bundle so if the application does not reference some of the runtime rendering function, they can be omitted from the bundle making it smaller.

Dead code comes from libraries, Angular included. Angular CLI is powered by Webpack Terser plugin as tree-shaker that, in turn, receives information from Angular Build Optimizer Plugin about which code is used and which not. The Angular compiler simply does not emit those instructions, the plugin can gather information about component referenced instructions so can instruct Terser about what to include/exclude in/from the bundle.

While the @angular/core framework is tree-shakable, the View Engine runtime is not, it cannot be broken into small pieces and this is mainly due to the static Map<Component, ComponentFactory> variable.

The Angular 8 compilation pipeline started by ng build prod --aot is composed of five phases where the tsc and the ngc generates the template factories. ngc compiles the libraries as well. Ivy enables Incremental compilation that is libraries can be compiled and deployed on npm.

Tip
The compiler should use only information provided by component decorator and its class and nothing else. This simplifies the overall compilation process, no more component.metadata.json and component.ngfactory.json that requires complex management in the compilation pipeline.

Locality is a rule. Ivy compilation introduces the concept of component/directive public API: an Angular application can safely refer to components and directives public API, no more needed to know much about dependencies since extra information are added to .d.ts component files.

Add a library to the monorepo where your application is running ng generate library mylib.

Compile the library with ng build mylib, the following files are produced:

Notice as well that this new message is displayed in version 9 due to Ivy activation:

This is the component generated by the Angular CLI:

The metadata file mylib.metadata.json is not generated anymore, metadata are now part of the definition files.

Definition file of the component:

Definition file of the module:

and the definition file of the service:

Add a property to the component

Add to the library component an input field:

The alias phone-number will be added to the input property providing additional metadata for the public API. The compiler generates the following definition file:

The property phone-number is the name part of the public API while phone is the private name, an implementation detail. Since it can change, the code must be compiled every time to emit, in case, an error if there is a property name mismatch. For this reason, the current Angular version must rely on global compilation.

Angular Ivy instead relies on the public API, so library code can be compiled and safely shipped to npm.

The input property is bound to a DOM property in the template.

When the browser loads the page, it “reads” (another word: “parses”) the HTML and generates DOM objects from it. For element nodes, most standard HTML attributes automatically become properties of DOM objects.

The Angular compiler transforms the decorators and the templates into JavaScript instructions not only to create elements into the DOM but also extra content properties and attributes used by the runtime to "keep-alive" the application. 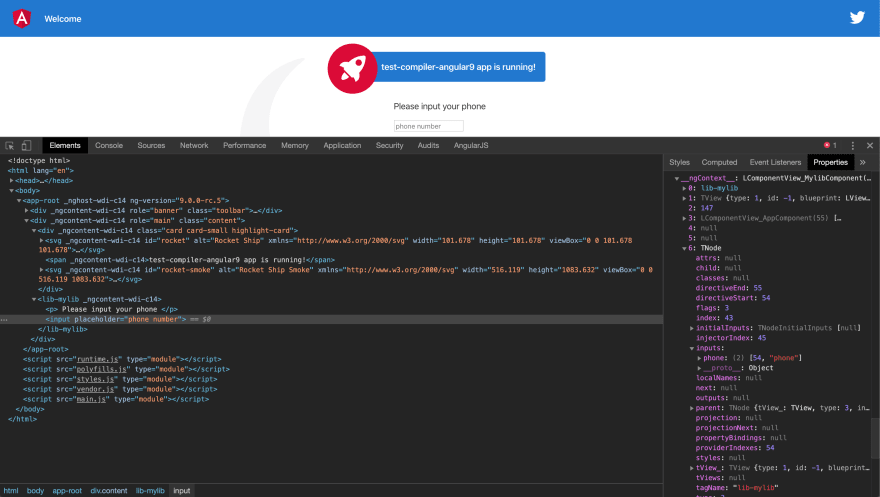 Angular Ivy is more flexible than View Engine because if new features are introduced in Angular new instructions will be implemented in the set. Ivy is easier to be extended and optimized.

The compilation of an Angular application is just half of the process since the libraries the application depends on having to be made compatible with the new runtime.

ngcc (Angular compatibility compiler) is a new compiler that convert and compile the libraries. Libraries compatible with ViewEngine, the previous rendering engine of Angular, are converted into Ivy instructions so that the "library can participate in the Ivy runtime" and be fully compatible.

The new compiler has been implemented to make libraries compatible with the new format without obliging maintainers to rewrite important parts of them and, moreover, not all the applications need to be compatible with Ivy.

In Angular version 9 Ivy is enabled for application only and ngcc is used to convert existing libraries making them Ivy compatible. Over time application will start to become more and more Ivy compatible and so the libraries, then ngcc will not be any more necessary. Libraries can be converted on the fly into Ivy compatible libraries during the build or installation process.

The incremental transition from version 9 to version 11 will make ngcc only required for some few cases:

ngcc-validation project is the way the Angular team tests the libraries' compatibility.

Angular is an enabler, it will allow more improvement about performance not only for the build but also for the application. Since version 2 Angular has a component lazy loading feature but just at router level. Lazy loading at component level requires a lot of boilerplate code and some patches to make it work.

With Angular Ivy will be much simpler. Consider the following example: click on an image, lazy load the bundle and add the component to the view. Lazy loading improves the speed of an application. Ideally it will be:

View Engine obliges to pass via the ComponentFactoryResolver to resolve the lazy component into a factory and to load it:

To evaluate the bundle size improvement, the Angular team uses a metric{: .italic-red-text} the Hello World application. Building with Angular Ivy, the final minimized bundle is ~4.5kB and ~2.7kB with Closure Compiler.

Angular Elements can be then bundled more efficiently and, moreover, Ivy is ready for future bundlers/optimizers.

A new API has been added to the global ng object. In the ChromeDevTools just open the console and type ng to see the new options:

From the Elements tab just select the element of the debug action, a $0 will appear close to it, it can be used as selector/placeholder for the element in the console. 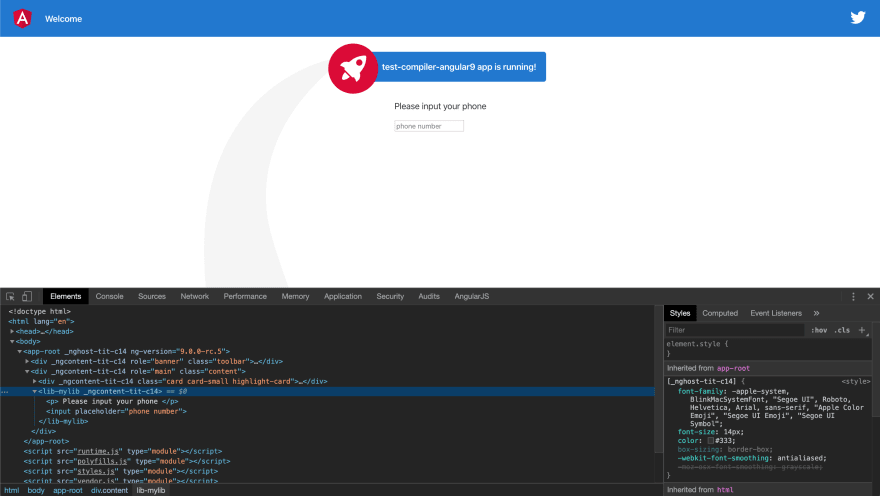 NgProbe will not be probably supported anymore:

In Ivy, we don't support NgProbe because we have our own set of testing utilities with more robust functionality.

Angular team has done an amazing job, it was really a pleasure to attend the Angular Connect 2019 and see the improvement done on the new rendering architecture introduced last year.

Development can be done now with aot compilation enabled by default to avoid possible mismatches between the development and the production environment.

Another interesting point is the Angular Elements. I think the project can now really speeds up thanks to the new compiler and rendering engine. Currently, it is not possible to create a library project and compiler it as web components, this will really a killing feature. Moreover, the generated web components have "too much Angular inside", they are a bit too big, Ivy should reduce the amount of the framework that wraps an Angular component.

Really impressive is the lazy loading that could be achieved in a very simple manner, powerful but keeping the readability of the code simple. 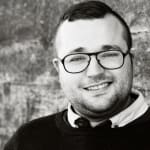 for the peer review and for having found some inaccuracies between Angular 8 and Angular 9 with Ivy enabled.

How to connect Integromat with ActionForms.io