⚠️ DEV.to video player is in beta doesn't play for people resulting in an error code but do not worry because we also upload our videos to youtube so here is the youtube link to this video.. If you do happen to go to our YouTube consider giving us a subscribe because it helps us to produce more free video content.

So at ExamPro, we have lots of video content and instead of using an existing provider to serve On-Demand Video Streaming we rolled our own on AWS. This allows us to have full control over the data and also allows us to have a video pipeline for pennies than using a third party provider. 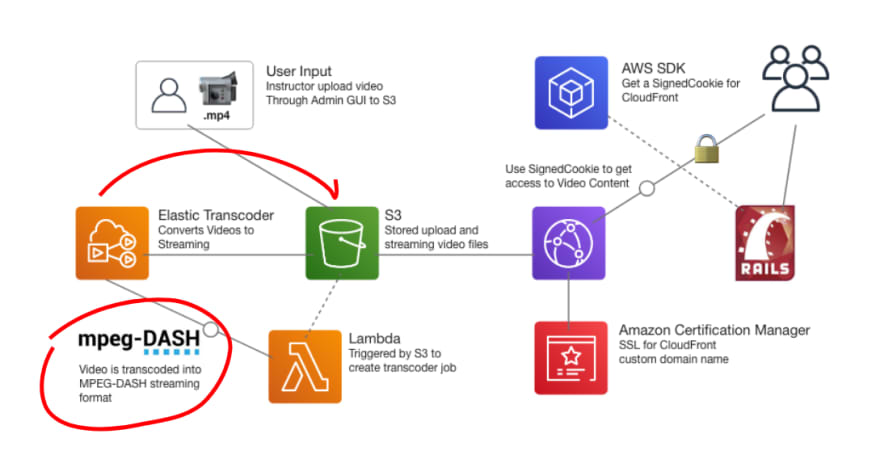 You did hurt my feelings. I just want to share my AWS knowledge.

I have to agree with OrlandoCo, not because I want to hurt your feelings, but because they have very valid point.

I was very excited to try and get into the world of AWS/Azure and get in on the buzz on functions and next-gen cloud design choices. In the end, I was horrified at the price of bandwidth. Storage is cheap, but it's expensive to get it out of their datacentres.

Being a hobbyist programmer and filmographer, I need a plcae to host my films. They're 1-3 GB each. I calculated that every time some downloads this film from a cloud provider, it will cost me 10-30 cents.

Now, put this into perspective with a VPS company such as Hetzner who give you a free 20TB of traffic a month, with a surcharge of 1 euro per TB, while giving you a production ready server, SDDs and all for two euros a month.

No brainer. I would rather set up a Linux VPS, Postgres database, Node.js installation, nginx than to create a conceptually sound API that costs me high heaven. From what I've heard, many companies end up returning back to in-house hosting after seeing the bill, but it's a very controversial topic.

I feel that cloud services are a bit like React, striving for design perfection, but impractical in the end (animation libraries have to hack past React to get any decent performance).

This is just my two cents.

EDIT: And while CDNs help take off the load, they also cost something. Cloudfront offers 50GB, and then $0.085 per GB. Practically the same pricing as normal data-out pricing.

npm ERR! Unexpected end of JSON input while parsing near

PWA - Why should you use it and not use it?

15 Fun APIs For Your Next Project

We are AWS Obsessed and create both free and paid learning material.
We have study material for all 10 AWS Certifications on our custom LMS platform with flashcards, white paper summaries, journey paths and exam simulator.