Recently I decided to extend my capabilities to start working as a full-stack web developer. My first goal was to figure out which skills I am going to choose among the popular ones these days and complete my skillset for full-stack development.
Some of the web application development skills I already possess, while some new things I have to learn. I have a sound grip in HTML and CSS for creating User Interfaces. I also know JavaScript and I can utilize it in both front-end and back-end development. Coming towards the front-end frameworks, I decided to start with Angular.
Prior knowledge of TypeScript can be good, to work with Angular. But if someone doesn’t know TypeScript, it can be learned easily along the way. TypeScript is sometimes called a variant of JavaScript. So I felt familiar with it as I have experience working with JavaScript.

Angular’s support for Progressive Web Apps, its Modularity and efficient support for Asynchronous Programming are the main attractions for me to choose Angular. 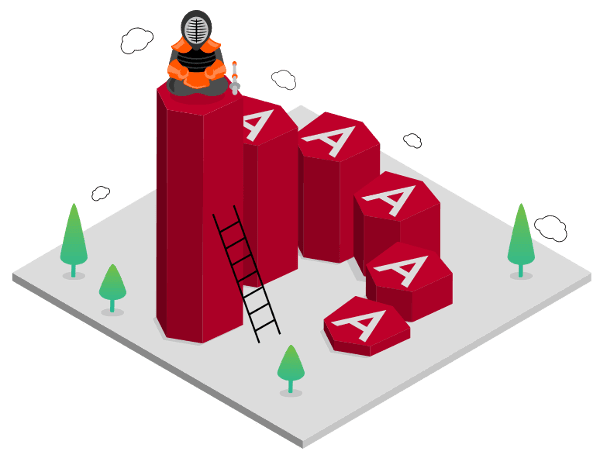 I am new to Angular and writing this to help other newbies who are finding ways to get started with Angular. The track I followed was recommended to me by an experienced full-stack developer. As I was suggested, I started learning Angular with the help of Angular official documentation.

Get Started with Angular

First tutorial: Basic Angular app is a simple e-commerce site. This tutorial provides a ready-made app that can be modified interactively in the browser, without any software installations at your own computer. It serves as a good starting point.
Second tutorial: Tour of Heroes app tells how to set up a local development environment and develop a sample app to learn the fundamentals of Angular.

Both these tutorials help understanding the topics listed below:

How Long Did It Take Me to Learn

It took me one week to complete these tutorials and do the coding practice. After completion, I feel equipped with the basic Angular concepts and the best practices to apply those concepts in any Angular app. Though these are just the basics and there will be many more things, coming my way to learn. I have got a solid foundation with the help of these tutorials and I have developed more interest to opt for Angular framework.

I would also suggest the beginners to use the official Angular guide and go for the tutorials, which I mentioned earlier. It is indeed a good place to start learning Angular.

I’ll be waiting for the responses to know if you find it helpful and worth your time. Open to suggestions, as this is my first writing at DEV community.

Once suspended, farhatsharifh will not be able to comment or publish posts until their suspension is removed.

Once unsuspended, farhatsharifh will be able to comment and publish posts again.

Once unpublished, all posts by farhatsharifh will become hidden and only accessible to themselves.

If farhatsharifh is not suspended, they can still re-publish their posts from their dashboard.